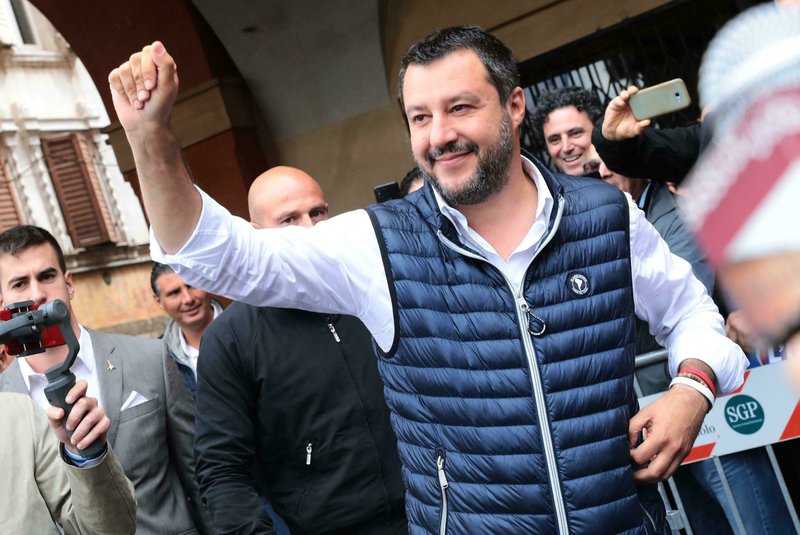 The German aid group Sea-Watch said the 47 migrants were transferred to Lampedusa on Sunday evening with the cooperation of the Coast Guard and financial police. They were among 65 migrants rescued off the coast of Libya last week.

Salvini had given permission for 18 migrants — mostly families with young children — to be brought to land on Friday. But he told a campaign rally that the rest would not be allowed into Italy as long as he remained on the job.

Salvini reacted angrily to the transfer of the remaining 47, saying on Facebook that if “there was a ploy to disembark the migrants, I will take action, because that is aiding and abetting human trafficking.”

Salvini pledged that the vessel, the Sea-Watch 3, would be confiscated and threatened the ship’s crew with arrest, referring to them as “deputy human traffickers.”

He also questioned whether the transport minister, who is in charge of the Coast Guard, or the economy minister, with responsibility for the financial police, had given their approval for the move. The transport minister belongs to the populist 5-Star Movement, which is in a government coalition with Salvini’s right-wing League party, while Italy’s economy minister is not aligned with either ruling party.

Sea-Watch said its ship was too big to enter Lampedusa, requiring the transfer from the Italian vessels, and had been ordered to another port on a “probationary confiscation.”

Salvini said the rescue ship should be taken out of use permanently and sunk.

Salvini has taken a hard-line against humanitarian rescue operations, accusing them of aiding migrant traffickers in Libya who pack migrants into unsafe boats and launch them into the dangerous Mediterranean Sea. His position has created numerous standoffs with fellow European Union nations and humanitarian groups as Europe struggled to decide where to bring the desperate migrants.

Sea-Watch said it was the fourth migrant disembarkation in Italy from civilian rescue ships this year, proving “once more that the talk of closed ports is just that: Talk.”

The head of the Sea-Watch 3 mission, Philipp Hahn, called the probationary confiscation of the vessel “outrageous,” and said the group broke no laws.

“On the contrary, we have once more upheld the law of the sea and the Geneva Refugee Convention,” he declared.

The migrants were welcomed on shore by Lampedusa residents carrying banners reading “Welcome to Lampedusa,” and “Whoever saves one life, saves the entire world,” Sea-Watch said.

In a May 15 letter to Italy’s government released Saturday, the U.N. High Commissioner for Human Rights urged Italy to withdraw its decree closing its ports to migrants, calling it “yet another political attempt to criminalize search and rescue operations.”

The decree “further intensifies the climate of hostility and xenophobia against migrants,” said the letter, which was signed by several U.N. human rights rapporteurs.

Photo: Italian Deputy Premier and Interior Minister, Matteo Salvini, attends an election campaign rally in Sassuolo, Italy, Sunday, May 19, 2019. Salvini, the head of Italy’s right-wing League party, has positioned himself at the forefront of a growing movement of nationalist leaders seeking to free the European Union’s 28 nations from what he called Brussels’ “illegal occupation”. (Serena Campanini/ANSA via AP)