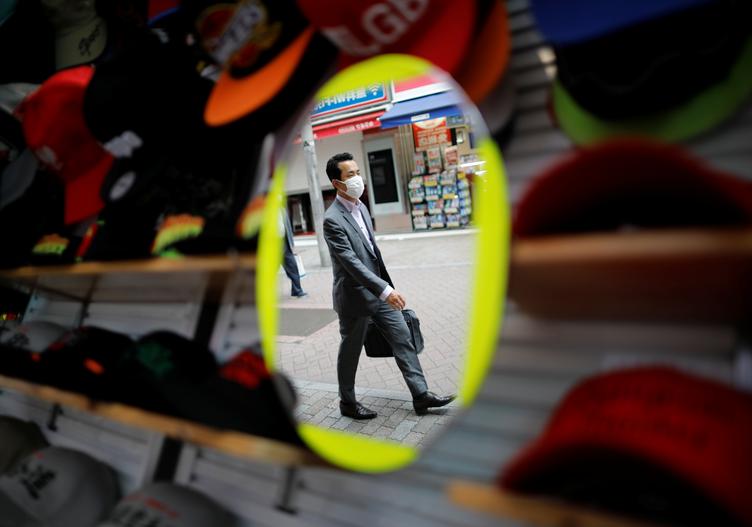 TOKYO (Reuters) – Japanese Prime Minister Shinzo Abe lifted a state of emergency for Tokyo and four remaining areas on Monday after the number of infections fell across the country, but warned that it could be reimposed if the virus started spreading again.

The move meant that the whole country would now have the social distancing curbs loosened, after an initial lifting of restrictions for most areas on May 14.

Abe said that the total amount of stimulus from two economic packages would exceed 200 trillion yen ($1.86 trillion) but it would still take considerable time to get back to normal life while controlling infection risks.

“Today we are taking a firm step towards the next stage following the removal of the state of emergency,” the visibly relaxed prime minister told reporters gathered in Tokyo.

Abe acknowledged Japan has faced some problems with its response and promised a review once the outbreak was over. But he also praised the “Japan model”, in which it brought the outbreak under control in six weeks without strict lockdowns imposed in other countries.

However, he warned that, “in the worst case scenario, there may be the unfortunate possibility of reimposing the state of emergency if the speed of infections rises again,” adding that he would like to avoid asking people to stay indoors.

The world’s third-largest economy has escaped an explosive outbreak with more than 16,600 infections and 839 deaths so far, according to NHK public broadcaster; however, the epidemic has tipped it into a recession and plunged Abe’s popularity to multi-year lows.

An Asahi newspaper poll conducted at the weekend showed Abe’s support rate at 29 percent – the lowest since he returned to power in late 2012 – and disapproval at 52 percent. The results mirrored a Mainichi newspaper survey published on Saturday.

Tokyo Governor Yuriko Koike has previously said the capital would move into “stage one” of loosening restrictions, once the state of emergency was removed. That would allow libraries and museums to reopen, and restaurants to stay open until later in the evening. Subsequent stages would see theaters, cinemas and fairgrounds reopen.

To support an economy on track for its deepest slump in postwar history, the government is considering fresh stimulus worth 100 trillion yen ($930 billion), mostly comprising financial aid for companies, the Nikkei newspaper reported on Monday.

The package, to be funded by a second supplementary budget, would follow a record 117 trillion yen spending plan deployed last month.

“The government and the Bank of Japan will continue to work as one to resolve the situation by adopting all necessary steps…we will underpin corporate financing of Japan firms by mobilizing an overwhelming amount of funds in an ‘all Japan’ fashion,” said Abe.

The combined stimulus would bring the total spending in response to the pandemic to about 40 percent of Japan’s gross domestic product.

The new package would include 60 trillion yen to expand loan programmes that state-affiliated and private financial institutions offer to firms hit by the virus, the Nikkei said. Another 27 trillion yen would be set aside for other aid including capital injections for ailing firms, the paper said.

The government is expected to approve the budget, which will also include subsidies to help companies pay rent and wages, at a cabinet meeting on Wednesday.

Japan’s economy slipped into recession in the last quarter, and analysts expect another 22% contraction in April-June.

Image: A passerby wearing a protective face mask is reflected in a mirror at a shop as the spread of the coronavirus disease (COVID-19) continues, at Shibuya shopping and amusement district in Tokyo, Japan May 25, 2020. REUTERS/Issei Kato