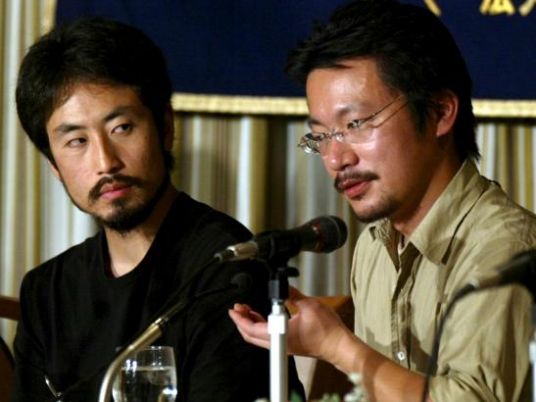 The Japanese government is seeking information after reports a Japanese freelance journalist is being held hostage in Syria and has been threatened with execution, Chief Cabinet Secretary Yoshihide Suga said on Thursday.
Paris-based Reporters Without Borders (RSF) said this week it had received information that an armed group holding journalist Yasuda Jumpei hostage had started a countdown for an unspecified ransom to be paid and had threatened to execute or sell him to another group if their demands were not met.
RSF said in a statement on its website that Yasuda was kidnapped in July by an armed group in an area controlled by the militant Nusra Front, al Qaeda's Syria wing, shortly after entering Syria earlier that month.
It urged the Japanese government to do what was needed to save Yasuda.
Suga said the Japanese government knew of the case but was not aware of any fresh developments.
"Given the nature of the matter, I would like to refrain from commenting on details," he told a regular news conference.
"The safety of our citizens is an important responsibility of the government, so we are making every effort and making full use of various information networks," Suga said.
The Islamic State militant group beheaded two Japanese nationals – a self-styled security consultant and a veteran war reporter – early this year. The gruesome executions captured the attention of Japan but the government said at the time it would not negotiate with the militants for their release.
Seiko Noda, a senior ruling party lawmaker, told Reuters this week that Prime Minister Shinzo Abe's defense policy shift to allow the military to fight abroad for the first time since 1945 could be used by militants as an excuse to attack Japan.
Noda is hoping to become Japan's first female prime minister after Abe's term expires.
Laws enacted in September will allow Japanese forces to help friendly countries, such as the United States, under attack based on the Abe administration's reinterpretation of the constitution. Such collective self-defense was banned by previous governments as a violation of the post-war charter.