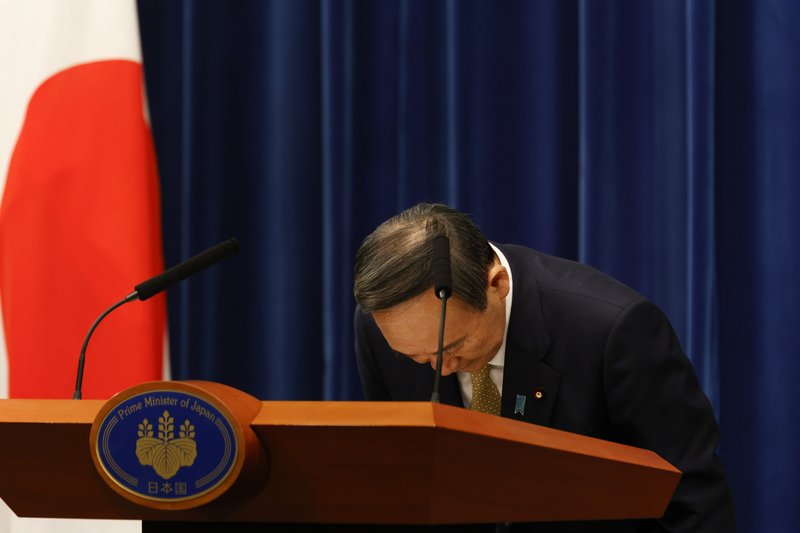 TOKYO (AP) — Japan expanded a coronavirus state of emergency for seven more prefectures Wednesday, affecting more than half the population amid a surge in infections across the country.

Prime Minister Yoshide Suga also said Japan will suspend fast-track entry exceptions for business visitors or others with residency permits, fully banning foreign visitors while the state of emergency is in place.

Suga’s announcement comes less than a week after he declared a state of emergency for Tokyo and three nearby prefectures. The new declaration, which adds seven other prefectures in western and central Japan, takes effect Thursday and lasts until Feb. 7.

“The severe situation is continuing, but these measures are indispensable to turn the tide for the better,” Suga told a news conference, bowing as he sought understanding from the public.

Suga said he put the seven prefectures in urban areas under the state of emergency to prevent the infections from spilling over to smaller cities where medical systems are more vulnerable.

The government is asking bars and restaurants in Osaka, Kyoto, Hyogo, Fukuoka, Aichi, Gifu and Tochigi prefectures to close by eight pm, employers to have 70 percent of their staff work from home and residents in the affected areas avoid going out for nonessential purposes.

Suga has been criticized as being to slow to act as the country’s number of reported coronavirus infections and deaths roughly doubled over the past month to about 300,000 and 4,100. Both states of emergency were declared only after local leaders had pleaded with him to do so.

Experts have warned that even the state of emergency measures, which are non-binding and largely rely on voluntary cooperation, may be insufficient to significantly slow the infections.

Unlike the earlier seven-week emergency Japan had in April and May last year, schools, gyms, theaters and shops will stay open.

Suga has faced criticism for not taking strong enough government action earlier in the outbreak. He mostly limited his interventions to asking the public to take basic safety measures such as wearing masks, washing hands and avoiding drinking and dining in groups until mid-December, when he finally announced the suspension of a government-subsidized tourism campaign.

Suga eventually took action after calls from the local leaders, while his support ratings nosedived in polls showing the public increasingly dissatisfied with his handling of the virus. He also came under fire for attending a pricy steak dinner that had eight participants in mid-December.

Suga took office in mid-September and pledged to keep the infections under control while also getting the economy back on track. He also promised to successfully hold the Tokyo Olympic, which were postponed from last year until this coming summer.

Despite the current surge in infections, Japan has reported far fewer infections than many countries of its size.

Japan made it through earlier surges in infections without a lockdown, but experts and officials warn that people are growing fatigued and are becoming less cooperative than before.

In a bid to more effectively enforce virus measures, Suga has said he will seek a legal revision in parliament next week to allow authorities to penalize business owners who defy official requests for coronavirus measures, while legally providing compensation to those who comply. Suga’s government also plans to revise the infectious disease control law so it can penalize patients who defy self-isolation requirements, hospitalization or cooperation with health authorities, Japanese media reports say.

Japan Medical Association President Toshio Nakagawa said at a news conference Wednesday that medical systems in the country have been collapsing, with regular daily treatment at many hospitals compromised due to the growing burden of coronavirus patients.

“I’m afraid a fear of explosive infections as in the US and Europe can become a reality,” he said, urging people to cooperate, regain their sense of crisis and urgency.

Japanese coronavirus measures have relied heavily on widespread mask wearing, contact tracing and other safety measures. But the number of new cases in the current outbreak has made contact tracing impossible, prompting Tokyo and neighboring prefectures to announce a cutback on the strategy to relieve the burden on local public health officials.

Experts have also raised concerns about cases of more contagious variant of the coronavirus that has spread across Britain. About 30 cases of the new variant have been detected since late December. Another variant was also detected in four people arriving from Brazil this week.

Image: Japan’s Prime Minister Yoshihide Suga bows during a press conference at the prime minister’s official residence Wednesday, Jan. 13, 2021, Tokyo, Japan. Suga announced that Japan has expanded a coronavirus state of emergency for seven more prefectures Wednesday, affecting more than half the population amid a surge in infections across the country. (Rodrigo Reyes Marin/Pool Photo via AP)

The world's most powerful passports for 2021