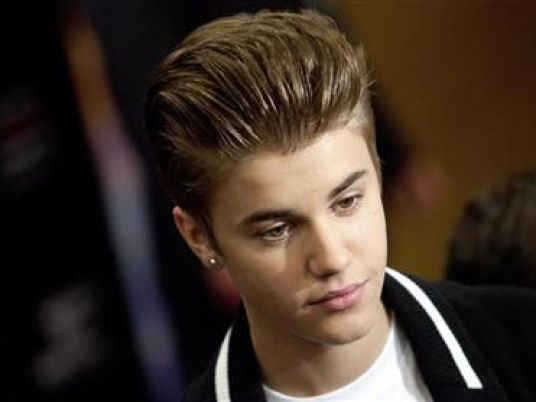 Justin Bieber is proving to fans that he has a new "Purpose" in life.
On the day of his latest album release, the beleaguered pop star fielded questions and performed tunes from "Purpose" in a series of sold-out fan events held Friday at Staples Center.
Bieber made his way to the rotating stage on a skateboard for the first of three engagements before taking requests from the crowd of mostly young female fans. The queries ranged from "Will you marry?" to "Are you happy?" Bieber answered affirmatively to both questions.
"I'm happy overall," said Bieber. "I'm a little stressed out, but I'm happy. I'm just being honest."
However, Bieber did appear perturbed when some overzealous attendees lobbed objects onto the stage, including a smartphone. He cautioned the crowd against it before returning the iPhone. One fan told Bieber she skipped school to attend the event and asked him for a photo.
"I would say school is important, but this is probably a little more important," joked Bieber. "Stay in school, kids."
Several fans asked Bieber about overcoming troubles. His redemption was a recurring topic during the 90-minute event. Earlier this month, Bieber received a favorable probation report after completing his sentence in a vandalism case filed after he damaged a neighbor's house with eggs.
"I just felt like I lost my place for a while," said Bieber. "I lost my purpose, and I wanted to just be light and let people know that whether you don't feel like you have a purpose, whether you're just trying to figure it out, there's a light at the end of the tunnel."
After the Q&A session, Bieber was joined by an acoustic guitarist and performed five songs, including new tunes "Sorry" and "What Do You Mean?"
In his first arena performance since releasing his fourth studio album, the 21-year-old singing sensation was admittedly a bit rusty. He lamented that a speaker delay was affecting his vocal ability. At one point, he forgot the words to "Love Yourself."
Bieber quickly rebounded and crooned a couple of songs while simultaneously skateboarding on the stage. He sent the crowd into a frenzy when he plucked a fan from the audience and serenaded her with "One Less Lonely Girl." Following the performance, Bieber debuted a 45-minute dance video featuring several of his new tunes – but not much Biebs.
"Keep being the best versions of yourselves," Bieber told the crowd as he left the stage. "I'm gonna try to do the same."
The tickets for "An Evening with Justin Bieber" were US$18 or $22 with a copy of "Purpose." Bieber devotee Samantha Kwan said the price of admission was worth it.
"I mean, it was only five songs, but I got to see him in person for $18, and he's totally hot," she said. "I wish I could come back for the other shows."
Bieber posted on Twitter after the first scheduled event that the other engagements, as well as a live stream, would go on as planned following the shootings and explosions in Paris.