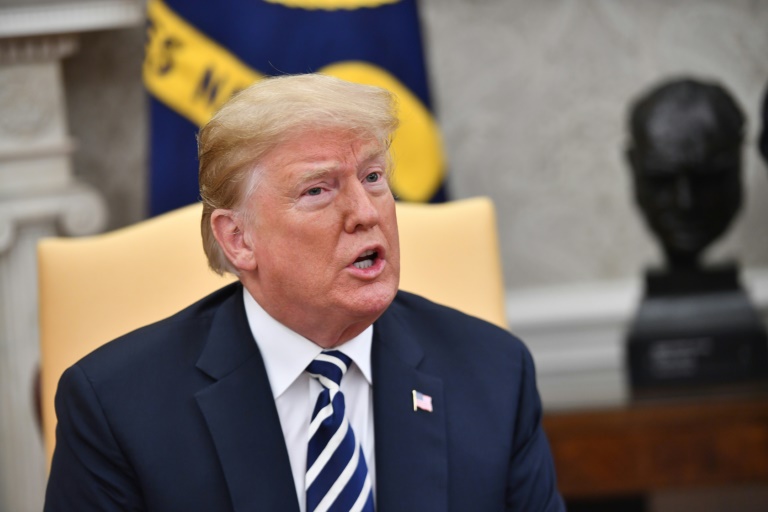 President Donald Trump doubled down Tuesday on backing his Supreme Court pick Brett Kavanaugh, as his accuser demanded an FBI probe into her allegations of sexual assault before testifying.

“A full investigation by law enforcement officials will ensure that the crucial facts and witnesses in this matter are assessed in a non-partisan manner, and that the committee is fully informed before conducting any hearing or making any decisions,” lawyers for Christine Blasey Ford said in a letter to the Senate Judiciary Committee.

The Republican-dominated panel had invited both Kavanaugh, 53, and Ford, 51, to testify publicly about her claims he pinned her down while he was drunk when they were teenagers.

Although Ford’s letter does not indicate whether she would attend the hearing without a probe by the Federal Bureau of Investigation, it said that she has faced “vicious harassment and even death threats” since going public with her allegations on Sunday.

“As a result of these kind of threats, her family was forced to relocate out of their home. Her email has been hacked, and she has been impersonated online,” it added.

Democrats were quick to back her call for a delay.

“I agree with her 100 percent that the rushed process to hold a hearing on Monday has been unfair and is reminiscent of the treatment of Anita Hill,” said Senator Dianne Feinstein.

She was referring to the woman who testified in 1991 against Justice Clarence Thomas when he was a nominee over workplace sexual harassment claims. Thomas ultimately won confirmation after Republicans ruthlessly smeared Hill’s character.

“A proper investigation must be completed, witnesses interviewed, evidence reviewed and all sides spoken to. Only then should the chairman set a hearing date,” said Feinstein.

Senator Chuck Schumer said Ford “deserves to be treated with respect and fairness by the Senate.”

Trump, who has shrugged off allegations about his own sexual improprieties, told a White House press conference that Kavanaugh has an “impeccable history in every way” and “has gone beautifully up the ladder.”

Although he repeated his full support for the planned hearings over the claims, the president also rejected calls for an FBI probe and blamed the uproar on Democratic shenanigans to cast doubt over his pick to replace retired justice Anthony Kennedy.

“I don’t think the FBI should be involved because they don’t want to be involved,” Trump told reporters.

“I feel so badly for him. This is not a man who deserves this,” the president said, calling Democratic opponents who raised the issue at the last minute “lousy politicians” but “very good at obstructing.”

Trump’s vote of confidence in Kavanaugh reinforces what is rapidly becoming the latest battlefront in the deeply polarized country ahead of November midterm congressional elections.

Kavanaugh, whose confirmation would tilt the Supreme Court to the right for years to come, had appeared set to sail through Senate confirmation for the vacancy on the nation’s top court until Ford, a California professor, went public.

A man Ford placed at the site of the assault as a witness, Mark Judge, categorically refused to testify.

“I have no memory of this alleged incident… More to the point, I never saw Brett act in the manner Dr Ford describes,” Judge said in a letter to the committee sent by his lawyers.

“I have no more information to offer the committee and I do not wish to speak publicly regarding the incidents described in Dr Ford’s letter.”

Pressure is also building from supporters of the year-old #MeToo movement, which has brought down a string of powerful male figures after women went public with accusations of sexual harassment and assault.

“Anybody who comes forward at this point to be prepared to testify in the US Senate against someone who’s being nominated to one of the most powerful positions in the US government, that takes an extraordinary amount of courage,” said Democrat Kamala Harris, a member of the panel weighing Kavanaugh’s nomination.

“The American public deserves to know the character of someone who will serve for his entire life on the highest court in our country.”

The charge against Kavanaugh has left Trump and his Republicans in the precarious position of having to reject Ford’s accusation without alienating women voters ahead of the midterm polls in which the Republicans could lose control of Congress.

Republicans are treading carefully, eager to avoid a repeat of the Thomas-Hill debacle. Their strategy appears to be centered on keeping the hearing to a limited “he said-she said” standoff that might embarrass, but not sink the nominee.

Republican supporters have also mustered letters from dozens of women declaring support for Kavanaugh throughout his career.