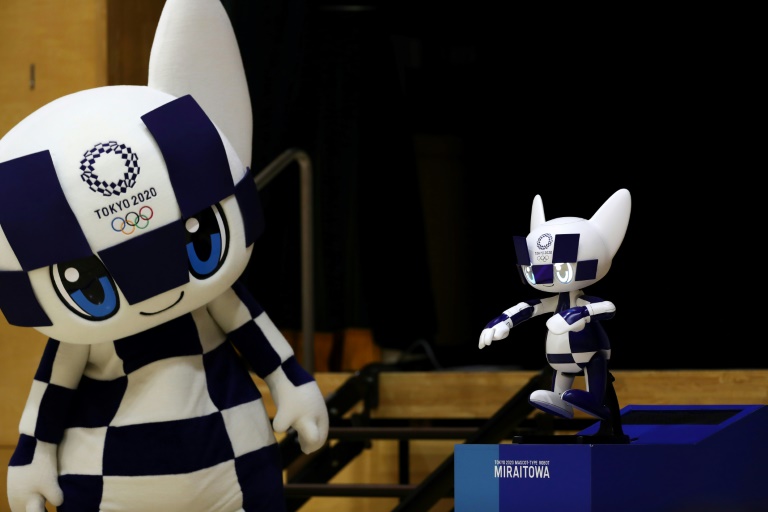 The event at a local elementary school was billed as a chance to showcase some of the technology Japan hopes will wow visitors at the Tokyo 2020 Games.

Some 600 pupils clapped and shouted “kawaii (cute)!” as the toddler-sized versions of the Tokyo 2020 Olympic and Paralympic mascots were unveiled.

The futuristic-looking pair, Miraitowa and Someity, can show “feelings” in their gleaming eyes by displaying hearts or stars.

School principal Jun Ninomiya told children the “robots will play active roles behind the scenes” at the summer games.

“Have fun and find out what functions they have and what they can do,” he told the children at Hoyonomori Elementary School in Tokyo.

Blue-and-white Miraitowa is the mascot for the Olympics and pink-and-white Someity is for the Paralympics.

With huge eyes and pointy ears, the mascot robots have multiple joints and arms which can be remotely controlled.

The pint-sized pair can’t talk but cameras inside their heads enable them to recognize expressions on the face of the person standing in front of them and respond.

They can also mirror each other’s moves, meaning one at a public viewing place could pass moves onto the other one at an actual Olympics venue, helping spectators feel like they were cheering at the venue, organizers say.

The robots, developed in collaboration with auto giant Toyota, are part of a push by Japan to put its tech sector back on the map after years in which the country’s reputation as an industry leader has flagged.

Image: AFP / Behrouz MEHRI The pint-sized versions of Tokyo’s Olympic and Paralympic mascots are meant to wow visitors for the 2020 Games