The rain was so torrential along Interstate 45 coming out of Galveston as Hurricane Harvey settled over southeast Texas that motorists had to stop under bridges to avoid driving in whiteout conditions.

The downpour on Saturday has also caused minor street flooding along a highway in Dickinson, about 25 miles northwest of Galveston.

Harvey, the fiercest hurricane to hit the U.S. in more than a decade, made landfall Friday night about 30 miles (48 kilometers) northeast of Corpus Christi as a Category 4 storm with 130 mph (209 kph) winds.

It gradually weakened over the next several hours and the National Hurricane Center said that by 5 a.m. Saturday Harvey was downgraded to a Category 1.

Rockport Mayor Charles “C.J.” Wax told The Weather Channel on Saturday that some homes and businesses were heavily damaged or even completely destroyed. Schools were also damaged.

He says emergency response system for the city of about 10,000 people has been hampered by the loss of cellphone service and other forms of communication.

Harvey made landfall Friday evening as a Category 4 hurricane but has since been downgraded to a Category 1. The National Hurricane Center says the threat in coming days is sustained rains that could unleash “catastrophic” flooding.

The city of Victoria, about 60 miles (96 kilometers) north of Rockport, had received more than 16 inches of rain by Saturday morning. 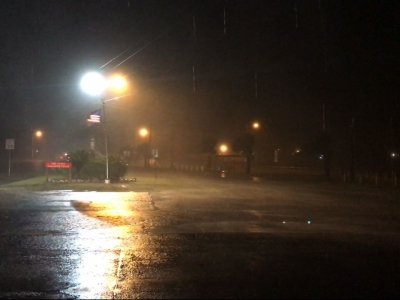 Hurricane Harvey roared ashore overnight battering coastline and communities all along the Texas Gulf Coast. One area hardest hit is the commuity of Palacios where the fury of the storm was impressive. (August 28)

Daybreak has revealed some of the damage caused when Hurricane Harvey came ashore overnight, including downed lamp posts and tree limbs in Corpus Christi and roof tiles torn off buildings.

Harvey came ashore along Texas’ Gulf Coast on Friday night as the most powerful hurricane to hit the U.S. in more than a decade. It has since been downgraded from a Category 4 to a Category 1 hurricane, but the storm is expected to hover in the region for days and to dump as much as 40 inches (1 meter) of rain in places.

Corpus Christi’s marina has been left nearly unscathed, save an awning ripped from a restaurant entrance and a wooden garbage bin uprooted and thrown.

An old white sport fishing boat was partially submerged and several boats’ sails came unfurled and were ripped and whipping in wind gusts of more than 50 mph.

President Donald Trump has commended the head of the Federal Emergency Management Agency for his handling of the hurricane now hitting the Texas Gulf Coast.

In a tweet Saturday morning addressed to FEMA head Brock Long, Trump said: “You are doing a great job – the world is watching! Be safe.”

Hurricane Harvey, the fiercest to hit the US in more than a decade, is posing the first major emergency management test of Trump’s administration.

In a separate tweet, Trump said he is monitoring the hurricane closely from Camp David and “We are leaving nothing to chance. City, State and Federal Govs. working great together!”

He also tweeted that “We have fantastic people on the ground, got there long before #Harvey. So far, so good!”

Harvey has been further downgraded to a Category 1 hurricane as it churns slowly inland from the Texas Gulf Coast, already depositing more than 9 inches of rain in South Texas.

Harvey made landfall about 10 p.m. Friday east-northeast of Corpus Christi as a Category 4, with winds in excess of 130 mph (210 kph).

But wind speeds quickly weakened and by early Saturday Harvey was downgraded. It continues to produce gusts of up to 120 mph (193 kph) and sustained winds of 90 mph (144 kph). The National Hurricane Center warns of “catastrophic flooding” over the next few days.

The storm made landfall Friday night as a Category 4 with 130 mph (209 kph) winds. It gradually weakened over the next several hours and by early Saturday, the National Hurricane Center said it back to a Category 2, still sustaining winds of 110 mph (185 kph) as of 3 a.m.

Early damage reports from Gulf Coast cities included collapsed roofs and walls. One community transported multiple people from a senior living home to the county jail for treatment after a roof caved in.

But officials remained largely unable to assess the damage before daylight.

The storm is expected to slow further and flood the area with rain through the middle of next week. The center warned that Harvey could produce life-threatening storm surges along a coastal area of more than 400 miles (643 kilometers).