BEIRUT (AP) — Lebanon’s new Cabinet won a vote of confidence from Parliament on Tuesday, paving the way for it to try and tackle the country’s crippling economic and financial crisis, despite a day of protests and riots that left nearly 400 people injured.

Prime Minister Hassan Diab’s Cabinet, which is supported by Hezbollah and its allies, won votes from the majority of parliament members present in the 128-member legislature. At the end of the day, Parliament Speaker Nabih Berri said 63 legislators voted in favor, 20 did not give a vote of confidence and one abstained.

Speaking ahead of the vote, Diab said he fully realized the massive task ahead but was confident it was still possible to rescue Lebanon’s economy from complete collapse — and that his government would get to work immediately.

“The ball of fire is spiraling quickly and if the flame is not controlled by this government then it will burn everyone,” Diab said. “We will do all we can to put Lebanon on track of reforms.”

Earlier in the day, Lebanese security forces fired tear gas to disperse thousands of protesters near the parliament building in Beirut, where the new Cabinet presented a policy statement on reforms.

Protesters threw stones at security forces and tried to block the lawmakers’ path, delaying the start of the meeting. A group of rioters later set fire to a bank in the downtown area. Nearly 400 people, including a legislator and a journalist, were injured in the riots, some of whom were rushed to a hospital for treatment.

“No confidence,” chanted some of the protesters.

Lebanon has been gripped by anti-government protests since October. Demonstrators are calling for sweeping reforms and an end to a political class they deem as corrupt and incompetent, blaming it for the rapidly worsening financial crisis. The protests forced the resignation in October of the former prime minister, Saad Hariri.

Diab, a former professor at the American University of Beirut, was picked by the militant group Hezbollah and its allies after negotiations to bring back Hariri, who was insisting on a government of technocrats, failed.

That will make it difficult for him to gain the international community’s trust and unlock badly needed assistance for the country. Friendly nations, including France, have made clear they will not support the heavily indebted nation before a reform-minded Cabinet is formed.

Diab urged the international community, and local opponents, to give his government a chance.

“Lebanon is passing through a very difficult and unprecedented time. Overcoming this period peacefully is close to impossible without assistance from abroad, as well as from the inside,” he said.

Earlier in the day, a group of protesters surrounded the car of one Cabinet minister, Demianos Kattar, as he was on his way to the nearby government headquarters, pelting it with eggs and pounding it with their fists before soldiers and police pushed them away.

The protesters also attacked legislator Salim Saadeh in his car. “Thank God I am good. I thank everyone for their love,” Saadeh said in a video posted on his Twitter account, his shirt tainted with blood and his left eye blue and swollen.

“Does the protest movement approve of the attack on colleague Salim Saadeh?” parliament speaker Berri said during the parliament session.

Saadeh later went to parliament with a bandaged head and gave a speech in which he criticized widespread corruption in the country.

Protesters also attacked a cameraman working for the local OTV TV station run by loyalists to President Michel Aoun. Since the protests began nearly four months ago, journalists have been attacked by both government supporters as well as opponents.

Security forces fired tear gas in several streets leading to parliament, where protesters tried to remove parts of a giant concrete wall. In other streets, troops forced protesters from the middle of the road to allow for traffic to pass.

The protesters later smashed the front of a Beirut hotel close to parliament causing significant damage.

Near one of the entrances to parliament government supporters attacked some protesters to force them to open the way. Security forces separated the two sides. The Lebanese Red Cross said 45 injured people were taken to hospitals, while 328 others were treated on the spot.

The parliament session began with Diab reading the 16-page government statement on a rescue plan to get Lebanon out of its economic and financial crisis, the worst since the end of the 1975-90 civil war.

The plan includes reforms in the judicial, financial and administrative fields, as well as plans fighting corruption and fixing the country’s finances.

Lebanon has one of the highest debt ratios in the world, standing at more than 150% of GDP and worsening over recent years with no economic growth and high unemployment.

In the statement read by Diab, the prime minister said “painful” measures are needed. He asked that his government be given a chance, noting it would be difficult to extricate Lebanon from the crisis once “we reach total collapse.” He said slashing interest rates were among measures that needed to be taken in order to revive the economy and reduce the debt.

“Those who think they can survive the collapse of the economy are mistaken,” Diab said.

Image: Protesters remove a concrete block from a wall that was installed by authorities to open a road that links to the parliament building during a protest against a parliamentary vote in downtown Beirut, Lebanon, Tuesday, Feb. 11, 2020. (AP Photo/Bilal Hussein) 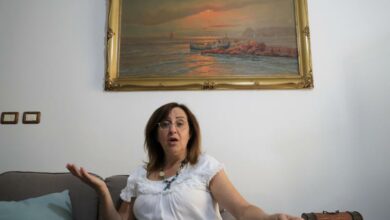 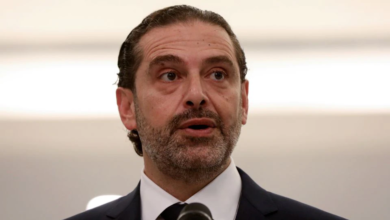