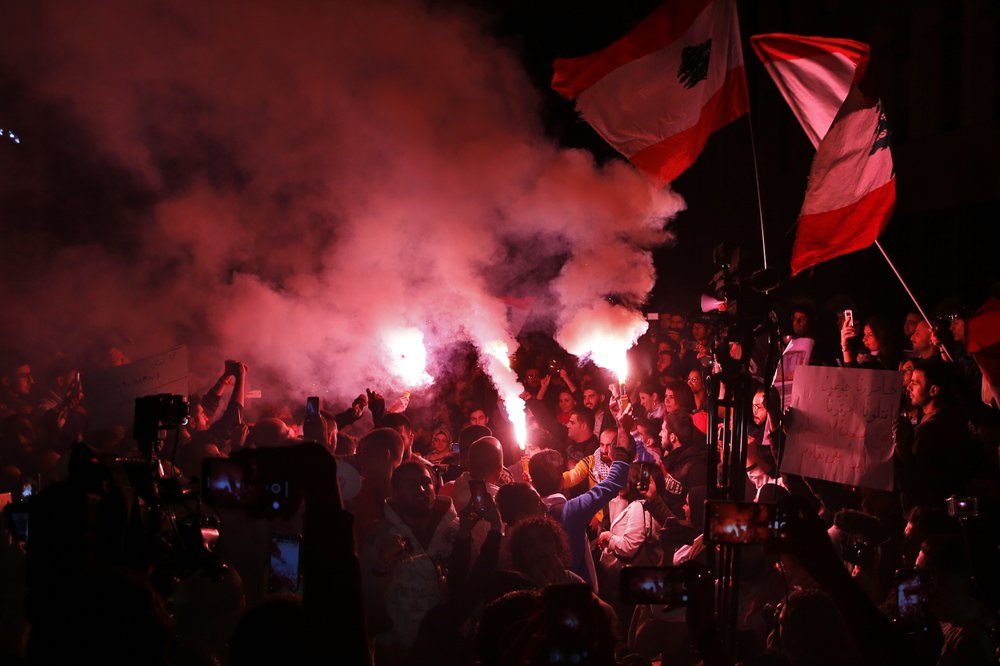 BEIRUT (AP) — Lebanon paid back a Eurobond worth $1.5 billion that was scheduled to mature Thursday, a Finance Ministry official said, pacifying concerns of a first-ever default on its debt amid the worst financial crisis in three decades.

The tiny Mediterranean country’s economic emergency has ignited nationwide protests against widespread corruption and mismanagement, bringing the country to a standstill for over a month. The protests were initially sparked by new taxes but have snowballed into calls for the entire political elite to step aside.

Prime Minister Saad Hariri resigned in late October, meeting a key demand of the protesters. But that has plunged the country into further uncertainty, with no clear path to resolving its economic and political problems.

The Eurobond announcement came as a top Arab League official arrived in Lebanon, expressing readiness to help the country solve its political stalemate.

The repayment was being widely watched in Lebanon, which has one of the highest debt ratios in the world, standing at $86 billion or 150% of the GDP. There were concerns that Lebanon, which always paid back its debt on time, might default. Lebanon has in recent weeks imposed unprecedented capital controls.

The Finance Ministry official, who spoke on condition of anonymity in line with regulations, gave no further details about the repayment. Local media and analysts said the payment was made from the reserves of the Central Bank.

“This is a positive message to international ratings agencies and lenders that Lebanon did not default in the past and will not default in 2020,” said economist Ghazi Wazni. He added that Eurobonds worth $2.5 billion are scheduled to mature next year, the first payments will come in March and it will be worth $1.3 billion.

The agency said the outlook for Lebanon was negative and “reflects the risk to the sovereign’s creditworthiness from rising financial and monetary pressures tied to widespread protests and the resignation of the government.”

The office of Lebanon’s president, Michel Aoun, said he discussed political and economic conditions with visiting Arab League assistant secretary general, Hossam Zaki. Aoun has not set a date for binding consultations with heads of parliamentary blocs to name a new premier. Hariri, who was Aoun’s and the militant group Hezbollah’s favorite to lead a new Cabinet, withdrew his candidacy on Tuesday.

Politicians have failed to agree on the shape and form of a new government. Hariri had insisted on heading a government of technocrats, while his opponents, including Hezbollah, want a Cabinet made up of both experts and politicians.

Meanwhile, the protesters are demanding that the country’s ruling elite be replaced, blaming them for failures in years that followed the 1975-90 civil war. The protests have remained overwhelmingly peaceful, resorting to road closures and other tactics in an effort to pressure politicians into responding to their demands.

But in recent days, scuffles broke out in Beirut and other areas between protesters and Aoun and Hezbollah supporters, leaving dozens of people injured. As tempers flare, there are real concerns Lebanon could be sliding toward a prolonged period of instability.

“The current situation cannot take conditions and counter-conditions. We should all work together to get out of the crisis in what serves the interest of the Lebanese people,” Aoun said in comments released by his office Thursday. He added that Arab support “should be translated into actual steps regarding assistance to improve the deteriorating economic conditions.”

Zaki told reporters said there must be solution for the Cabinet formation crisis, adding that “it is important so that Lebanon avoids negative effects on its economic conditions and civil peace.”

Scores of Lebanese businesses have closed in recent months and thousands of employees were either laid off or are getting half their salaries amid the crisis. Local banks have imposed capital controls worsening the economic conditions amid a liquidity crisis and shortage in U.S. dollars.

Since 1997, the Central Bank has kept the pound stable at 1,507 to the dollar thanks to heavy borrowing at high interest rates but on the black market, the price of the dollar reached in recent days 2,100 pounds, a 40 percent over the official price.

The private sector had planned a strike Thursday but later suspended it while gas stations started an open-ended strike protesting dollar shortages to cover their imports. Exchange shops will also hold a one-day strike on Saturday to protest charges by some that accuse them of being behind the rise oof the dollar against the local currency.

Late on Thursday, scores of protesters held a sit-in outside the Central Bank in Beirut blaming bank governor Riad Salameh’s policies for worsening economic and financial conditions in the country.

Image: Protesters hold flares and Lebanese flags during ongoing protests against the Lebanese government in front of the Central Bank, in Beirut, Lebanon, on Thursday, Nov. 28 (AP Photo/Bilal Hussein)