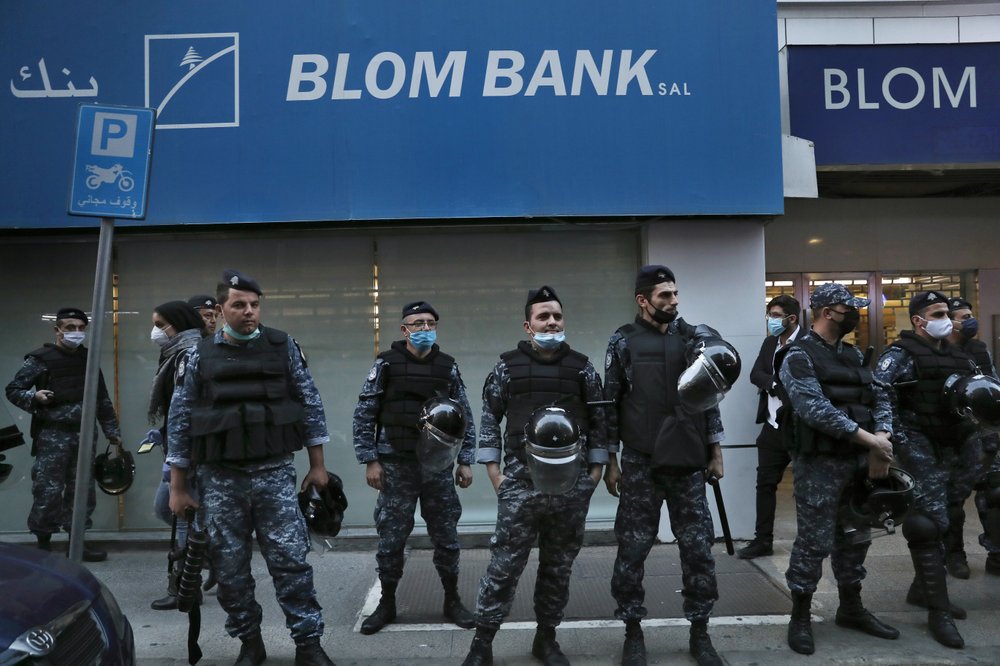 BEIRUT (AP) — Lebanon’s prime minister said Friday he is holding the country’s Central Bank governor responsible for the downward spiral of the national currency, accusing him of pursuing “opaque” policies that sent the pound crashing against the dollar.

The government has agreed with Lebanon’s president to hire an independent international auditing company to review the Central Bank’s performance, Prime Minister Hassan Diab said. The move, and the premier’s speech, were an indication of a widening rift with the country’s longtime chief financial decision-maker, Gov. Riad Salameh.

Diab urged Salameh to speak openly to the public about the financial crisis, hinting that the governor has intentionally engineered the crash of the pound.

The Lebanese pound has been on a downward trajectory for weeks amid a worsening liquidity crunch and an economic slump. But it appeared to be in a free fall over the last few days, selling as low as 3,800 pounds to the dollar, down from a fixed peg of 1,500 pounds to the dollar in place for 30 years.

“The Central Bank is either incapable, absent or directly inciting this dramatic depreciation,” Diab said in a televised speech.

The Central Bank’s decision earlier this week requires local banks to convert cash withdrawals from foreign currency accounts to the pound, at a market rate determined daily by the banks. It also applies for money transfers, which was first implemented Friday, when Lebanese media said the rate was 3,625 pounds to the dollar.

The decision sucked dollars out of the market, driving up the black market price, as well as panic among depositors. Protesters took to the streets on Thursday to denounce the governor’s decision in rallies that had all but disappeared since movement restrictions were put in place because of the spread of the coronavirus.

Experts say the Central Bank’s decision is likely to swamp the market with the Lebanese pound and appeared designed to replenish the local banks’ foreign currency reserves and reduce the gaps in their balance sheets.

Salameh, governor since 1993, was a key player in Lebanon’s post-war economy. For the past few years, he has been criticized by the powerful militant Hezbollah group for his implementation of U.S. sanctions against the Iran-backed group.

The Lebanese, who have relied on a stable national currency that was pegged to the dollar since the end of the 1975-1990 civil war, are facing the worst economic and financial crisis in decades. The tiny Mediterranean country of about five million people is one the most indebted in the world. Nationwide protests broke out in October against the government because of widespread corruption and mismanagement of resources.

Diab’s government came to office in January and was quickly engulfed in a nationwide health crisis over the novel coronavirus, a crisis that deepened the country’s economic recession.

Diab also accused Salameh of being uncooperative, suggesting the governor is keeping his finances secret, including bank losses estimated to be as high as $3 billion in the last month alone. According to Diab, the numbers show that $5.7 billion in deposits have left the banks between January and February, adding to the liquidity crunch — something he described as a financial “black hole.”

“The public is paying the price for this policy,” Diab said.

Lebanon has a large diaspora that sends foreign currency home — an income that was already dwindling since last year — and relies on transfers from here to Lebanese students studying abroad. Also, many Lebanese keep their savings in foreign currency.

Image: Lebanese riot police stand guard in front of a bank entrance, after the anti-government protesters try to destroy banks windows during a protest against the Lebanese central bank’s governor Riad Salameh and against the deepening financial crisis, at Hamra trade street, in Beirut, Lebanon, Thursday, April 23, 2020. (AP Photo/Hussein Malla)