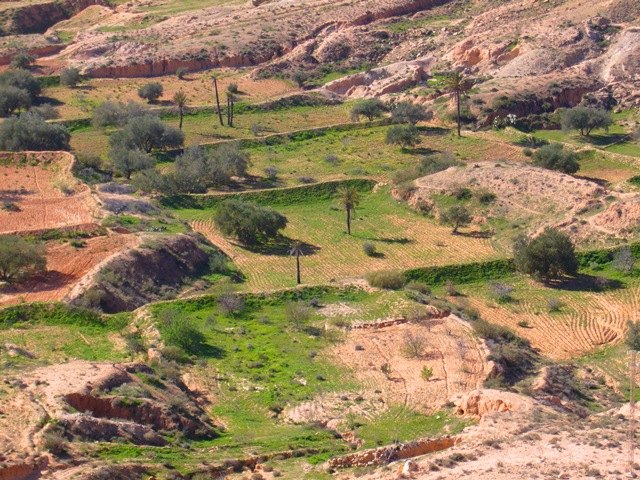 Habib Ayeb is a Tunisian geographer and professor at the American University in Cairo’s Social Research Center. His domain of research includes social-geography, governance, poverty, marginality, hydro-politics and geopolitics. He shares his work between Tunisia and Egypt, where he has spent 15 years of his life, studying Egyptian farmers and water issues.

He recently co-directed the documentary “Green Mirages” with Nadia Kamel, the Egyptian filmmaker who directed “Salata Baladi.” “Green mirages,” which will be screened tonight at the AUC downtown campus, concentrates on Ayeb’s birthplace, the village of Demmer in southeast Tunisia.

Marginalized from development projects, this village offers a reflection on crucial developmental limitations and puts the mere concept of development in the balance. According to Ayeb, the ideology of development is an unavoidable rollercoaster that reshapes societies at large, including some areas and excluding others, forever. In this interview, he reflects on development and its consequences, and on its impact on the small rural community of Demmer.

Egypt Independent: As an academic who wrote profusely about water politics and the concept of rural marginalization, could you explain why you decided to incorporate the film medium to tackle these topics?

Habib Ayeb: I don’t have a very solid cinematographic knowledge, but I rapidly understood that what passes through the lens of a camera suddenly gains much more impact — an impact that an academic paper, read by a bunch of other academics in closed circles, would never trigger.

So I am doing both. As an academic I keep on publishing papers, and I also work on documentaries, through which I accomplish my duty as a citizen. The debate on water, for instance, needs to break free of the purely academic debates to stir the consciences of a much wider public.

The documentary “On the banks of the Nile: Shared waters” that Olivier Archambeau — also a geographer and a professor at the University of Paris VIII — and I released in 2003 traveled the world, from India, the US, Holland and many other destinations. It spurred a number of healthy society debates on water gratuity whenever it was screened, a reaction that an academic paper cannot trigger.

I defend free access to water for basic needs, to be clean, drink and eat … enough to avoid social exclusion. We need to stop discussing water issues in terms of available volume and geographical distribution to tackle the problem at large, which tackles environmental, social and political problems.

In the meantime, I met the filmmaker Nadia Kamel — the director of Salata Baladi — and this film moved me so deeply that I asked her to do a film with me. It was the same degree of intimacy as if I had asked her to have a child together. Because all our discussions inevitably revolved around the existing links between environmental and social concerns, I told her that I knew a place where these questions intermingled, a place where development has provoked resistances on the ground. I told her about the village where I was born, Demmer.

HA: Demmer is a troglodyte village in a mountain located in southeastern Tunisia. When I was a kid, we were living in poverty, but the village was active and whenever rainfalls came, the villagers sowed seeds. The earth was Aeolian silt, deposited on top of the mountain by wind in the middle of a desert. The locals had a system of little barrages to divert the flow of rain water that tumbles from the mountain so it would infiltrate the soil. The water stagnated and fed the olive and fig trees. It was never a market agriculture, it was a small-scale agriculture for local consumption. It was enough to enable one generation after another to live on this mountain.

Just like in Fayoum, the know-how of the locals to grow food was amazing. No engineer is capable today of managing water to the minute like these peasants. A rock on the ground delimitated the size of a field, and no one would ever dare to move the rock, which defined land property better than any contract would.

EI: What has modified the rural landscape of Demmer in the past 50 years?

HA: The models of development. A school was built nearby, and all the hardworking families sent their kids to the Coranic School, confident that it would guarantee them a better future. Unfortunately this was not a school that offered equal opportunities, and most kids did not pursue their education after the baccalaureate.

So most of them are now unemployed and have never learned how to plant and harvest crops.

This region has been marginalized from development policies, abandoned, and the illusion of modernity and comfort that could be seen in other cities nearby reinforced this feeling of aloofness. Misery and poverty accumulated in Demmer because it was not integrated in the development schemes.

Worldwide, this fake development results in human desertion of certain areas that have been excluded, and poverty becomes rampant. In my case, I know that today I could not live among my people. I don’t know how to share lands, how to prune an olive tree, how to dig a house in the mountain, how to grow barley. … But at least I made a career. Most people my age who went to the same school and stayed do not possess this knowledge either anymore. There is a very small minority of us who managed to pass through the “glass ceiling” and climb up the social ladder. Development happened in my village with the generalization of school access right after the independence. This model of development is a model of exclusion.

EI: How did the shooting of the documentary go?

HA: Nadia took out her camera as soon as we landed in Tunis, and kept it running during the whole time we were there. There are only three characters in the movie, me included. The idea was to produce an interesting film with a very sharp vision without falling in the trap of aesthetics. This screening of the movie never failed to spur the same questions from the audience, where the main concern is: Should we embrace development or live in the dark?

EI: So, should we live in the dark?

HA: I think this is a fake issue, a blocking debate. We cannot protect ourselves against development. And not all of it is bad — we have medicine, technological progress … I don’t want to show any conservatism or obscurantism, and even less fall in some kind of heritage terrorism. But the problem is the way development is imposed on people, individually and collectively, and that we are not given the choice of what we receive. Be it nuclear energy, cars, bicycles, the number of kids we can have … because we don’t all have equal access, some of us are inevitably left on the side of the road while the development machine is on the move. What is worse is that the people who are excluded and too poor to jump on the bandwagon of development will be also dispossessed of what previously used to be theirs: their knowledge, knowhow, intellectual property. … Ultimately they are scraped of their human dignity.

EI: You have been studying Egypt’s rurality for over a decade: Which model of agriculture would benefit the Egyptian people at large?

The film “Green Mirages” will be screened today, Wednesday, at AUC Tahrir Campus — Falaki Building, Room 208 (access through Mohamed Mahmoud Street) at 6 pm. The directors Nadia Kamel and Habib Ayeb will attend the screening of the 36-minutes documentary, which will be followed by a discussion led by Mohamed Nagi, the director of Habi Centre for Environmental Rights.