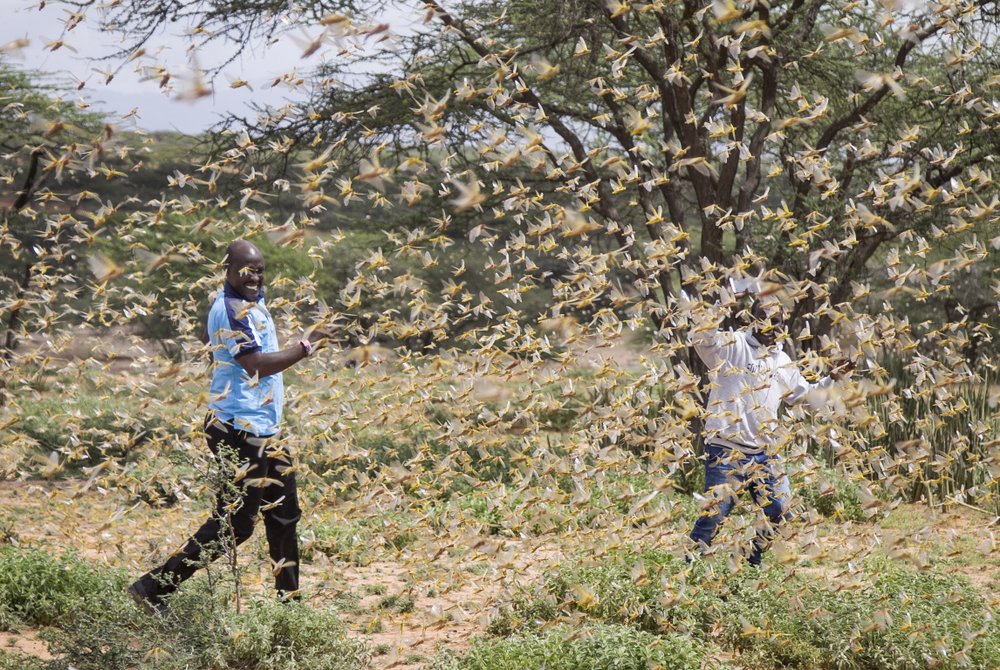 ADDIS ABABA, Ethiopia (AP) — The most serious outbreak of locusts in 25 years is spreading across East Africa and posing an unprecedented threat to food security in some of the world’s most vulnerable countries, authorities say. Unusual climate conditions are partly to blame.

The locust swarms hang like shimmering dark clouds on the horizon in some places. Roughly the length of a finger, the insects fly together by the millions and are devouring crops and forcing people in some areas to bodily wade through them. Near the Kenyan town of Isiolo on Thursday, one young camel herder swung a stick at them, with little effect. Others tried to shout them away.

An “extremely dangerous increase” in locust swarm activity has been reported in Kenya, the East African regional body reported this week. One swarm measured 60 kilometers (37 miles) long by 40 kilometers (25 miles) wide in the country’s northeast, the Intergovernmental Authority on Development said in a statement.

“A typical desert locust swarm can contain up to 150 million locusts per square kilometer,” it said. “Swarms migrate with the wind and can cover 100 to 150 kilometers in a day. An average swarm can destroy as much food crops in a day as is sufficient to feed 2,500 people.”

The outbreak of desert locusts, considered the most dangerous locust species, also has affected parts of Somalia, Ethiopia, Sudan, Djibouti and Eritrea and IGAD warns that parts of South Sudan and Uganda could be next.

The outbreak is making the region’s bad food security situation worse, the United Nations’ Food and Agriculture Organization has warned. Hundreds of thousands of acres of crops have been destroyed.

Already millions of people cope with the constant risk of drought or flooding, as well as deadly unrest in Ethiopia, extremist attacks in Somalia and lingering fighting in South Sudan as it emerges from civil war.

The further increase in locust swarms could last until June as favorable breeding conditions continue, IGAD said, helped along by unusually heavy flooding in parts of the region in recent weeks.

Major locust outbreaks can be devastating. A major one between 2003 and 2005 cost more than $500 million to control across 20 countries in northern Africa, the FAO has said, with more than $2.5 billion in harvest losses.

But one approach backfired in Kenya in recent days when the agriculture minister asked people to post photos on social media of suspected locusts, or “nzige” in Swahili.

A mocking series of images of warthogs, cats, lizards and other beasts followed, with pleas for help in identifying them, and the appeal was ended.

Image: In this photo taken Thursday, Jan. 16, 2020, two Samburu men who work for a county disaster team identifying the location of the locusts, are surrounded by a swarm of desert locusts filling the air, near the village of Sissia, in Samburu county, Kenya (AP Photo/Patrick Ngugi)