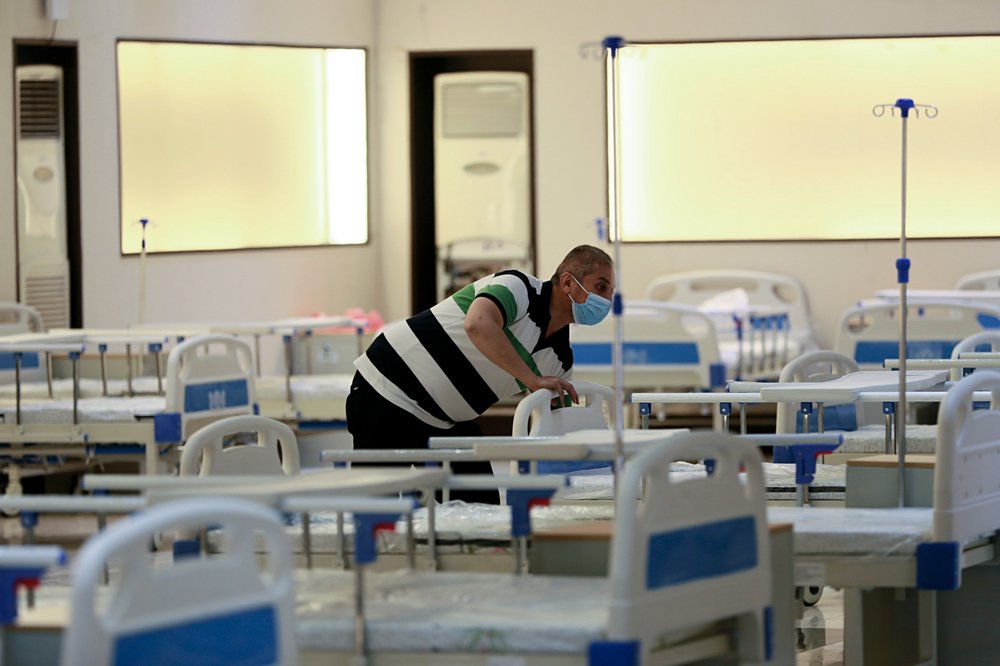 BAGHDAD (AP) — In Baghdad’s vast exhibition grounds, masked workers lugged hospital beds into rows for makeshift coronavirus wards, as doctors and officials sounded the alarm Sunday over a surge in virus cases in the capital.

The long-dreaded scenario is gripping the country amid a severe economic crisis brought on by plummeting oil prices. But with a widening budget deficit, doctors are running low on medical equipment, including key protective gear. A cap on new hires is also expected to strain the already over-stretched system.

As hospitals overflowed with patients, the Iraqi government announced temporary field hospitals will open throughout Baghdad, where infections are highest, to cope with the exponentially rising number of virus patients. Iraq’s health system was already battered by years of conflict as well as poor infrastructure and lack of funds.

Work to erect the field hospital in the fair grounds began Saturday, and it will eventually provide beds for 400 men and 100 women. When the supply of hospital cots ran out, workers brought in metal-framed single beds.

“God willing, there will be future plans to increase the number of beds and field hospitals,” said Mouhamed Bander, an engineer with the Al-Aqiq institution for charity. His organization set up the wards in tandem with the ministries of health and trade.

Virus cases began rising after the Muslim holy month of Ramadan, when families and friends typically get together to break the daylong fast. In less than a month, infections spiked seven-fold to over 30,868 as of Sunday, up from less than 4,000 at the end of May. Deaths also spiked, with over 1,100 killed among the confirmed cases, according to Health Ministry figures.

Among the recent dead was legendary Iraqi soccer star Ahmed Radhi, 56, who died Sunday due to virus complications after fighting for over a week. He was beloved for scoring his country’s first and only World Cup goal in 1986, and was also a political figure.

Iraq qualified for the World Cup just once, and Radhi’s goal is a source of pride for Iraqis, many of whom mourned his death on social media.

The troubling increase in cases was due to more testing, but also a lack of public adherence to government measures, said Health Ministry spokesman Saif al-Badr. Testing increased from nearly 4,000 a day last month to over 13,000 in recent days. By next week, he said 20,000 samples will be examined daily.

Despite the additional field hospitals in place, doctors on the front lines fear these measures won’t be enough to absorb the rising number of infections.

Doctors said the Health Ministry relies heavily on rapid blood tests to identify the first signs of infection. If these are positive, swabs are taken to confirm whether it’s coronavirus using specialized testing kits. But blood tests are known to produce false positives.

“Its overcrowding hospitals,” said a doctor in Baghdad. “It’s chaos.”

The Iraqi health care workers and health officials all spoke on condition of anonymity because of recent measures by the ministry prohibiting them from talking to reporters.

The manager of a hospital in the southern city of Karbala, which reached capacity this week, ordered staff not to conduct tests if symptoms weren’t present because “there are no more beds to admit people,” a doctor there said. Still, many with no apparent symptoms do have the virus.

All of the health workers interviewed said they’d purchased their own protective equipment because hospital supplies were running low.

“We are in a fog, we don’t know what is going on,” said the doctor in Karbala, who said they’d asked their hospital for gloves, masks and protective suits, but were told these had run out.

“The numbers concern us,” said a doctor in a major Baghdad hospital dealing with virus patients. “And we are already overstretched.”

A senior official said the Health Ministry is in dire need of funds. But a budget hasn’t been approved by the government, which is grappling with severe shortfalls in the wake of falling oil prices. Iraq depends on crude exports to fund nearly 90 percent of state revenue. Allocations to the ministry are made on a month-to-month basis.

“We need a budget twice the size of the previous budget,” said the official.

But officials from the prime minister’s office said funds allocated to the Health Ministry also weren’t being spent efficiently.

“The problem is logistics management, the network is weak,” the official said, speaking on condition of anonymity in line with regulations. The official said multiple layers of central purchasing committees within the Health Ministry and in directorates across provinces are responsible for making purchases, instead of allowing hospitals to source materials directly.

The ministry is also unable to make new hires, which are essential to cope with the rising number of cases. Recent graduates have been asked to volunteer their services until a state budget is approved.

The move has sparked young doctors to lash out on social media.

“I graduated in 2019 and the Iraqi government has prevented me and more than 2,200 newly graduated Iraqi doctors from practicing medicine,” said Dua’a al-Jarjees.

By SAMYA KULLAB and QASSIM ABDUL-ZAHRA

Image: In this Saturday, June 20, 2020 photo, workers set up a field hospital to treat patients with COVID-19 in Baghdad, Iraq. New field hospitals have been erected to treat virus patients as hospitals reach capacity, but health workers fear the worst is still to come. (AP Photo/Hadi Mizban)