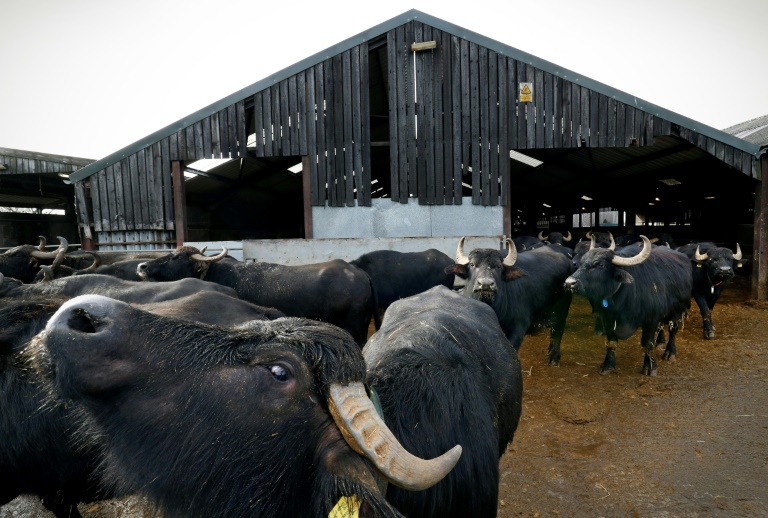 Buffalo mozzarella made from the milk of a herd roaming the green rolling hills of southern England is hoping to dethrone the Italian original in the UK thanks to Brexit.

Some 2,000 kilometers (1,200 miles) from Campania in southern Italy is Laverstoke Park Farm in Hampshire — owned by the 1979 Formula One motor racing champion Jody Scheckter.

“The difference with the Italian mozzarella is that ours is better!” the South African, 69, boasted to AFP on a tour of his farm.

Come milking time, the buffaloes leave their barn, straw still stuck to their hooves, and head to the milking sheds.

Their milk, rich in protein and calcium, is transformed into white balls of mozzarella which are then sold to customers including supermarket chain Waitrose, online delivery giant Ocado and Pret a Manger sandwich shops.

Scheckter turned to mozzarella 10 years ago with the aim of making it “better tasting, without compromise”.

The buffalo are pampered, grazing freely in pastures filled with different types of grass and clover.

In winter, they can get a massage in the barn from a giant rotating brush.

Scheckter said it took a while for the British palate to adjust to the new domestic delicacy.

“At the beginning, it was difficult because my mozzarella was fresh and most of the people in England had never tasted fresh mozzarella. They tried Italian mozzarella, which is five days old and starts to get soft,” he said.

With just weeks to go before Britain leaves the European Union on March 29 and much of the country in a state of confusion, Scheckter is optimistic.

Potential new clients have been in touch, assessing their options as no deal has yet been agreed between London and Brussels on keeping goods from the EU flowing.

“The interest is there,” said Scheckter.

Around a third of the food eaten in Britain comes from the rest of the EU and the industry fears supply chain disruptions if the UK crashes out without a deal.

Some companies are stockpiling, while others are changing to domestic suppliers.

Tim Martin, the chairman and founder of the UK pub chain Wetherspoon, has decided to stop selling champagne and other European products in favor of British equivalents.

The Azzurri restaurant group, which owns the Zizzi and ASK chains, has switched from Italian to British suppliers for the 650 tonnes of mozzarella it gets through each year.

The group’s restaurants are now supplied by Glanbia Cheese, one of the largest mozzarella producers in Europe, which exports from the UK to more than 30 countries worldwide.

The firm has two production sites, in Wales and Northern Ireland, and announced last year that it was investing 130 million euros ($147 million) in a state-of-the-art manufacturing facility in the Republic of Ireland.

It will be able to produce 45,000 tonnes of mozzarella a year.

“We did blind taste-tests and the British mozzarella came out as a winner. It had much better texture and much creamier profile,” Kathryn Turner, director of food development at Zizzi, told AFP.

“It is a really good product and not just from a taste and flavor profile… It is a more local product.

“Brexit always comes into consideration at the moment with daily changes. It wasn’t the sole reason why we did it but it was a consideration.”