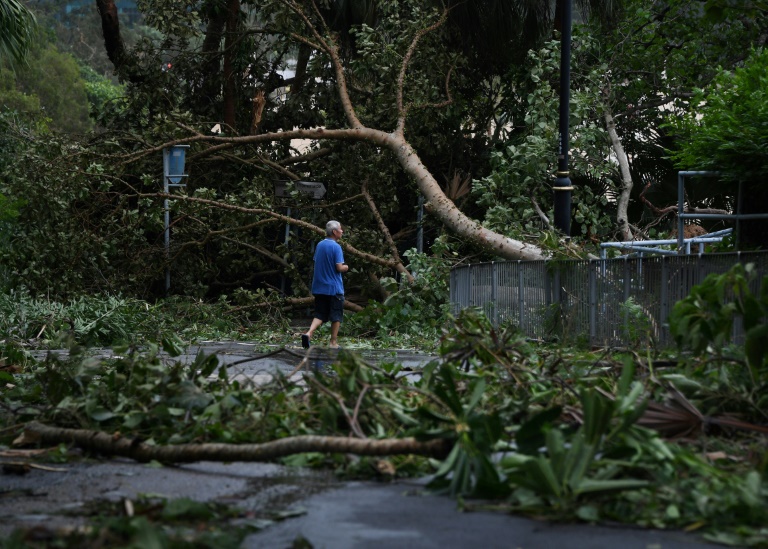 Hong Kong began a massive clean-up Monday after Typhoon Mangkhut raked the city, shredding trees and bringing damaging floods, in a trail of destruction that left dozens dead in the Philippines and millions evacuated in southern China.

The death toll in the Philippines, where the main island of Luzon was mauled with fierce winds and rain, rose to 65 overnight as rescuers pulled more bodies from a huge landslide in the mountain town of Itogon.

The landslide buried an emergency shelter which was being used by miners and their families in the town.

No-one has yet been pulled alive from the rubble and relatives of those buried are taking part in the rescue efforts, the town’s mayor Victorio Palangdan told AFP.

Farms across northern Luzon, which produces much of the nation’s rice and corn, were sitting under muddy floodwater, their crops ruined just a month before harvest.

After tearing through Luzon and pummeling Hong Kong and Macau, the storm made landfall in mainland China late Sunday, killing four in Guangdong province, including three hit by falling trees.

Authorities there said they had evacuated more than three million people and ordered tens of thousands of fishing boats back to port before the arrival of what Chinese media had dubbed the “King of Storms”.

In the high-rise city of Hong Kong, the government described the damage as “severe and extensive” with more than 300 people injured in Mangkhut, which triggered the maximum “T10” typhoon alert.

The monumental task of cleaning up the city began as residents, some in suits and ties, struggled to get back to work on roads that remained blocked by felled trees, mud and debris.

Landslides and severe flooding affected some areas, with over 1,500 residents seeking refuge in temporary shelters overnight.

The storm, with gusts of more than 230 kilometers per hour (142 mph), sent buildings swaying and waters surging into homes and shopping malls in Hong Kong, with some roads waist-deep in water.

Windows in tower blocks and skyscrapers were smashed as people cowered inside.

In the neighborhood of Heng Fa Chuen, thousands of rocks and pebbles from the sea covered parkland along the coastline which had been battered by waves.

Streets in the seaside village of Lei Yue Mun were covered in debris and glass as residents picked their way through.

The city’s main Victoria Park had become an obstacle course with hundreds of trees down and many completely uprooted.

Emergency teams were sawing apart some of the biggest trees blocking roads and pathways across the city in a clean-up operation that is likely to take days.

In the neighboring gambling enclave of Macau, all 42 casinos shut down for the first time in its history as the storm approached.

They opened again on Monday but Macau was still in recovery mode after severe flooding hit parts of the city, forcing emergency workers to rescue people from their shops and homes using boats and jetskis.

As the storm moved past the enclave Sunday, streets became submerged under water gushing in from the harbor.

On Monday morning, shopkeepers in Macau were hosing down their stores which had been left caked in mud after the flood waters receded.

People were attempting to dry out cupboards and electrical appliances on the streets as police and volunteers helped with the clear-up.

The government and casinos took extra measures ahead of the storm, determined to avoid a repeat of Typhoon Hato which battered Macau last year, killing 12 people and drawing accusations the city was ill-prepared.

In Guangdong province, trees fell and some streets had ankle-level flooding.

Residents in Yashao village moved debris and branches off the roads for collection by a rubbish truck. A large propaganda billboard was blown down on the side of the road.

“I was scared. I didn’t dare go out last night. At one point the flooding was this high,” said villager Zhen Jingli, 62, pointing to his waist.

Hong Kong shuts down as powerful typhoon sweeps past