The trip from the center of the Lithuanian capital, Vilnius, to the refugee reception center in Rudninkai takes about 40 minutes. It’s not that easy to get there. We have to stop and ask for directions several times. But eventually we park our car at the edge of a forest and then follow a well-trodden path through the undergrowth toward the camp.

Almost immediately, a security guard approaches us. “What do you want here?” he asks. After all, we — two journalists originally from the Middle East — look more like the people inside the refugee camp. Our European companion doesn’t though.

We explain that we’re journalists and we want to report about the camp. Another man comes to check our papers but tells us that it’s not possible to enter the camp without permission from the Lithuanian Interior Ministry. We wait three hours for authorization to come through from Vilnius, and then we’re finally allowed to pass through the steel fence that surrounds the camp.

Inside, there are caravans and tents, although we’re not allowed to look into these, apparently for security and health reasons. A further fence separates us from the migrants here. Most of them appear to come from the Middle East, although some are also from Africa. Their clothes look dirty, their faces tired. Almost all are male and most appear to be between 20 and 30 years old. 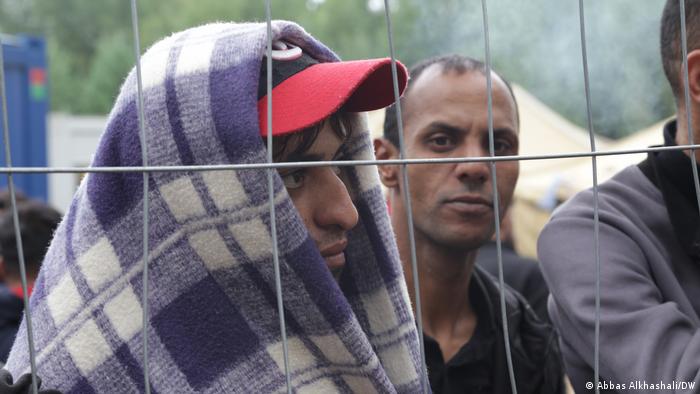 They were hoping for a better future, but are stuck inside the Rudninkai refugee camp

There, in the middle of the Lithuanian forest, there’s a conversation going on about corruption in Iraq. There are a lot of Iraqis in the camp, and some of them are complaining about the injustices back home, as well as the authoritarian behaviors of certain politicians and militia groups in Iraq. One of the men is scathing about a certain politician; another defends his actions.

Most of the young men here participated in the popular protests in Iraq in 2019, which called for an independent Iraq and an end to political corruption. Some of those demonstrations were dispersed violently, and ever since then activists have been threatened and harassed; some of the most prominent activists have been killed or kidnapped.

Ahmed, a young man from the southern Iraqi city of Karbala, has scars all over his body and only one good eye. He explains sadly that six years ago he was in Baghdad and near a car bomb explosion.

Abdullah, 21, has different problems. His body is covered in irritated skin. He has had bad eczema since he was a small child. One of the other men here is suffering from a strange muscular weakness. His brother has the same issues and is lying in his tent, unable to move.

After hearing these dreadful stories, we wonder what on Earth is going to happen to these people.

Most of the people in this camp only want one thing, and that is to be able to live in the European Union. But the EU is wary of allowing them in, and Lithuania, a small country doing duty as the European Union’s border guard, has been overwhelmed by so many asylum requests.

Lithuania’s deputy interior minister, Arnoldas Abromavicius, told DW that he is well aware of the plight of those in the camp. At the same time though, he accuses travel agencies in neighboring Belarus of deliberately enticing the Iraqis there, so that the authorities in the Belarusian capital, Minsk, can then let them cross the border into Lithuania.

Belarus is spreading “fake news,” suggesting that Minsk is a suitable way to enter into the EU, he said, and thereby putting pressure on European nations.

Lithuania is trying hard to improve the situation for the people caught up in this campaign, Abromavicius said. After a discussion with the authorities in Baghdad, Lithuania has agreed to take care of the would-be Iraqi migrants — as soon as the flights between Baghdad and Minsk have been canceled. Iraqi Airways has announced that it is pausing flights into Belarus for the rest of August.

The young men trapped in the Lithuanian camps have become political tools, observers say. Ever since the European Union began to sanction President Alexander Lukashenko for — among other things — his brutal treatment of opposition activists in Belarus, the authoritarian has tried to instrumentalize irregular migration for his own ends. 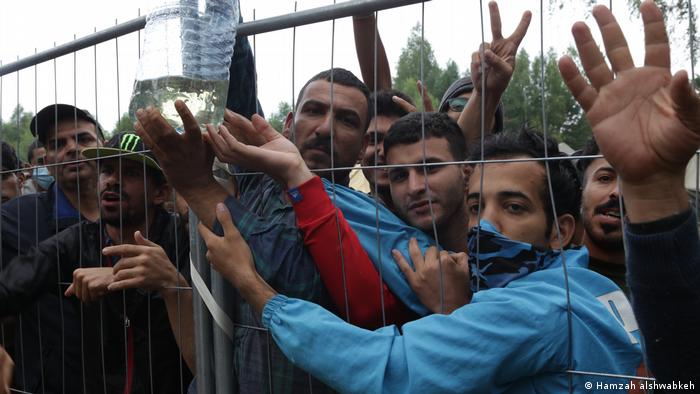 Just in the past few weeks, hundreds of would-be migrants have crossed the border from Belarus illegally. This year, there have been more than 3,500 people caught at the border, and Lithuanian officials fear that, by the end of the year, they would have seen as many as 15,000 more people from the Middle East and Africa arrive there. In 2020, there were only 81. Belarus has also announced that it will close the borders to its territory, basically trapping migrants in a kind of no-man’s-land there.

Just how sought-after a destination Europe is for some Iraqis can be seen on a Facebook page that was dedicated to migration into the EU via Belarus. In just a few days, tens of thousands had joined the page.

The page has since disappeared from the social media platform, but, before it did, it had featured almost all the information that asylum-seekers and migrants would have needed to make the journey: the price of an air ticket from Baghdad to Minsk, routes to the border, whether travelers needed the help of people smugglers or could manage alone.

Belarus is helping Iraqis and others get to the EU quite deliberately, said Lithuanian political scientist Vytis Jurkonis, who lectures at Vilnius University and is an expert on Belarusian affairs, as well as head of the local branch of Freedom House. And it is doing this for political reasons, he argued. 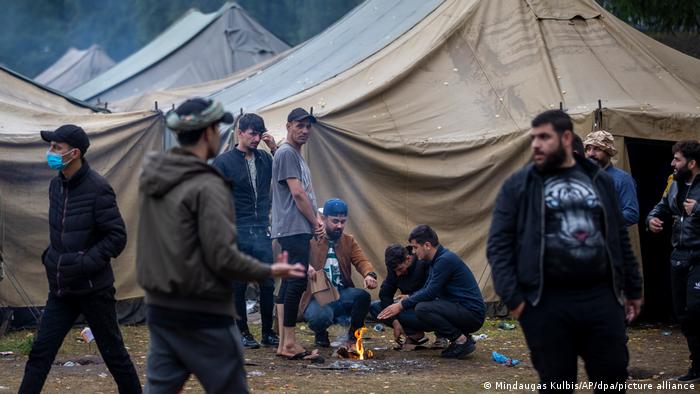 Stranded in the border area: Most of the migrants here come from the Middle East

“But Lithuania has neither the necessary infrastructure nor the required experience with questions around asylum to manage this situation,” Jurkonis told DW.

At the same time, Lithuania has also seen increasing numbers of Belarusian asylum-seekers who have left their country because of Lukashenko. “The Belarusian government is preventing their own citizens from crossing the Lithuanian border but allowing people from the Middle East to do so,” Jurkonis said.

Baghdad has since flown some stranded citizens back home. Those who do return to Iraq do so penniless or indebted. They have usually spent all their savings on the ticket to Minsk but are also expected to pay for their flight back.

One Iraqi who is still in Minsk told us over the phone that he had already tried to get into the EU four times through Poland. He had been unsuccessful so far, so this time he’d decided to try via Minsk. He didn’t make it, he said.

As he was crossing the border, he and his traveling companions were attacked by masked men. “They beat us with electric batons,” he said. “They dragged us into their vehicles and beat us there for a few minutes.”

Although he can’t prove it, he believes that the masked men were members of the Lithuanian border patrol.

Another Iraqi waiting in the camp in Rudninkai told us that it was clear he and the other would-be migrants there were being used, and that they had become political footballs, to be kicked around by various European countries. That hasn’t stopped him from wanting to live in the EU though, he said. He still really wanted to migrate there — although now, he said, he was considering legal ways of doing so.