When asked during a televised interview why he had chosen to nominate himself in the upcoming presidential elections, carpenter-turned-politician Ali Seif replied with a loud, “Why not?”

This seems to be the attitude adopted by an increasing number of candidates poising themselves as capable of taking on the responsibilities of a country in the midst of transition.

Media coverage has largely focused on the extremes of this spectrum, seemingly concerned with a handful of familiar names or the headline-friendly antics of those who can only be described as saboteurs or nut jobs. But what of the middle ground?

Egypt Independent went in search of the average people who feel they are ready to fill Hosni Mubarak’s shoes, even if they might have a hard time securing the 30,000 signatures or 30 MP endorsements needed to become official candidates.

Should he win the elections and become a figure on the global political stage, Saleh al-Sayed would still like to be referred to as al-Hajj Saleh.

“I am a simple man, a man of the people. I am not one for titles and prestige,” says the man running for president.

Born in Antara, a village east of Ismailia, Sayed is not only proud of his humble origins, he’s convinced they offer the only qualification required for running the country. Appearing on his promotional material dressed in galabeya and traditional prayer cap, Sayed admits, “I don’t have a big family name or a fancy education, but I do have all the answers to all our problems. I have real solutions, while the other candidates only have a hunger for power.”

Besides his status as a “man of the people,” the key to Sayed’s “inevitable” success is the fact that his plans “all come with a timeframe.

"When I propose a plan, I outline it. When I say in two years’ time all forms of crime will be obsolete, and that the police and the people will be the best of friends, you might think this is fantasy talk, but when you listen to my plan, you will realize it’s child’s play.”

But when he describes his plans, Sayed is short on details.

Sayed has an unusual plan to solve unemployment, one of Egypt’s most pressing problems. He proposes that large portions of the population be relocated to “closed cities governed by the military,” where residents will be forced to participate in “swimming and horse-riding lessons, as well as target practice,” in addition to mandatory training in “all industries, and the crafting of handmade goods.”

While the videos and written statements on his website offer more detail, they still fail at painting a clear picture of what Sayed’s policies are, or who he really is, other than a “man of the people.”

When discussing the extent of the role he believes religion should play in politics, Sayed points to why he wouldn’t, for example, encourage internet censorship. “It just doesn’t make sense,” he claims. “If you understand computers the way most Egyptians do, you would know that the internet is just a bunch of programs. All you need to do is not install the bad ones, and delete them when you see them.”

“There’s no arguing against the enforcement of Sharia,” he says. “But, obviously, you cannot enforce it upon the non-Muslim population.” In response to Egypt Independent’s suggestion that such a system would be a cause for further discrimination and division, Sayed insists “not at all. It’s based on pure logic — if a Muslim steals, you cut off his hand to purify him of his sins. But what sin will you purify a non-Muslim of? Where do you even start? It can’t be done.”

As the conversation rapidly devolved into political-incorrectness, casual racism and terrifyingly frank sex talk (Sayed laughed off his Facebook post of a video titled “NO WAY! FUNNY UPSKIRT PRANK LOL!” saying, “I’m a curious man.”), this particular candidate seemed to lack some of the sensibilities most voters will likely look for in a leader.

While Saleh al-Sayed believes in purity through loss of limbs, Ashraf Nassar doesn’t see the need to take things that far.

“Before you cut off a thief’s hand,” he suggests. “Why not try to find out what made them steal in the first place?

“You can’t just label and judge accordingly,” he says. “You can’t, for example, call a woman a prostitute without taking a closer look at her life, and examining all the ways she isn’t being satisfied — whether emotionally, intellectually, financially or sexually.”

A seasoned legal accountant and self-proclaimed “moral compass,” Nassar is as fed up with the “flip-flop and galabeya wearers, the motorcycle drivers and reefer addicts” claiming presidential aspirations as he is with the media’s fascination with them. “These are all distraction methods,” he claims, “to keep the Egyptian people from getting back on track, or building hope in ever doing so.”

In response, Nassar has based his platform on “a strong sense of integrity” and has even written a statement of intent to prove it.

The statement of intent — stamped and signed by Justice Ministry officials, and distributed within a small radius around the candidate’s headquarters in Giza — promises the creation of 2 million jobs within the first three months of Nassar’s presidency (a goal which he later, on his website, revised to 12 million  jobs within the first 36 months). The statement also includes a promise to “restore the nation’s dignity, enforce justice, and give attention to the plight of women, children, youth, the handicapped, peasants and laborers” — promises made despite Nassar’s “full realization of the scale of ignorance and size of crises and problems” currently plaguing the nation. Details, however, remain as elusive as ever.

“Every recipe has a secret sauce,” Nassar says, coyly. “I can’t just give you my secret sauce.”

Especially when, he says, it’s been stolen before. “The few successes of the Ganzouri administration have all stemmed from decisions suggested in a document which I wrote and sent to the prime minister personally,” Nassar says, refusing to directly claim any credit for “general improvements.”

The same thing, he claims, happened with Essam Sharaf’s government. “I laid down 39 points of suggestion for them. Sharaf took 26 and passed them off as his own.”

Nassar, however, still has a lot of suggestions to make. Previously a member of the Finance Ministry’s Organization of Accountants and Auditors, Nassar has drawn on his background experience to shape his policies and priorities.

“As an Egyptian, you are already in debt the moment you’re born,” he states, referring to what he believes to be an economy in critical condition. “Free trade cannot possibly exist when we rely this heavily on imports. Forty years ago, the majority of Egyptian families were producers. Now we’ve developed into a society of consumers. We need to take things back to the way they were.”

“I reject that Egypt be labeled as a ‘developing’ country,” Nassar says. “And I will keep it from ever becoming one.” Once again, details are left to the voter’s imagination.

"All that matters is that I’ve made written, public promises,” Nassar offers. “If I fail to fulfill them, sue me.”

Wessam Abdel Gewad has dreamed of becoming president ever since he was 23 years old after what he describes as a series of “wake-up calls.” The first was his graduation from high school, when the young Port Said native found himself unable to attend his university of choice in Cairo because of the cost of tuition.

“I worked really hard during school, and was one of the best and most distinguished students in my graduating class,” he recalls. “My test scores could have gotten me anywhere, but they didn’t. That’s when I realized how little opportunity there really is, especially for those outside of Cairo, which is most Egyptians.”

“My father was ill, so we had to take him to the hospital,” says Abdel Gewad. “The elevators weren’t working, so my brother and I had to carry him up four flights of stairs.” The trip took its toll on the elderly man. “He died less than an hour later, because they couldn’t find an oxygen tank to help him breathe.

“This is what happened to a man who paid health insurance,” Abdel Gewad sighs, before recounting an almost identical incident involving his mother.

Abdel Gewad went to medical school in Port Said, and grew increasingly alarmed over “the disconnect I saw between the theoretical side of what we were being taught, and what was actually put into practice.” A disillusioned graduate, Abdel Gewad then “withdrew from everything, turning to books instead.”

“I pretty much moved into Port Said’s libraries, one at a time,” he says. “And read anything my eyes fell upon — novels, essays, textbooks."

The third and final wake-up call was the realization of his dilemma.

“I became suddenly aware of how there is no actual Egyptian ‘state,’ no country, but also of the fact that I could never live anywhere else. In short, if I wanted things to change, I would have to work for it.”

“That’s why I want to become president,” he says.

A divorced former sales executive who has “dabbled in” advertising, Abdel Gewad also claims to have been an advocate for change long before 25 January 2011.

“I started the Egyptians for Egypt movement through word of mouth, not the internet,” he says. Nonetheless, the movement grew, reaching other governorates but failing to detect any signs of the then-brewing storm. “Being in Port Said means I was somewhat disconnected from the political scene,” he admits.

The revolution itself may have caught him by surprise, but it hasn’t thrown him off course. Instead, Abdel Gewad has only redoubled his efforts to address what he sees to be a set of increasingly urgent issues.

For him, the priority is clear: “Slums,” he says without hesitation. “Proper housing. The basic needs — four walls and a ceiling. If, as a president, you cannot provide that for every human soul in your country, then you are not a president.”

His proposal for an immediate solution is clear and simple, if controversial. “There are people in this country who own five or six apartments, or houses. We will take people off the streets and out of the slums, and move them into all available apartments and houses. This country has enough housing to shelter every single one of its citizens, and it will be utilized.

“This will not be optional,” he emphasizes. “Real estate owners who have a problem with this can deal with the state, which will pay them a fair rent. The bottom line is this: no Egyptian will ever sleep on the street again.”

Abdel Gewad has adopted a similarly hard-line approach to unemployment.

“It will be abolished immediately,” he promises, “through the formation of social labor squads, the members of which, for minimum wage, will work on the long list of abandoned national projects, such as the New Valley and Toshka.” Those squads will also work on refurbishing the national infrastructure and the distribution of state-supplied services.

These are policies that he claims will “restore a sense of pride. I want to make it so that privileged Egyptians feel the urge to invest in their country instead of seeking to build their lives elsewhere. I want to battle corruption by providing assurance to the people.”

“All our problems are a product of fear and insecurity,” he concludes. “When people start having faith in their country, when they stop believing that it’s out to get them all the time, and that they need to steal from it in order to survive, that’s when things will start to change.” 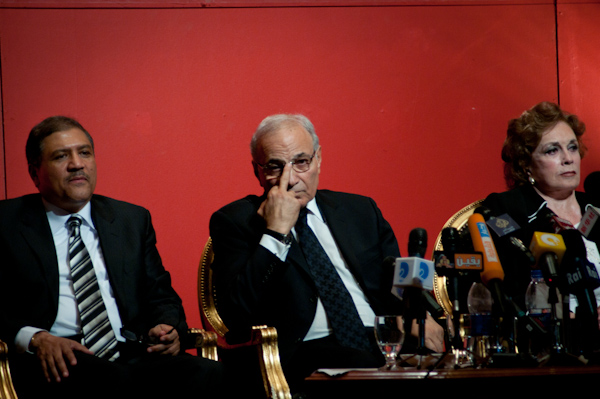