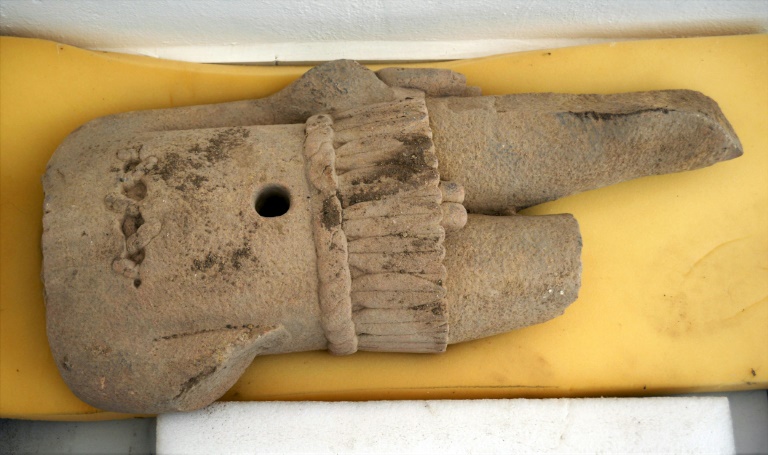 Archaeologists in Mexico have found the first temple to the pre-Hispanic deity Xipe Totec, a god of fertility and war who was worshiped by sacrificing and skinning captives.

Evidence indicates that priests ritually sacrificed their victims on one of the temple’s two circular altars, then flayed them on the other and draped themselves in their skin, Mexico’s National Institute of Anthropology and History said in a statement.

Historians have long known that Xipe Totec (“the flayed god”) was worshiped by numerous peoples across what is now central and western Mexico and the Gulf coast.

But the discovery — made among the ruins of the Ndachjian-Tehuacan archaeological site in the central state of Puebla — is the first time a temple dedicated to the god has been found, the institute said.

The artifacts uncovered at the site include three stone sculptures of Xipe Totec: two skinned heads and a torso, whose back is covered in engravings representing the sacrificial skins worn by the god.

“Sculpturally speaking it’s a very beautiful piece. It measures approximately 80 centimeters (30 inches) tall and has a hole in the belly, which according to historical sources is where a green stone was placed to ‘bring it to life’ for ceremonies,” said Noemi Castillo Tejero, the lead archaeologist on the project.

The skulls measure about 70 centimeters tall and weigh some 200 kilograms (440 pounds).

The temple would have been used from around the year 1000 until about 1260, the institute said. The Spanish takeover of Mexico began in 1519 with the arrival of the conquistador Hernan Cortes.

The institute said Xipe Totec was one of the most important gods in pre-Hispanic Mexico, and was worshiped in a ceremony called Tlacaxipehualiztli, which in the indigenous Nahuatl language means “to wear the skin of the flayed one.”

Sacrificial victims were killed either through gladiatorial combat matches or by being shot with arrows, then flayed to glorify Xipe Totec, it said.

Their skins were then buried at the foot of the altars.

Two holes filled in with earth were found in front of the altars at the Ndachjian-Tehuacan site, it said.