A military source said Saturday that the Navy has failed to find any trace of the sailors who were onboard the boat "Zamzam," which was lost at sea off the coast of Matrouh Monday.

All naval personnel returned to their bases Friday after failing to find any of the sailors. The source told Al-Masry Al-Youm that three brigades of destroyers, rescue ships and auxiliary vessels searched the sea for four days, but coudl not find them.

"The sea swallowed all of the sailors. It has become impossible to find them alive. It is hard to find their bodies due to the unstable sea conditions," the source said.

“Naval forces were launched from the Alexandria and Marsa Matrouh bases," the source added. "They formed a military operations area over 317 miles. They also used helicopter and a C130 aircraft, which is able to fly through bad weather conditions." 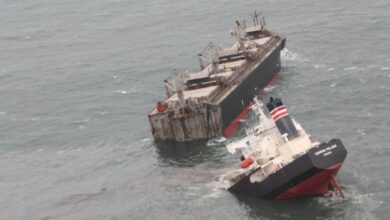 Ship sailing under Panama flag runs aground in northern Japan, splits in two