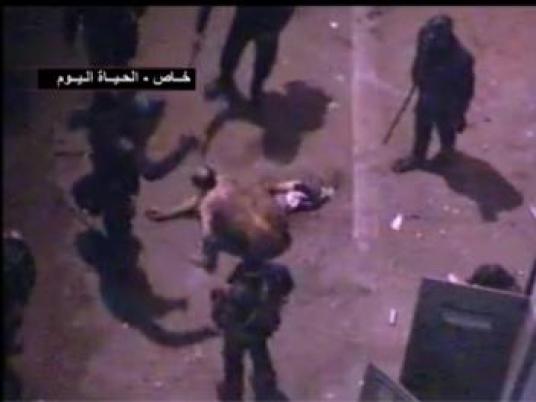 Making front-page news in almost all of Monday’s papers are the conflicting narratives of what happened to Hamada Saber — the man who was filmed being stripped naked, beaten and dragged by riot police forces outside the Ettehadiya Presidential Palace on Friday.

All opposition, independent, and state-owned newspapers run stories and photos of Saber’s ordeal outside President Mohamed Morsy’s palace – with the exception of the Muslim Brotherhood’s mouthpiece paper, Freedom and Justice, where there is not a single article or entry regarding this incident.

Also covered in Egypt’s daily papers — especially Freedom and Justice — are news of protests and clashes outside the presidential palace, including an attempt on Sunday to destroy one of the gates of the Ettehadiya Palace by means of a winch.

Despite videos of a naked Saber being dragged and beaten by Central Security Forces (CSF), the story was complicated by Saber claiming — while he was being held in a police hospital — that it was protesters who had stripped and beat him, while police forces moved in to protect him from the angry mob.

In privately-owned paper Al-Watan, one headline reads “Son: An officer told my sister ‘we will help you, if you don’t mention that the police beat him.’” Similarly, independent Youm7, features as story under the title, “Daughter of dragged man accuses him of lying.”

The article mentions that Saber’s daughter called-in on a live talk-show in which she claimed that her father was covering-up the truth. The daughter denied that protesters had assaulted Saber.

In privately-owned Al-Shorouk, “Hamada’s family asks that he be relocated from the police hospital,” as he is reportedly being threatened by police officers. This article cites Saber’s son as saying “my father is terrified and besieged” adding that Saber “was weeping in a fit.”

Also in Al-Shorouk is an account of a conscript in the CSF accused of beating Saber. The soldier says, “We found him naked amongst the protesters and then beat him up because he insulted us.”

Meanwhile independent paper Al-Sabah mentions that a newly released video contains footage of Saber swaying he was indeed stripped, dragged and beaten by CSF troops. “They tortured me, but I forgive them,” Saber is reported as saying. Al-Sabah also claims that the Interior Ministry “confesses to pressuring the dragged victim into changing his account of events.”

In state-owned Al-Gomhurriya, “Appeal filed before public prosecutor accusing Hamada of misleading public opinion and tarnishing the image of the revolution.” Lawyer Ahmed Yehia filed the appeal against the victim of police brutality, not against the ministry of interior which is responsible not only for assaulting him, but also reportedly threatening and pressurizing him.

“The rights of the dragged man haunt Morsy” reads the top headline in the liberal Wafd Party’s daily. The article reports that “Saber is being subjected to police threats” while in hospital. Another says that “Police troops are simply following orders” and that “their policies have not changed … as is evidenced by the repeated beatings and dragging of protesters since the days of the Supreme Council of the Armed Forces to the elected president.”

In other news, Al-Wafd runs an article headlined: “Aborted attempt to storm the Ettehadiya Palace at dawn.” The article explains that anti-Morsy protesters tied ropes to one of the gates of the presidential palace, and used a winch in a (partially successful) attempt at tearing down the gate. In response, security forces fired tear gas at these protesters and attempted to apprehend them.  The winch operator was reportedly arrested following his attempt to pull down the gate.

The pages of Freedom and Justice denounce claims that the protests were peaceful — contradicted, they say, by the use of a winch and Molotov cocktails to attack the palace of “Egypt’s democratically elected president.”

The Brotherhood’s mouthpiece denounces the opposition group known as the "National Salvation Front," describing it as the “Front for the Salvation of Criminals.” This paper also uses the words protesters and “thugs” interchangeably.

It also runs an article on the recent emergence of Egypt’s Black Bloc, arguing that it was established “to defend secularism and remnants of the old regime.”

Moreover, the Brotherhood’s mouthpiece claims that Egypt’s Black Bloc is directly inspired by “a secretive terrorist organization operating in Turkey” — dubbed Ergenekon — which seeks to forcefully overthrow the ruling Turkish Justice and Development Party due to its Islamist orientation.

The paper rather desperately attempts to draw parallels between this secretive (perhaps mythical) Turkish ultra-nationalist grouping and Egypt’s anti-authoritarian Black Bloc — which apparently share nothing in common other than their black masks.

Meanwhile, Al-Watan runs a headline reading “Ibn Khaldun Center resorts to the International Criminal Court” (ICC) with a report “The collective liquidation of the opposition under Muslim Brotherhood’s rule.” This independent civil society organization is reportedly resorting to the ICC with a list of protesters and journalists who were killed, abused, tortured, or injured by Morsy loyalists and police forces outside the Etthadiya Palace in 2012 and 2013.