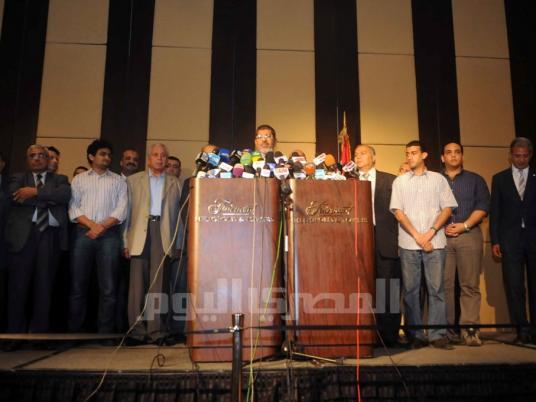 In an attempt to break with the past and to overturn toppled President Hosni Mubarak’s legacy of autocratic rule, Egypt’s first freely elected president, Mohamed Morsy, committed himself to appointing a presidential team of experts to aid him in handling the tough job of managing the country.

Although Mubarak had a small circle of aides whom he trusted, advisers were never appointed to an official role. Morsy’s commitment, however, comes not only as a reversal of Mubarak’s legacy but also as a potential self-distancing from the Muslim Brotherhood, which critics say illegitimately influences his mandate.

But the vagueness about the exact role and structure of the presidential team has raised concerns about how genuinely the new president is interested in taking advice from a team of aides and consultants outside the scope of the Brotherhood.

According to a 28 July announcement by presidential spokesperson Yasser Ali, the presidential team might be announced Thursday, along with the new members of the Cabinet.

“The announcement of the presidential team was postponed for not completing some consultations related to the functions of team members,” said Ali.

However, Ali didn’t reveal the structure and mandate of the team members and whether it would include a vice president.

Meanwhile, the Brotherhood’s Freedom and Justice Party announced a week ago that Morsy asked three people to be his advisers, namely leftist activist Wael Khalil, political science professor Pakinam al-Sharqawy and Coptic thinker Samir Morqos. The name of Mohamed Selim al-Awa, an Islamist thinker, lawyer and former presidential candidate, was also mentioned by Ali, but he said consultations about Awa’s position are still in progress. Awa met with Morsy on 24 July, according to state-run newspaper Al-Ahram.

Khalil said it was a very preliminary offer and they haven’t yet discussed the details of his role since he met with Morsy three weeks ago.

“It’s an attempt at openness, but it will depend on my role and whether it is effective or not,” he said.

Before being elected, Morsy had vowed during a news conference on 29 May to appoint a woman and a Copt as deputies if he was elected president. The idea of a presidential team came up again during the presidential election runoff when politicians suggested former presidential candidates Abdel Moneim Abouel Fotouh and Hamdeen Sabbahi as deputies to Morsy. Both later refused the post.

Abouel Fotouh and Sabbahi had reaped some 37 percent of the vote in the first round of the presidential race. Afterward, some called for them to coalesce with Morsy to defeat his rival, Ahmed Shafiq — Mubarak’s last prime minister — in the runoff.

But the National Front, which was formed 22 June, has now criticized the lack of transparency in Morsy’s choices of the government and presidential team.

In a news conference Saturday, political science professor and National Front member Heba Raouf called on the president to declare standards for selecting his deputies, advisers and administrative team, saying it was unclear if he will have a consultative or administrative team.

Khalil also denounced what he called Morsy’s lack of transparency and clear vision.

“We need a clear plan on what Morsy will do to the people to solve their problems and how he is going to achieve the goals of the revolution,” Khalil said.

Hassan accused Morsy of relying on the Islamist group to make decisions.

“It’s absurd that he depends only on his group, which is illegitimate and lacks the caliber needed to run the country,” he told Egypt Independent, referring to the fact that the Brotherhood is not a legal entity. “I think that Morsy is busy with the Brotherhood’s project and not the nation’s.”

Meanwhile, the only formally appointed consultant to the president so far is Judge Mohamed Fouad Gadallah, the deputy head of the State Council, which decides on administrative disputes in which a national body is involved. He is appointed as the president’s adviser for legal and constitutional affairs.

“Morsy has been completely separated from the Brotherhood, and his independence from the Guidance Bureau increases by time,” Gadallah told Egypt Independent.

Gadallah, who is also an international relations professor at Cairo University, is not a member of the Brotherhood or its Freedom and Justice Party. However, he publically supported Morsy in the runoff against Shafiq and refused to monitor the elections with other judges to avoid bias. He is a founding member in the National Front.

The judge, who is in his mid-40s, worked as an adviser to former Prime Minister Essam Sharaf for 20 days but resigned because of objections to the Cabinet formation at the time. He takes pride in being one of the few revolutionary judges who joined and organized protests in 2010 against the rigging of the parliamentary elections by Mubarak’s now-dissolved National Democratic Party.

Gadallah said he played a role in coordinating between Islamist forces and secularists during the revolution, a role that was acknowledged by several revolutionaries.

Since his appointment, Gadallah supervised the formation of two legal committees decreed by Morsy. The first one is studying the cases of civilians tried before military tribunals. It was on this committee’s advice that the president pardoned 572 military prisoners who were detained in connection with the 25 January revolution or protests during the transitional period.

But the decision also included 25 leaders of Islamic Jihad and Jama’a al-Islamiya who were imprisoned before the revolution.

The second is a fact-finding committee that is investigating the murder and assault of protesters from the beginning of the revolution until the end of the transition period. These incidents include waves of violence in which military and police forces assaulted protesters under the transitory rule of the Supreme Council of the Armed Forces, as it took over after Mubarak resigned.

Gadallah was also part of the legal committee that advised Morsy to make the controversial decision to restore Parliament, defying the Supreme Constitutional Court’s earlier verdict and the SCAF’s order to dissolve it in mid-June. The incident marks another chapter in the apparent tit for tat between the Brotherhood, which dominated the dissolved Parliament, and the military junta.

Morsy’s decision was received by an outrage from legal experts, and some political groups and the Supreme Constitutional Court later froze it. Judge Zaghloul al-Balshy, deputy head of the Court of Cassation, criticized Gadallah and others who advised Morsy to make such a decision.

“Whoever directed Morsy toward that decision has to leave his job immediately because he is trying to harm him,” Balshy told Egypt Independent. “He has to carefully select his legal advisers, who should be informed and should care about his interests.”

Gadallah, however, argued that the decision intended to respect voters’ will and to fill in the legislative authority’s gap until the next parliamentary elections take place. The SCAF retained legislative power after Parliament’s dissolution.

“We are acting as if it [the supplement] doesn’t exist,” said Gadallah.

Morsy is also not spared from criticism for appointing former Water Resources and Irrigation Minister Hesham Qandil, a man with little political record, to the post of prime minister. Many say Qandil’s appointment is an indication of Morsy’s lack of interest in working with experienced and informed figures.

“Qandil has very good managerial skills. He is open-minded, and the fact that he is not popular doesn’t make him incompetent. We discovered him,” Gadallah said in response to criticisms about choosing Qandil for such a critical position.

Meanwhile, more than one source contacted by Egypt Independent said Gadallah is close to Shater, though this claim could not be verified.

Hassan cast doubt on whether the presidential team would be chosen on the basis of competence. Meanwhile, he said he would advise Morsy to appoint deputies he entrusted with specific portfolios, especially because the president is not experienced in managing the state.