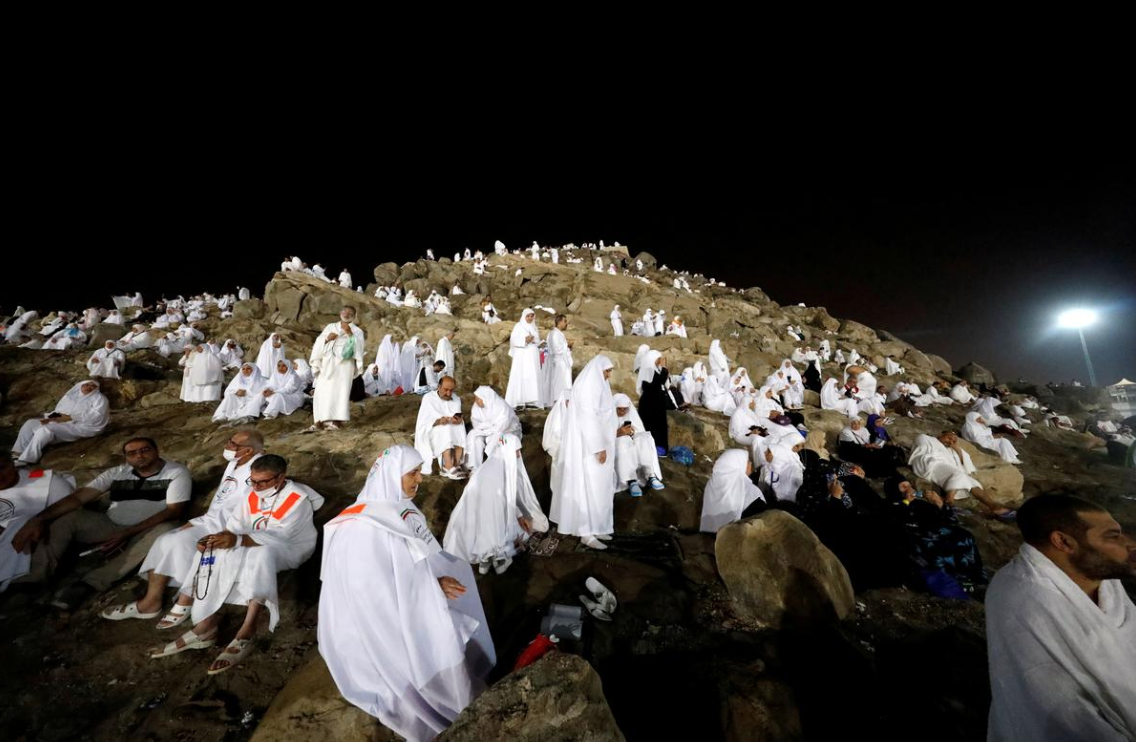 MUZDALIFA, Saudi Arabia (Reuters) – Nearly 2.5 million Muslims gathered at Saudi Arabia’s Mount Arafat on Saturday for a vigil to atone for their sins, and then descended to Muzdalifa for the final stages of the annual haj pilgrimage amid summer heat and regional tensions.

Pilgrims clad in white robes signifying a state of purity spent the night in a sprawling encampment around the hill where Islam holds that God tested Abraham’s faith by commanding him to sacrifice his son Ismail. It is also where Prophet Mohammad gave his last sermon.

Other worshippers who had been praying in the nearby Mina area ascended in buses or on foot from before dawn. Some carried food, carpets for camping and fans to keep cool as temperatures rose towards 40 degrees Celsius (104 degrees Fahrenheit) before heavy rains and lightning erupted.

Once on the hill, pilgrims sat or lay in whatever space they could find. Many prayed, some cried and others took selfies or streamed videos to friends and relatives back home.

Zaid Abdullah, a 30-year-old Yemeni who works in a supermarket in Saudi Arabia, said he was praying for his own country, where war has killed tens of thousands of people and caused the world’s worse humanitarian crisis, and for Muslims around the globe.

“We can tolerate the heat because our sins are greater than that,” he said as he approached the granite hill also known as the Mount of Mercy. “We ask God to alleviate the heat of the hereafter. As for the heat of this life, we can bear it.”

Hamood Ismail and his wife Raghdaa traveled from Syria, through Turkey, while taxi driver Khaled Maatouq came from Libya. They all said they were seeking an end to the suffering in their homelands which have been torn apart by conflict.

For others, the pilgrimage is a form of relief. Egyptian merchant Ramadan al-Jeedi said he was grateful to accompany his mother after his father died last year.

“It’s the greatest feeling, to feel that God the almighty chose us to be in this place,” he said.

Nadzmi Maruji Naid from the Philippines said he felt comfortable but a little nervous about making haj for the first time: “God willing, everyone here will be accepted by Allah.”

Some 2.49 million pilgrims, mostly from abroad, have arrived for the five-day ritual, a religious duty once in a lifetime for every able-bodied Muslim who can afford it.

Among them are 200 survivors and relatives of victims of the attacks on two New Zealand mosques in March.

After spending the day on Mount Arafat, the pilgrims moved at sunset to the plain of Muzdalifa to gather pebbles to throw at stone columns symbolizing the devil at Jamarat on Sunday, which marks the first day of Eid al-Adha, or the feast of sacrifice.

Saudi Arabia stakes its reputation on its guardianship of Islam’s holiest sites, Mecca and Medina, and organizing the pilgrimage.

A perennial concern is the potential for disease spreading among pilgrims, who spend five days in close quarters, often eating outside and sleeping on the ground near holy sites.

The world’s largest annual gathering of Muslims has in the past also seen stampedes, fires and riots, with authorities sometimes struggling to respond. Hundreds were killed in a crush in 2015, the worst disaster to strike haj for at least 25 years.

The seizure of commercial vessels and attacks on tankers near the Strait of Hormuz, a narrow waterway separating the two countries, have unsettled shipping lanes linking Middle Eastern oil producers to global markets.

The area has become the focus of a standoff between Tehran and Washington, which has beefed up its military presence in the Gulf since May.

Saudi officials asked pilgrims to focus on the rituals of worship and warned against politicizing the rite.

In a haj message, Iran’s Supreme Leader Ayatollah Ali Khamenei on Saturday condemned a U.S. blueprint to end the conflict between Israel and the Palestinians and called on pilgrims to oppose it.

The message was read at a rally held by Iranian pilgrims inside their compound, according to Iran’s state television which showed hundreds of pilgrims gathered in a tent chanting slogans including “America is Allah’s enemy” in Arabic, and holding signs that read “Death to Israel” and “Death to America”.

Pilgrimage is also the backbone of a Saudi plan to expand tourism under a drive to diversify the kingdom’s economy away from oil. The haj and year-round umrah generate billions of dollars in revenue from worshippers’ lodging, transport, fees and gifts.

Officials aim to increase the number of umrah and haj pilgrims to 15 million and 5 million respectively by 2020 and the umrah number to 30 million by 2030.

Photo: Muslim pilgrims gather on Mount Mercy on the plains of Arafat during the annual haj pilgrimage, outside the holy city of Mecca, Saudi Arabia August 10, 2019. REUTERS/Umit Bektas

Muslims at hajj gather on Mount Arafat to atone for sins

Q&A: The hajj pilgrimage and its significance in Islam