YANGON (Reuters) – Myanmar began releasing prisoners on Friday after the president announced he would pardon nearly 7,000 people in addition to thousands released earlier this month.

President Win Myint granted unconditional amnesty to 6,948 prisoners serving jail terms around the country “to bring delight to the citizens of Myanmar and taking into consideration humanitarian concerns,” according to a statement.

More cases were being scrutinized for possible pardons, it said.

More than 9,000 prisoners were released on April 17, the first day of the traditional New Year, but human rights activists were disappointed that the earlier amnesty only included two people jailed on political charges.

Min Tun Soe, a spokesman for the prisons department, told Reuters that Friday’s amnesty would also not include many activists.

“As far as I can see on the list, the majority are drug-related cases,” he said.

Two activists in the northern state of Kachin were released on Friday, one of them, Zau Jat, told supporters and journalists outside the prison in the city of Myitkyina.

“There are many prisoners in this prison who experienced an unfair judiciary,” Zau Jat said in comments broadcast live over Facebook.

A court in December convicted Zau Jat and fellow activist Lum Zawng, also released on Friday, under Myanmar’s peaceful assembly law and sentenced both to six months in prison.

“Even if there was no amnesty, we would be released next month, so this is just (the authorities) trying to improve their image,” said Zau Jat.

Min Tun Soe and another prison official told Reuters that Friday’s release did not include prisoners held in Yangon, excluding two Reuters reporters jailed for breaking the Official Secrets Act from the amnesty.

The Assistance Association for Political Prisoners (AAPP), a human rights group monitoring the prisons, said earlier this month there were 45 people serving prison sentences for “political activity,” most of them for alleged links to armed groups.

Government spokesman Zaw Htay told reporters in the capital Naypyitaw that armed group members and those involved in “politically related cases” would be released in a third amnesty of more than 6,000 prisoners at an undisclosed date, according to a video published by The Speaker, a news outlet.

Zaw Htay did not respond to calls seeking comment. 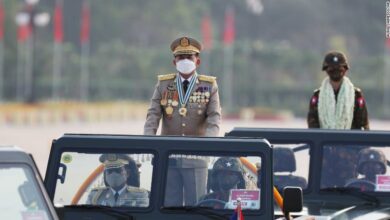