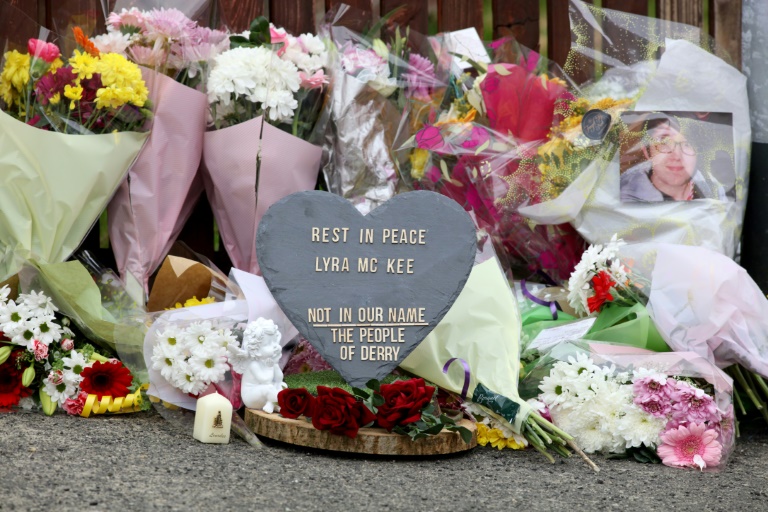 Dissident republican group the New IRA on Tuesday took responsibility for killing Northern Irish journalist Lyra McKee last week as police said they had arrested a 57-year-old woman in connection with the shooting.

The New IRA “offer our full and sincere apologies to the partner, family and friends of Lyra McKee for her death,” it said in a statement to The Irish News.

The newspaper said the paramilitary group used a recognized codeword — an established method of communication during the decades of sectarian conflict in Northern Ireland known as “The Troubles”.

McKee, 29, was shot in the head on Thursday as dissident republicans clashed with police in the Creggan housing estate in Northern Ireland’s second city Londonderry, also known as Derry.

Police in Northern Ireland said on Tuesday that a 57-year-old woman had been arrested under the Terrorism Act in connection with the killing.

Two men aged 18 and 19 who were arrested earlier in the investigation have been released without charge.

Tributes to McKee, who was also a writer, were led by her partner Sara Canning, who said her “amazing potential was snuffed out by this single barbaric act”.

While admitting responsibility, the New IRA attempted to justify its actions by claiming she was killed during an attack on “enemy forces”, and accused police of provoking the riot which preceded her death.

“In the course of attacking the enemy Lyra McKee was tragically killed while standing beside enemy forces,” the statement said.

“On Thursday night, following an incursion on the Creggan by heavily armed British crown forces which provoked rioting, the IRA deployed our volunteers to engage,” the New IRA statement said, according to The Irish News.

‘A pointless and futile act’

In the wake of McKee’s death, Northern Ireland’s six main political parties — including rival unionists and republicans who have been unable to form a devolved government for more than two years — issued a rare joint statement.

“It was a pointless and futile act to destroy the progress made over the last 20 years, which has the overwhelming support of people everywhere,” it said.

The Saoradh party, which represents dissident republicans but denies being the political wing of the New IRA, said on Friday that “heavily armed” police had gone in to the area “to attack republicans”.

“The inevitable reaction to such an incursion was resistance from the youth of Creggan,” it said.

On Monday a crowd gathered outside the Londonderry office of Saoradh, marking its walls with handprints of red paint in an act of protest.

A march by the dissident group in central Dublin on Saturday was also met with widespread scorn from politicians and the press.

Irish Prime Minister Leo Varadkar said their actions were “beneath contempt” and “an insult to the Irish people”.

McKee’s killing, the latest violent act to shake the troubled province, came in the run-up to Easter weekend, when republicans opposed to the British presence in Northern Ireland mark the anniversary of a 1916 uprising against British rule.

A car-bombing and the hijacking of two vans in Londonderry earlier this year were also blamed on a dissident paramilitary group.

‘Celebration of her life’

The 1998 Good Friday peace deal largely brought an end to three decades of sectarian bloodshed between republican and unionist paramilitaries, as well as British armed forces.

About 3,500 people were killed in the conflict — many at the hands of the Irish Republican Army (IRA).

The group called a final ceasefire in 1997 and announced an end to its armed campaign in 2005, stating that it would seek to achieve its aims through peaceful political means.

The New IRA is one of a number of dissident republican paramilitary groups opposed to the shift towards non-violent tactics to bring about a united Ireland.

There have been concerns that paramilitaries could be seeking to exploit the current political turbulence over Northern Ireland and its border with the Republic of Ireland caused by Brexit.

McKee’s funeral is to be held Wednesday at St Anne’s Cathedral in Belfast.

“It’s going to be a celebration of her life”, Canning said in a Facebook post, urging people to wear Harry Potter or Marvel-themed T-shirts.

“I know she would love it.”