On the outskirts of Cairo, across the street from gated compounds where residents play golf on an 18-hole course, plush apartments sit vacant without buyers.

As their luxury fittings gather sand blown in from the surrounding desert, many Egyptians say they cannot afford a home in the city of 20 million, where buildings are huddled so close together the only view is often of their neighbor’s kitchen.

At the bottom end, millions live in shantytowns that line Cairo's highways or have settled down in cemeteries, sharing their homes with the dead for lack of a better option.

Even 30-year-old Rabab Abd ElMonam, a mother of three whose husband works for a multinational in Egypt, find themselves priced out of the market for new suburban developments.

"The sheer amount of apartments offered is enormous, especially in the new suburbs," Abd ElMonam said. "But prices are simply too high and payment options are not always suitable."

A 2004-2008 property boom that provided homes for the wealthy elite helped Egypt weather a global downturn. But a glut of luxury developments being delivered through 2011 means developers need to switch to middle class properties to keep revenues coming, analysts say.

Property firms acknowledge they need to change tack, but complain about a tiny mortgage market that makes it difficult for anyone but the wealthy to borrow and a legal row over state land sales that has made firms wary of new projects.

"Any real estate company (must) realize that within five years of today, if it is not primarily involved in middle income housing backed by a strong mortgage market, it will be missing the good pie," Maher Maksoud, chief executive officer of SODIC, told Reuters.

That would be considered affordable in many countries but prices out the majority of people in Egypt, where UN figures put per capita gross domestic product (GDP) at 10,000 pounds, or US$1,780, a year.

Even middle income families like Abd ElMonam's struggle to find such funds when mortgage options and supply are limited.

Investment bank Naeem estimates an annual demand of some 200,000 homes in what it describes as the middle income bracket, those on annual incomes ranging from 27,000 to 203,000 pounds.

"The developers have been unable to find the right model to build affordable housing," Patrick Gaffney, real estate analyst with HSBC, said. "But they will have to reach into the middle income because, while there can always be sales at the high end, volumes will never be as great."

One way to unlock the middle income property market would be to expand mortgage lending. Mortgages make up less than half a percent of GDP, compared to 14 percent of GDP in Morocco or over 80 percent in Britain in 2008.

Total mortgages in Egypt stand at 4.5 billion pounds and represent no more than 75,000 customers.

"That is nothing. It is equivalent of one firm's sales for a year," said Yasseen Mansour, chairman and CEO of developer Palm Hills. "Mortgages will have to grow."

New laws drafted by the government may start to address some problems cited by lenders. For example, they will allow agencies to evict those who default on loans in six to seven months, as opposed to as much as seven years under the current system.

But other obstacles have yet to be addressed. Iman Ismail, managing director of Egyptian Mortgage Refinance Company (EMRC), said less than 30 percent of the country's property is registered, which is a problem for lenders who need to keep housing deeds as collateral against the loan.

Analysts say attitudes also need to change among conservative banks, who set interest rates that can be 13-14 percent, prohibitively high for even well-paid applicants like Amr Amin, a graduate from a top university with a steady job.

"The banks were charging ridiculously high interest rates that would have made me completely broke," said Amin, who resorted to his family for support in buying an apartment.

Orascom Development Holding (ODH) is a pioneer in affordable homes with its Haram City project, near the pyramids of Giza. The aim is to house 25,000 people in 11,000 units.

"Our business model needs this mortgage market to grow for others to replicate," said Omar Elhitamy, managing director of the ODH unit Orascom Housing Communities.

Finding calm in Cairo is almost impossible amid the hooting cars, loud voices and general bustle of millions of people making their way in one of the world's largest cities.

Residents, who at times have to circle the block several times before finding a parking spot under their own buildings, want out of the congested and suffocating metropolis, where the sun is often obscured by a gray layer of pollution.

Developers looking to capitalize on a government plan to create nine satellite cities in the desert flaunt advertisements of running children in a safe and clean idyllic, a far contrast from the dirty, bumpy roads of Cairo.

But firms have become more cautious about any new projects because of a spate of legal challenges contesting state land sales. Those erupted after a court ruled in June that the land contract for Talaat Moustafa Group's (TMG) flagship Madinaty project was illegal as it was not sold at auction.

The government said it would uphold the court ruling by scrapping the original contract but would resell the land to TMG under its right to act in the public interest. Investors welcomed the swift action, but it has not stopped copycat cases.

The government has pledged to draft new legislation aimed at resolving the muddle, which is caused by two conflicting laws — the first allowing the state to sell land directly to developers and a second saying it must be sold at auction. But new legislation will need to wait until a new parliament is in place after a 28 November election.

"I think the government will fix it but I think they are going to be slower than everyone expected. It is very complicated and it is so political, there are very few things that are as political as land," HSBC's Gaffney said.

A victory for the ruling National Democratic Party is not in doubt, but a new parliament may not rush through a law seen as helping the business elite, which ordinary Egyptians grumble has been the main beneficiary of economic liberalization.

"I want to get married and I need to find an apartment. I pick up the classifieds and there are lots of villas," said David Nabil, a 25-year-old DJ who makes 900 pounds a month, putting him in the low income bracket.

Nabil has been hunting for a flat for three years but has been priced out. His best find so far was in Sharabiya, a poor district of Cairo, but even there, the apartment was selling for close to 200,000 pounds or about $35,000, way out of his budget.

"I won't lie to you, our country has money and it has property, but it isn't for us," he said. 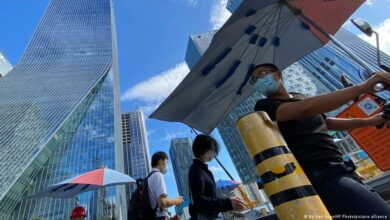