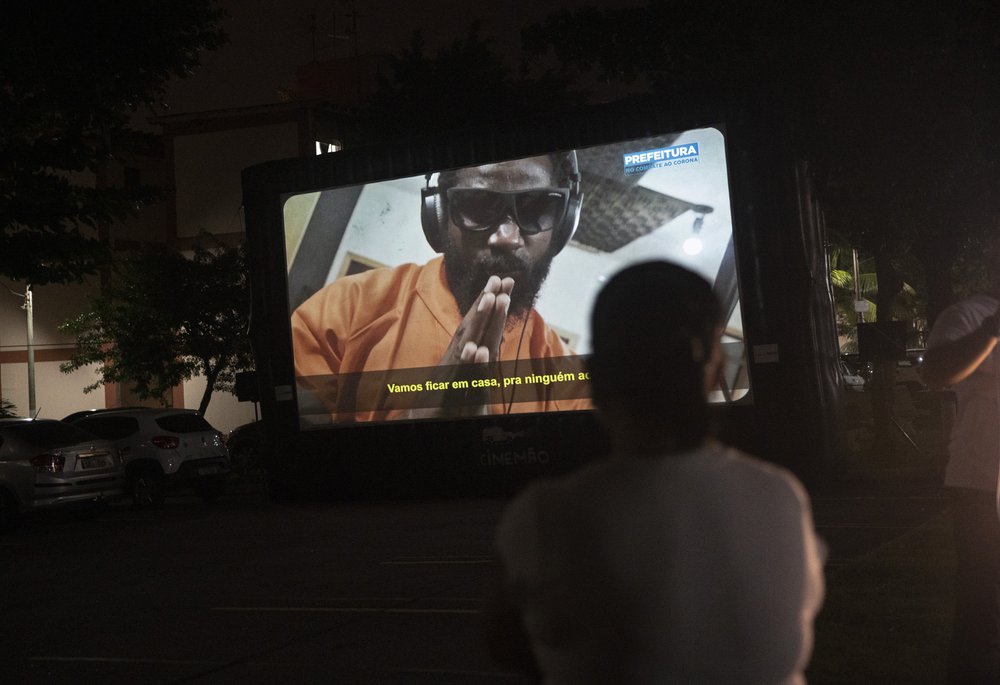 From outdoor kids’ movies for cooped up apartment dwellers in Rio to online shopping and worship around the globe, the coronavirus pandemic has communities adapting to the realities of living with a pandemic while battling to save their economies.

Japan was preparing to end its coronavirus state of emergency for most regions on Thursday, while New Zealand further relaxed its restrictions after deciding its outbreak is under control.

A strong typhoon was roaring toward the eastern Philippines as authorities struggled to evacuate tens of thousands of people safely during a virus lockdown. Governors said social distancing would be nearly impossible for those in emergency shelters, some of which had been turned into quarantine facilities.

It could be weeks before it’s clear whether reopenings will cause a spike in COVID-19 cases. The trajectory of outbreaks vary wildly, with steep increases in cases in some places, decreases in others and infection rates that can shift dramatically from neighborhood to neighborhood.

So, in many parts of the world, communities and individuals are finding inventive ways to cope with what many view as a “new normal.”

Apartment dwellers in Rio de Janeiro were getting some much needed entertainment from children’s movies projected onto screens set up outside their buildings, similar to a drive-in theater.

Cesar Miranda Ribeiro, president of city-owned RioFilme company, said the effort called “Cinema in the Windows” is aimed at “trying to take care of the mental health of the people.”

Chinese looking for some stay-at-home retail therapy have tuned into livestream shopping.

Others seeking spiritual support and human connections are worshipping remotely via online religious services from the Vatican to village churches, to mosques and temples.

“People in general, I think, are looking for more meaning and spirituality in the midst of all this,” said Omar Suleiman, an Islamic leader in Irving, Texas, whose Yaqeen Institute for Islamic Research has been uploading YouTube videos. “So I think there’s just a general increase in religiosity and consumption of religious content.”

For most leaders, though, the focus was a far more worldly one: how to get back to business and revive economies reeling from record numbers of job losses and chilling uncertainty.

Japanese Prime Minister Shinzo was due to hold a news conference to explain plans to lift the country’s state of emergency in most places ahead of schedule as the number of new cases falls, with the exception of Tokyo and several other high-risk areas.

So far, Japan, with a population of 126 million, has reported 16,000 confirmed cases of coronavirus and about 680 deaths.

The US has the largest coronavirus outbreak in the world by far: 1.39 million infections and over 84,000 deaths, according to a tally by Johns Hopkins University. Worldwide, the virus has infected more than 4.3 million people and killed some 297,000. Experts say the actual numbers are likely far higher.

A top US immunologist who says he lost his government job because he warned the Trump administration to prepare for the coronavirus pandemic said he was ready to tell Congress that America faces its “darkest winter in modern history” unless leaders act decisively to prevent a rebound of the coronavirus.

Dr. Rick Bright’s testimony due Thursday follows this week’s warning by Dr. Anthony Fauci, the government’s top infectious disease expert, that rushing to lift store-closing and stay-at-home restrictions could “turn back the clock,” seeding more suffering and death and complicating efforts to get the economy rolling again.

But the pressure is on to staunch job losses after the US unemployment rate soared to 14.7 percent in April, the highest since the Great Depression.

With roughly 30 million Americans out of work, Federal Reserve Chair Jerome Powell urged Congress and the White House to act further to prevent long-lasting harm. More government spending and tax breaks will be “worth it if it helps avoid long-term economic damage and leaves us with a stronger recovery,” Powell said.

He spoke a day after Democratic leaders proposed a three trillion dollar aid package for state and local governments, households and health care workers. That would follow nearly three trillion dollars in earlier financial assistance. The Fed, for its part, has cut interest rates to near zero and created numerous emergency lending programs.

Some states started easing their lockdowns about two weeks ago, allowing reopenings by establishments ranging from shopping malls in Texas to beach hotels in South Carolina to gyms, bars and restaurants in sparsely populated Wyoming, which has had relatively few cases.

It can take three to five days for someone newly infected, and possibly infectious, with the coronavirus to feel sick. Some infected people won’t even have symptoms. With testing often limited to those with symptoms, it may be five to six weeks before the effects of relaxing shutdowns are known, said Crystal Watson of the Johns Hopkins Center for Health Security.

“As we saw early in the year, epidemics of COVID-19 start slow and take some time to build and become evident,” Watson said in an email.

An Associated Press analysis of confirmed cases found steep increases in daily new cases in Hennepin County in Minnesota and Fairfax County, Virginia. In others, such as Bergen County, New Jersey, and Wayne County, Michigan, there’s been a steady decline.

The push for more testing is near universal: After discovering a handful of new infections, authorities in the Chinese city of Wuhan, where the pandemic first began late last year, are pressing ahead to test all 11 million residents for the virus within 10 days.

South Korea was testing hundreds of people as it battles a spike in infections linked to nightlife spots in Seoul that threaten the country’s hard-won progress in the fight against the pandemic. It confirmed 29 more coronavirus cases over the past 24 hours.

Italy partially lifted lockdown restrictions last week only to see a big jump in confirmed coronavirus cases in its hardest-hit region. Lebanese authorities reinstated a nationwide lockdown for four days beginning Wednesday night after a surge in reported infections and complaints that social distancing rules were being ignored.

In Geneva, meanwhile, a top World Health Organization official warned that it’s possible the new coronavirus may be here to stay since without a vaccine it could take years for the global population to build up sufficient levels of immunity.

“This virus may never go away,” Dr. Michael Ryan said.

Image: A woman watches a short film on a giant screen in Rio de Janeiro, Brazil, Wednesday, May 13, 2020. Cinema from the windows is the name of a Rio City Hall initiative to bring the movie theater to people in quarantine at home due to the coronavirus pandemic. (AP Photo/Silvia Izquierdo)

Virus hope in US as WHO hails global progress