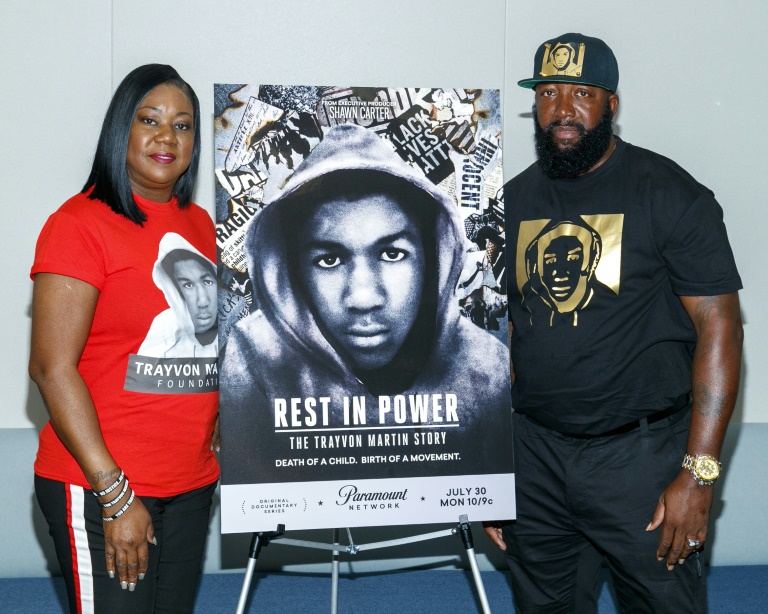 The killing of Trayvon Martin, a black teenager who went to a Florida store for Skittles but was shot dead by a neighborhood watch volunteer, inflamed the United States in 2012.

Six years later, a new television series is reliving what happened and forcing viewers to confront the gut-wrenching agony of losing a child in what Trayvon’s parents and the filmmakers hope will enact change.

“Rest in Power: The Trayvon Martin Story” premiered on the Paramount Network and BET on Monday, a docu-series bankrolled in part by rap mogul Jay Z and due to run in six weekly installments.

It crystallizes human loss — showing up close Trayvon’s mother Sybrina Fulton being forced to choose between grief and fighting for justice.

The viewer sees father Tracy Martin recalling a nine-year-old Trayvon saving him from a burning kitchen but heartbroken at not being able to protect his 17-year-old son in a gated Florida community.

“I want people to use what happened with Trayvon as an example — that you need to get busy now,” Fulton told a screening in Harlem.

“Don’t wait until something happens to your child or to your loved one in order to say, ‘Ok, I need to do something.'”

The series interlaces America’s ongoing racism problem with the debate about gun control and how the powerful National Rifle Association has lobbied to make guns easier to buy and shoot.

It explores the family’s quest for justice, how shooter George Zimmerman became a far-right hero and draws a line from Trayvon’s shooting to the emergence of the Black Lives Matter movement and the so-called “white lash” that influenced the 2016 election of President Donald Trump.

“We opened up Pandora’s Box and I had no idea what was going to happen,” says Tracy at the end of the first episode, after a clip of Trump shouting his campaign promise “We will make America great again.”

Reviews have been positive. The Guardian called it a “triumph,” that examines racial injustice “with skill and packs an almighty punch.”

“There is no way around the heartbreak and pain here, and that’s likely the point,” wrote the Los Angeles Times.

Trayvon died in Sanford, a town with a history of racism where Zimmerman called police repeatedly about black people and the Ku Klux Klan had black baseball hero Jackie Robinson kicked off the field in 1946.

“This is as old as the country, and the type of hatred and violence and murder that’s taken place in Sanford is emblematic of America’s story,” co-director Jenner Furst told the audience in Harlem.

Video footage shows Zimmerman telling police that Trayvon threatened to kill him, before being allowed to go home, and the relaying of a 911 call on which Trayvon’s parents heard their son screaming “help.”

Zimmerman’s claim of self-defense meant that he was not arrested, forcing Trayvon’s family into the hands of civil rights lawyers who jettisoned the case into the national limelight.

Florida’s “stand your ground” law, passed by Republican governor Jeb Bush in 2005, allows people in the state to use lethal force to defend themselves if they felt their lives were under threat.

Zimmerman was ultimately acquitted of second-degree murder by a jury.

Markeis McGlockton was shot dead earlier this month in Clearwater, Florida after a dispute over a handicapped parking space. The shooter was not charged under the stand your ground law.

Since Trayvon’s death, a series of unarmed black men have been killed at the hands of police officers, provoking nationwide protests and soul-searching about institutional racism and police brutality.

The series comes from the same team behind “Time: The Kalief Browder Story” about a black teenager who spent three years in jail awaiting trial for allegedly stealing a backpack. In 2015, he committed suicide.

“These injustices happen every day… America’s sort of grown numb to all of this,” said executive producer Chachi Senior.

“The hope really is that America watches this, looks at itself, reflects and hopefully changes for the better in some capacity.”

Beyoncé to police: 'Stop killing us'