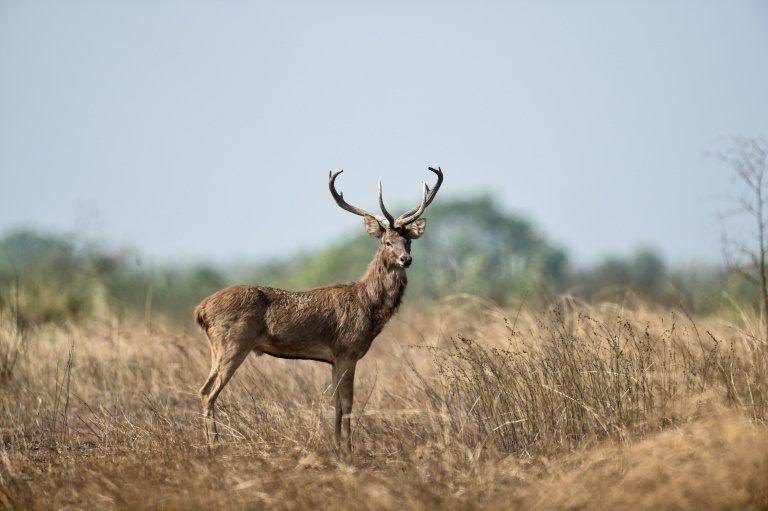 A herd of endangered deer wait under the shade of one of the sparse trees in this parched central Myanmar landscape, watching as rangers dispatch drinking water — a life-saving resource funded by well-wishers across the country.

Shwe Settaw nature reserve in Magway Division is home to the endemic species of Eld’s or golden deer. But their habitat lies in the country’s central dry zone, a low-lying plain astride the Irrawaddy River where water shortages are rife in the hot season.

This year temperatures have soared to a record 47 degrees centigrade.

The sanctuary’s 20-odd lakes and ponds — a lifeline for the deer, wild boar, jackals, peacocks and other creatures — have all dried up.

In one lake bed, a water depth-measuring rod stands marooned in the middle of a mosaic of cracked, arid earth.

Many of the park’s estimated 1,000 deer started venturing dangerously close to villages outside the reserve, putting themselves at risk of poaching, rangers say.

At the end of April, the park’s dozen rangers started pooling their money to travel to a nearby river to collect water and re-fill a couple of the scorched craters.

But after realizing this was unsustainable they turned to Facebook for help.

Donations poured in from as far away as Yangon, Mandalay and Shan state in the northeast.

“Luckily, it really captured people’s interest,” ranger Thein Lwin tells AFP with a smile, adding that within a few days they had received over 1 million kyat ($650).

The sum is enough to pay for the petrol and fees needed to hire water-carrying tankers that take six daily trips to a small river some 15 kilometers away. Each tanker holds around 4,500 liters of water.

They have even stopped accepting money on the assumption the fund will see them through to the monsoon season in the coming weeks.

In another section of the reserve, a breeding program for the critically endangered Burmese star tortoise faces similar problems.

“We lost some tortoises because of the extreme heat,” says Steve Platt, a herpetologist with the World Conservation Society (WCS).

“That doesn’t happen every year. Three or four — we just found them dead,” he says.

But the plight of the park’s fauna will not end when the rains arrive.

The sanctuary is the centre of an ongoing conflict between conservationists and local people, some of Myanmar’s poorest.

AFP / Ye Aung THU Poaching is a huge problem in Myanmar, where the illegal trade of wildlife parts flourishes

Around 40 villages lie close to the reserve — most without electricity — and many people enter to search for firewood.

Poaching is also a huge problem in a country where the illegal trade of wildlife parts flourishes, due largely to the insatiable appetite from neighboring China.

“We need more guard posts and more staff,” the ranger says with a sigh. “The deer’s future is at stake.”

Rains like no other: Iraq is tested in era of climate change