Ambulance sirens and the sound of an occasional gunshot in the background cannot break the determined, measured cadence of Abdallah Omar Abdel Rahman, the son of the man convicted of helping coordinate the 1993 World Trade Center bombing and one of the leaders of a Cairo sit-in aiming to have him freed.

“Everyone has come to know the heroism of this man and the truth, which was concealed by the corrupt Mubarak regime,” he says.

The protest for the release of Abdallah's father, Sheikh Omar Abdel Rahman — known as “the Blind Sheikh” — could not seem more out of place. Just a street over on Qasr al-Aini, a December protest outside the cabinet building has devolved into a street battle between protesters and unrestrained military and police forces, which ultimately left 17 dead and hundreds injured. But at the sit-in, located just a few hundred feet from the US Embassy in Cairo, five men sit down for a serene picnic.

Supporters held their first protest for Abdel Rahman's release on 21 April, and on 13 August, they began an open-ended sit-in that has continued uninterrupted for roughly five months since.

“We told all of the security forces in Egypt, there are only two ways we leave this place: We are killed or Sheikh Omar Abdel Rahman is returned,” says Hagag al-Shimy, a brother-in-law of the sheikh.

Like many causes in revolutionary Egypt, the protest has since left the wider public's consciousness. Shimy's voice rises when he speaks about how young people nonchalantly walk by their protest, though he maintains that he is “not angry” with them.

“They don't do anything to free Omar Abdel Rahman. They don't care about the problem,” he complains.

Abdel Rahman's supporters have launched a full-fledged public campaign aimed at Egypt's revolutionary youth, as well as the US government and President Barack Obama. Their street corner is bedecked with posters featuring their demands and direct appeals to the American government. One sign reads, “To the American gov./Why insisting on getting Muslims hate?” Another: “SMS .. to OBAMA/Sincerity of Intentions with Egyptians/Freedom for OMAR ABD EL-RAHMAN.”

One protester asked this reporter to email Obama to request Abdel Rahman's release.

The protesters invited outsiders — journalists, embassy workers and curious onlookers — to sit down with them on the rugs they have laid out on the street. These encounters are invariably friendly, accompanied by tea and well-timed meals.

“I am not at all frustrated,” says Abdallah, when asked if he had expected more progress up until now. “The long period for the protest has enabled us to improve the sheikh's publicity, and correct his bad image.”

But with the sit-in approaching the half-year mark, frustration seems to be pushing some protesters to consider alternative solutions.

“[The Americans] are losing Egypt,” says Hesham al-Ashry, who used to preach alongside Abdel Rahman in New York City, of continued imprisonment of the sheikh by the US. “They turned people who were very good to them [Egyptians] to be the main source of danger against them.”

Ashry, who often attends the sit-in but met Egypt Independent in his downtown tailor shop, only sees two scenarios in which Abdel Rahman is released. The first is that the US decides to admit its mistake in imprisoning the sheikh and finds a “nice-looking way” to let him out.

“The other way is, kidnap some Americans, slaughter some of them, if it's important, and have American people in danger. Then America will say, ‘Sorry, here is the imam.’ Unfortunately, this is the way America listens.”

Abdel Rahman is seen as the spiritual leader of Jama'a al-Islamiya, which the European Union, the US and Egyptian governments have considered a terrorist organization ever since its deadly campaign against tourists in Egypt in the 1990s. After members of the group killed 58 foreign tourists and four Egyptians at the Temple of Hatshepsut in Luxor in November 1997, they placed leaflets inside some of the victims' gutted bodies that demanded the sheikh’s release.

Ashry is not a member of Jama'a al-Islamiya, but he's aware of how easily his words can fit into a facile narrative of bloodthirsty Islamists seeking to destroy the West.

“Of course I don't want [such an attack to happen],” he explains. “But now you have the family protesting for almost a year now, so the American government is pushing people to do it.”

Abdallah insists that he and the other protesters — almost all of whom are members of Jama'a al-Islamiya — “completely, completely” disagree with Ashry's assessment. While certain elements try to promote the idea that the protesters think this way, he says, Abdallah and the others are determined to remain peaceful.

“Islam is against actions such as kidnappings,” he emphasizes.

Jama'a al-Islamiya today officially renounces violence and ran a candidate under the Construction and Development Party in the parliamentary elections. Abdel Rahman, from his prison in the US, reportedly blessed a nonviolence initiative signed between Jama'a al-Islamiya and the Egyptian government, though he later retracted his support.

Confusion over the sit-in's goals will likely persist — and increase — as the demonstration protracts. Even when the sit-in was only about a month old in September, Shimy and another Abdel Rahman supporter openly disagreed over whether they seek the sheikh’s transfer to an Egyptian prison or his outright release.

In October, during negotiations for a prisoner swap between Israel and Egypt that involved a dual Israeli-American national, local media reported that Abdel Rahman's supporters tried to include the sheikh in the deal. They were unsuccessful.

'Man of the century'

The sit-in’s lasting power is largely attributable to the personality of Sheikh Omar Abdel Rahman, whose resolute stance against the US and the former Mubarak regime have formed a quasi-cult of personality around him.

“Sheikh Omar Abdel Rahman is the man of the century!” Shimy exclaims after listing another of the sheikh's many accomplishments.

Possessing a doctorate in Islamic Sharia law and remarkable skill at the pulpit, Abdel Rahman began in the 1980s to recruit young Egyptian men to go fight alongside the mujahideen to expel the Russians from Afghanistan. In 1990, he moved to Brooklyn, New York, where he continued to recruit mujahideen as imam of the Farouq mosque.

He even sent his two oldest sons, Ahmed and Mohamed, to fight in Afghanistan. Ahmed was killed in Afghanistan by a US drone strike in October, and Mohamed is a regular attendee of the embassy sit-in.

Abdel Rahman soon became known around the US — and eventually by law enforcement — for his forceful screeds against the American government, particularly what he saw as its oppressive policies in the Muslim world.

He was arrested by the FBI in 1993, a few months after the World Trade Center bombing which killed six and injured more than a thousand. Choosing to defend himself in court, Abdel Rahman was unable to overturn the FBI's mountain of evidence alleging his involvement. He was convicted in October 1995 of seditious conspiracy for both that bombing, as well as a plot to bomb New York landmarks and assassinate American politicians, and sentenced to life in prison.

“It was a surprise for me that the country that I came to, to stay and show the world … about the oppression we are facing [in Egypt], was the one that oppressed me, and put me in jail, and threw all these accusations against me,” said Abdel Rahman in a 1995 interview from his prison cell.

Over 15 years later, Abdel Rahman's son Abdallah is a perfect mimic of his father.

“Sheikh Omar went to America because he loves America, and considers it a tribune for freedom,” he says, noting that he is now afraid to travel to the US. “This is what makes us astonished at his imprisonment.”

When asked in October about the possibility of Abdel Rahman being released as part of the Egypt-Israel prisoner swap, US Ambassador Anne Patterson responded bluntly.

“No, he will be not released, except under provisions of US law that would provide for his release,” she said at the time. Contacted for comment, the US Embassy press department says its stance on Abdel Rahman has not changed since the protest first began, and refers to the ambassador's statement on its website.

Abdel Rahman's supporters still feel that his release is possible, but they don't seem to have any plan for achieving it. Abdallah says he has no intention to escalate the protest.

“It's not about that,” he says. “The protest is not meant to annoy the people in the embassy, but rather to promote our cause.”

In the middle of his late afternoon sermon, Abdallah asks God to release his father from captivity. When the prayer is finished, the protest continues — which for now involves a few men ambling off and others lying down to relax. No one seems in any particular hurry as the water begins boiling for tea.

A previous version of this story incorrectly stated that Abdel Rahman is an American citizen. His citizenship status remains unclear. 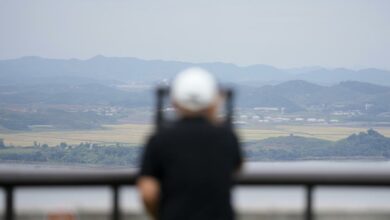