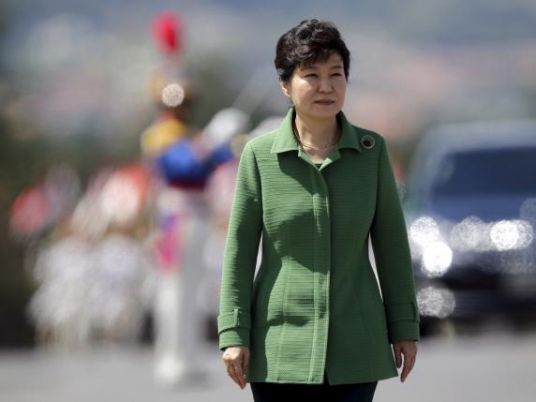 North Korean leader Kim Jong Un appeared on Thursday to claim the country has developed a hydrogen bomb, a step up from the less powerful atomic bomb, but outside experts were skeptical.
Kim made the comments as he toured the Phyongchon Revolutionary Site, which marks the feats of his father who died in 2011 and his grandfather, state founder and eternal president, Kim Il Sung, the official KCNA news agency said.
The work of Kim Il Sung "turned the DPRK into a powerful nuclear weapons state ready to detonate a self-reliant A-bomb and H-bomb to reliably defend its sovereignty and the dignity of the nation," KCNA quoted Kim Jong Un as saying.
DPRK is the acronym for the isolated North's official name, the Democratic People's Republic of Korea. A hydrogen bomb, also known as a thermonuclear bomb, uses more advanced technology to produce a significantly more powerful blast than an atomic bomb.
North Korea conducted underground tests to set off nuclear devices in 2006, 2009 and 2013, for which it has been subject to UN Security Council sanctions banning trade and financing activities that aid its weapons program.
An official at South Korea's intelligence agency told Yonhap news agency that there was no evidence that the North had hydrogen bomb capacity, and believed Kim was speaking rhetorically.
Impoverished North Korea and rich, democratic South Korea remain technically at war after their 1950-53 conflict ended in a truce, not a treaty. The North has threatened to destroy the South and its major ally, the United States, in a sea of flames.
Despite the underground tests, the North has been seen as short of achieving the capability to put a nuclear warhead on a missile. If the hydrogen bomb claim is true, it would indicate advances in the North's pursuit of nuclear weapons.
"I think it's unlikely that they have an H-bomb at the moment, but I don't expect them to keep testing basic devices indefinitely, either," said Jeffrey Lewis of the California-based Middlebury Institute of International Studies at Monterey.
It was possible the North was referring to the technology of boosting the yield of a nuclear device, possibly using fusion fuel, Lewis said.
North Korea claimed in 2010 that it had successfully developed fusion technology.
Assessing progress in the North's nuclear program is difficult because no one outside a close circle of leaders and experts in Pyongyang knows what advances have been made.
The North has also boasted to have succeeded in miniaturization of a nuclear warhead to mount on a ballistic missile, a claim disputed by US and South Korean experts.