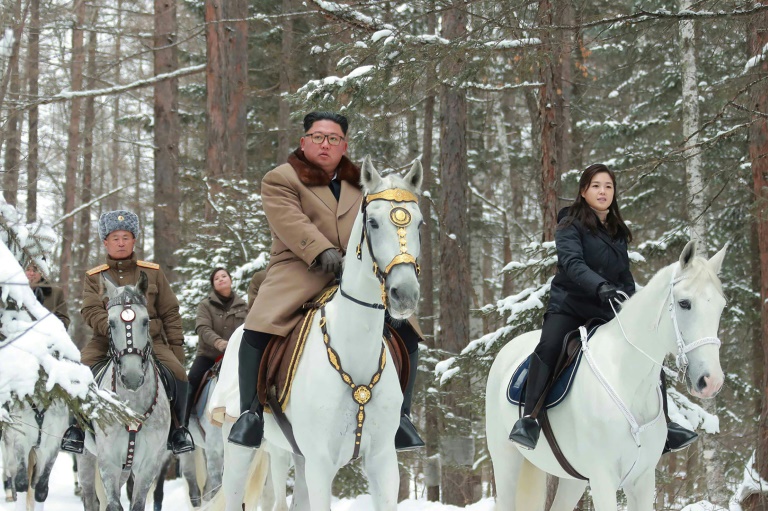 The photos come as nuclear talks with the United States are stalled and with a looming end-of-year deadline set by North Korea for some kind of concession from Washington.

Kim — in a black leather trenchcoat he has worn recently to open a flagship construction project and supervise a weapons test — was pictured leading a squad of riders in a white forest near Mount Paektu.

The group included his wife Ri Sol Ju as well as several officials, the images released by the official KCNA news agency showed.

The mountain — a dormant volcano on the border with China — has great symbolic significance in the North as both the spiritual birthplace of the Korean nation and, according to Pyongyang’s orthodoxy, the birthplace of Kim’s father Kim Jong Il.

The agency also released new images of Kim in a light brown coat with fur collar at the summit of the mountain, to which he previously rode in October.

Analysts say that pictures of Kim at Mount Paektu — a physically dramatic location that is ubiquitous in North Korean imagery — represent assertions of leadership and legitimacy, given the historical background.

According to Pyongyang’s propaganda, his father was born at a secret camp in the area, where his own father, the North’s founder Kim Il Sung, was fighting Korea’s Japanese colonial occupiers.

According to independent historians and Soviet records, however, Kim Jong Il was born in Russia, where his father was in exile.

Kim tends to visit once or twice a year, trips that are sometimes seen as indicators of policy changes.

He went to the area in November 2013, ahead of his purge and execution of his once-powerful uncle Jang Song-thaek.

And he climbed the mountain in December 2017 shortly before the diplomatic rapprochement that led to his Singapore summit with Donald Trump — the first between leaders of the North and the US.

Earlier this week, Kim opened a huge development project in nearby Samjiyon, involving the reconstruction of an entire town that Pyongyang portrays as a demonstration of resilience in the face of sanctions imposed on it over its nuclear and ballistic missile programmes.

The ceremony and Kim’s horse ride come with time running out on the North’s demand for the US to offer it fresh concessions by the end of the year, and ahead of Kim’s New Year speech on January 1, a key political set-piece in the isolated country.

Negotiations between Pyongyang and Washington have been deadlocked since the Hanoi summit broke up in February, and the North has issued a series of increasingly assertive comments in recent weeks as its time limit approaches.

Earlier this week, KCNA quoted vice foreign minister Ri Thae Song as saying: “What gift the US receives for Christmas depends entirely on the US’ decision.”

And on Wednesday it reported that the ruling Workers’ Party of Korea will hold a full meeting of its central committee later this month “to discuss and decide on crucial issues in line with the needs of the development of the Korean revolution and the changed situation at home and abroad”.

“Leather has long symbolized bulletproof resistance in the North,” he told AFP.

References to Kim Il Sung’s anti-Japanese struggle were a message to the domestic audience that “his descendant Kim Jong Un is capable of doing the same, this time against the US”, he added.

“One of the possible scenarios is for Pyongyang to completely side with Beijing.”

Image: KCNA VIA KNS/AFP / STR Mt Paektu has great symbolic significance in the North as both the spiritual birthplace of the Korean nation and, according to Pyongyang’s orthodoxy, the birthplace of Kim’s father Kim Jong Il