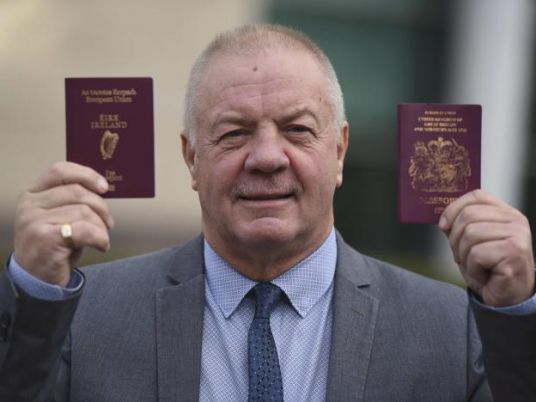 Northern Ireland's High Court on Friday rejected an attempt to block Britain's exit from the European Union, saying that neither the province's parliament nor its laws could override a decision by the British government.

But it said it would defer to English courts on the wider issue of whether the British government has the right to invoke Article 50 of the EU Lisbon Treaty to leave the bloc without the explicit backing of the British parliament.

Prime Minister Theresa May welcomed the ruling, with a spokesman saying it would allow the British government "to proceed to trigger Article 50 as planned".

One of the plaintiffs, human rights activist Raymond McCord, said he would appeal against the ruling in the Supreme Court, Britain's highest judicial body.

The case is the first judgment in legal disputes over Brexit that are being closely watched by politicians and markets. It comes amid political tension among the four nations of the United Kingdom – England and Wales, which voted to leave the EU, and Northern Ireland and Scotland, which voted to remain.

A case in London will rule on whether May can use the government's "royal prerogative" power to trigger Article 50 without consulting parliament.

"The fact that the government has won in the Northern Ireland case could be seen to indicate that its prerogative power is holding up pretty well," said Stephen Tierney, director of the Edinburgh Centre for Constitutional Law.

"I would personally be surprised if the High Court in England reached a different conclusion," he said.

Scotland's pro-independence government said it did not believe the court ruling gave any clear pointers to its own situation.

"We are considering the judgment, but it must be noted that this case examined the specifics of the situation in Northern Ireland and therefore has no automatic implications for Scotland," a spokesman for the Scottish government said.

Sterling fell to an eight-day low against the euro after the ruling.

Overall, 52 percent of the United Kingdom voted in favor of leaving the EU in June's referendum, but 56 percent of those voting in Northern Ireland backed remaining in the bloc.

There are fears that Brexit could undermine a 1998 peace deal, the Good Friday Agreement, which ended three decades of bloodshed in the province, and could lead to the reintroduction of unpopular controls on the border with the Republic of Ireland, an EU member.

But justice Paul Maguire said it was "not viable" that Northern Ireland should overrule the 52 percent of the United Kingdom as a whole that voted in favor of leaving.

The regional parliament would have a say on legislation passed to enact Britain's exit, but the triggering of Article 50 itself was not a "devolved matter".

"The UK Parliament has retained to itself the ability to legislate for NI without the need to resort to any special procedure," Maguire said.

The arguments about May's rights to trigger Article 50 "have been held over pending the outcome of the English litigation", he added.

Rights activist McCord told reporters that the ruling was just a setback and he would continue to fight Brexit.

"I believe what we are doing is correct. Fifty-six percent of the people of this country (Northern Ireland) voted to remain."

A group of politicians and rights groups who launched a parallel case that was merged with McCord's said they were "deeply disappointed" by the rejection of their case, but had not yet decided whether to appeal.

Northern Ireland's largest Irish nationalist party, Sinn Fein, said it would study the judgment carefully and explore every option to ensure the remain vote was respected.

That chimes with the stance of the devolved Scottish government, which is trying to drum up support to keep its membership of the EU's single market for goods and services.

First Minister Nicola Sturgeon has said it would be an act of "constitutional vandalism" to try to ignore Scotland’s voice.

"The First Minister has made clear that any proposal to remove Scotland from the EU would need legislation at Westminster, and that legislation would require the consent of the Scottish Parliament," a Scottish government spokesman said.

Her party has drawn up draft legislation on a second referendum on independence from the UK, which it says is an option to protect Scotland’s position within the EU.