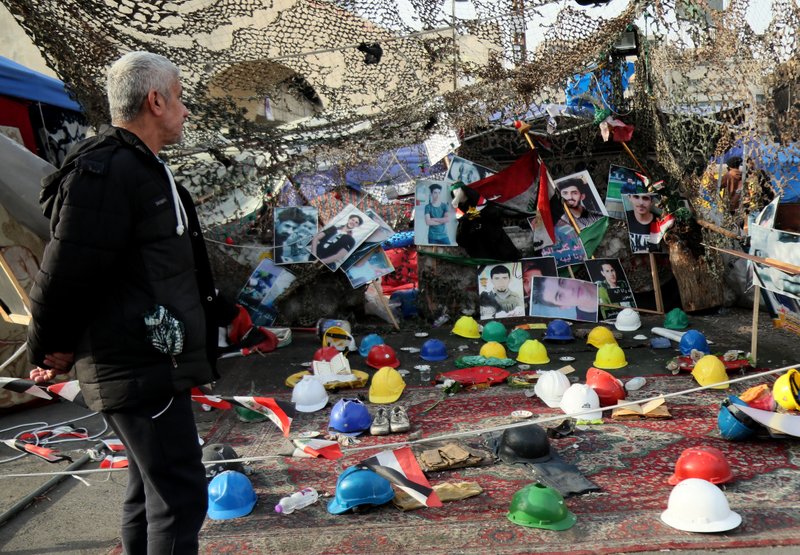 BAGHDAD (AP) — Two protesters were killed and over a dozen wounded in central Baghdad on Friday in renewed violence between anti-government demonstrators and Iraqi security forces, activists and officials said. The deaths followed weeks of calm.

Two protesters were killed and at least 20 wounded, three activists and a security official said. The officials spoke on condition of anonymity in line with regulations.

Friday’s violence breaks a period of calm between protesters and security after tensions soared between Tehran and Washington following a US drone strike that killed a top Iranian general. Both countries showed signs of de-escalation after Iran retaliated by attacking two military Iraqi bases hosting American troops without causing fatalities.

Mass protests engulfed Baghdad and the predominately Shiite southern provinces on Oct. 1, when thousands of Iraqis took to the streets to decry rampant government corruption, scarcity of jobs and poor basic services. At least 500 have died at the hands of security forces who have fired live ammunition, tear gas and sound bombs over the course of the four-month protest movement.

Since November, protesters have occupied three strategic bridges in Baghdad — Sinak, Ahrar and Jumhunriyah — leading to or near the fortified Green Zone, the seat of Iraq’s government, in a standoff with security forces.

In an attempt to bring back focus to the goals of the protest movement, anti-government protesters in the southern city of Nasiriyah gave the government a week’s deadline to take serious steps to implement changes. The deadline runs out early next week.

The movement has been successful in bringing about key changes, but it remains to be seen whether protesters can keep up the momentum amid regional tensions and political infighting.

Political factions have yet to reach a consensus on a new candidate to replace Abdul-Mahdi.

In late December, Parliament approved a new election law aimed at giving political independents a better chance of winning seats, a key demand of protesters. Once implemented, the new law would change each of the country’s 18 provinces into several electoral districts, with one legislator elected per 100,000 people.

But protest organizers have struggled in recent weeks to bring large crowds to Tahrir Square, the epicenter of the movement, sparking fears the movement might be losing momentum.

By SAMYA KULLAB and QASSEM ABDUL-ZAHRA

Image: Posters of protesters who have been killed in anti-government demonstrations and their belongings are displayed in Tahrir Square, in Baghdad, Iraq, Friday, Jan. 17, 2020. (AP Photo/Hadi Mizban)

Push to oust US troops from Iraq a risky undertaking