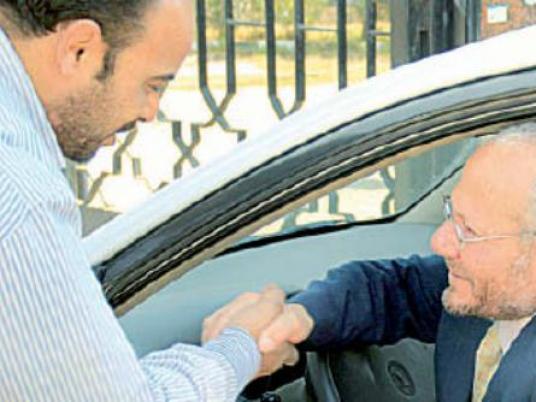 Sheikh Shawky Ibrahim is due to begin his tenure as grand mufti in March, when the term of the current Grand Mufti Ali Gomaa draws to a close.

Ibrahim’s election a fortnight ago by the Supreme Council of Scholars has been approved by President Mohamed Morsy, who is likely to give it the go-ahead.

The change in leadership comes at a critical time, when growing political polarization has challenged the rule of Morsy and the Muslim Brotherhood’s political arm, from which he hails.

But, more than a political battle, the choice of Ibrahim, who keeps a relatively low profile, would seem to reflect a desire by the council to keep the post nonpartisan, amid growing concern over the politicization of the country’s top religious institutions.

A scholar of jurisprudence at Al-Azhar University in the northern city of Tanta, Ibrahim is a Sufi and is known among Al-Azhar circles for having no political affiliations.

The selection of a politically neutral figure has dispelled mounting concern after a wave of speculation pinpointed Brotherhood-affiliated Abdel Rahman al-Barr as the likely candidate for the post from among a list of 28.

Barr, however, did not make it to the final list of three candidates, which included Ibrahim along with two similarly nonpartisan scholars of Sharia and jurisprudence at Al-Azhar University.

Some foresaw battles between moderates and hardliners within Al-Azhar as extending to Dar al-Ifta. Ibrahim’s appointment is perceived as a victory for a current in Al-Azhar led by Grand Sheikh Ahmed al-Tayyeb, reportedly engaged in a pseudo cold war against hardline religious groups.

For Sheikh Abdel Mo’aty Ibrahim, coordinator of the independent Azharis Without Borders group, says, “Selecting a politically apathetic scholar to head Dar al-Ifta is definitely a good move in that it avoids further politicization of the religious institution.”

The Supreme Council of Scholars was revived in January last year when the then-ruling military council passed a law stipulating that the council appoint both the mufti and Al-Azhar’s grand sheikh.

The military junta passed the law just days before the first post-uprising elected Parliament was seated. It stipulates that the Al-Azhar grand sheikh appoint the supreme council’s members, who are then entitled to elect the grand sheikh and the mufti, as well as to make decisions on all issues pertaining to the institution.

Islamist parties who had enjoyed a majority in the now dissolved Parliament had heavily criticized the way in which the law was passed, but failed to further challenge the decisive legislation.

Gomaa, also a Sufi, is known to be highly critical of the ruling Brotherhood, as well as the increasingly prevalent Salafi school of thought in some religious state institutions.

But the political positions of religious leaders and the implication of religious institutions in political conflicts have been increasingly disconcerting for many.

Many have criticized the leadership of religious institutions for playing politics and neglecting their primary role in society. Ibrahim says mainstream Egyptians are eagerly waiting for Al-Azhar scholars to reclaim their role in mosques, as well as their everyday lives.

According to Dar al-Ifta’s website, it is “the premier institution representing Islam and the global flagship for Islamic legal research.” At times, it plays a part in the judicial process, being the institution to which verdicts entailing capital punishment are referred for the grand mufti’s final approval.

Amid the current state of polarization, however, religious institutions have found themselves caught in the middle of two currents: an increasingly hardline Islamist one, and another that is more moderate. The dichotomy is highly reflective of the political landscape.

As it plays out internally, the struggle threatens the very credibility of these historic institutions. And while the rift is initially born inside Al-Azhar, its extention to Dar al-Ifta may have its repercussions given the latter’s significant social position in granting religious advice.

Nathan Brown, a professor of political science and international affairs at George Washington University who writes extensively about Al-Azhar, says the battle between the two currents will have long-lasting repercussions.

While the more liberal and politicized current led by Tayyeb is primarily centralized in the institution’s top leadership, the Brotherhood and Salafis have a strong base among young scholars and mainstream Al-Azhar students, Brown says.

Ibrahim strongly agrees. “Brotherhood supporters control most of the student body within Al-Azhar University, [so much so that] it is difficult for students affiliated with other currents to find a place within the community,” he says.

He goes further to claim that many student activities and groups are not given permission to operate if they are not Brotherhood-affiliated.

Ibrahim, whose group has been highly critical of both the military regime and the Brotherhood, says the popularity of the latter within Al-Azhar University is a reaction to the connection between the institution’s top leadership and the former regime.

During the 25 January uprising, Gomaa called upon Egyptians not to participate in the mass protests, which he said were engineered to destabilize the country.

The revolution’s supporters have since drawn connections between the former regime and Gomaa, as well as other prominent scholars in religious institutions.

Worst off in this regard was Tayyeb, whose membership in the formerly ruling National Democratic Party compromised his position.

“Tayyeb and his current have lost their credibility within Al-Azhar, even within circles of the non-politicized students. It is difficult for him to gain any level of support since he used to be an NDP member,” Ibrahim says.

Meanwhile, he adds, “The Brotherhood knows how to use this fact to their advantage.”

“Al-Azhar and Dar al-Ifta should not be controlled by politicized currents. The Shias who established Al-Azhar in the first place could not do this, and the Brotherhood cannot do this now,” Ibrahim adds.

He argues that the institution may soon be split between conflicting currents, especially as this politicization was cemented in the newly passed Constitution.

Article 4 of the Constitution stipulates that Al-Azhar be consulted in all legislation pertaining to Sharia, a role seen by many as granting Egypt’s highest religious institution broad legal and political powers.

Brown argues that if the Supreme Council of Scholars starts to spark the ire of the Brotherhood, the ruling group would likely consider amendments to the law, particularly given that many are already calling for an end to the grand sheikh’s control over the council’s formation, arguing that membership should be chosen through elections instead.

Brown, however, says it is crucial not to give the internal competition between the two currents more prominence than it deserves.

“I do not see the current sheikh as a complete opponent of the Brotherhood. He certainly is different in approach, and I think there is not a lot of trust between him and the Brotherhood. But [Tayyeb] seems to be interested in protecting the institution and its role, and that may mean reaching some kind of modus vivendi with the presidency,” he says.

Al-Azhar’s strong positions with regard to a number of incidents may spell something different.

While Morsy warmly received Iranian president in Cairo two weeks ago, for example, Al-Azhar sent a strongly worded message to Mahmoud Ahmadinejad during a press conference after he visited Al-Azhar headquarters.

Al-Azhar asked Ahmadinejad to end discrimination against Arab and Sunni minorities in Iran, stop intervening in Bahrain and Syria, and halt attempts to spread Shia Islam to Sunni-majority countries.

In another incident, the Supreme Council of Scholars deemed the draft law on Islamic bonds as noncompliant with Sharia, impeding the Brotherhood’s plans to pass the law.

“Unfortunately, no matter what he does, Tayyeb’s attempts to preserve the image of Al-Azhar will fail because he does not enjoy credibility or support from the mainstream Azhar community,” Ibrahim says.

The solution, Ibrahim says, is to end Al-Azhar’s politicization by issuing another law that guarantees its independence, with neither the control of the state as the Brotherhood want, nor the tight grip of the Grand Sheikhs, as in the case of Tayyeb.

“This will never happen unless a new class of Azhar scholars emerges, a class that can retrieve that lost image of Azhar and restore its original role among the public,” Ibrahim says.

Brown argues that this class is already in the making.

“There are many conservatives who are neither supporters of [Tayyeb] or the [Brotherhood] but instead independent. My guess — and it is only a guess — is that they are the center of gravity of the institution,” he says.

This mainstream group of scholars, he adds, is growing increasingly frustrated with the politicization of Al-Azhar and its deteriorating role in society.

“Their attitude is that they are specialists with specialized knowledge, but also ones who develop that religious knowledge in ways that are responsive to the needs of the society,” Brown says. “They think Al-Azhar has been politicized and marginalized in a way that made people turn to the Brotherhood for answers, instead of to Al-Azhar, their traditional source.”