Orascom Constructions Industries said on Monday that the amount of taxes in dispute over the sale of Orascom Cement to the French company Lafarge, the largest cement producer in 2007, is LE4.7 billion (US$697.28 million.)

The company said in a statement made to the Egyptian exchange that it has not received any notifications on the reported news that its founder, Onsi Sawiris, and his son, company chairperson Nassef Sawiris, had been put on the travel ban list.

The source said the prosecutor general’s decision is related to Finance Minister Morsy Hegazy’s request that the two be questioned over their role in the sale, in which the government has accused the company of evading taxes on the profits from the 2008 transaction.

Officials have said the company evaded LE14 billion in taxes from the deal, which brought in an estimated profit of LE68 billion.

Orascom had sold its cement sector to the French company Lafarge in 2008 for $12 billion. The transaction was made through the Egyptian Exchange.

State-run news agency MENA had reported on Sunday that the prosecutor general decided to prevent both Onsi and Nassef Sawiris from leaving the country. 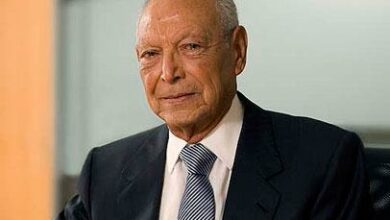