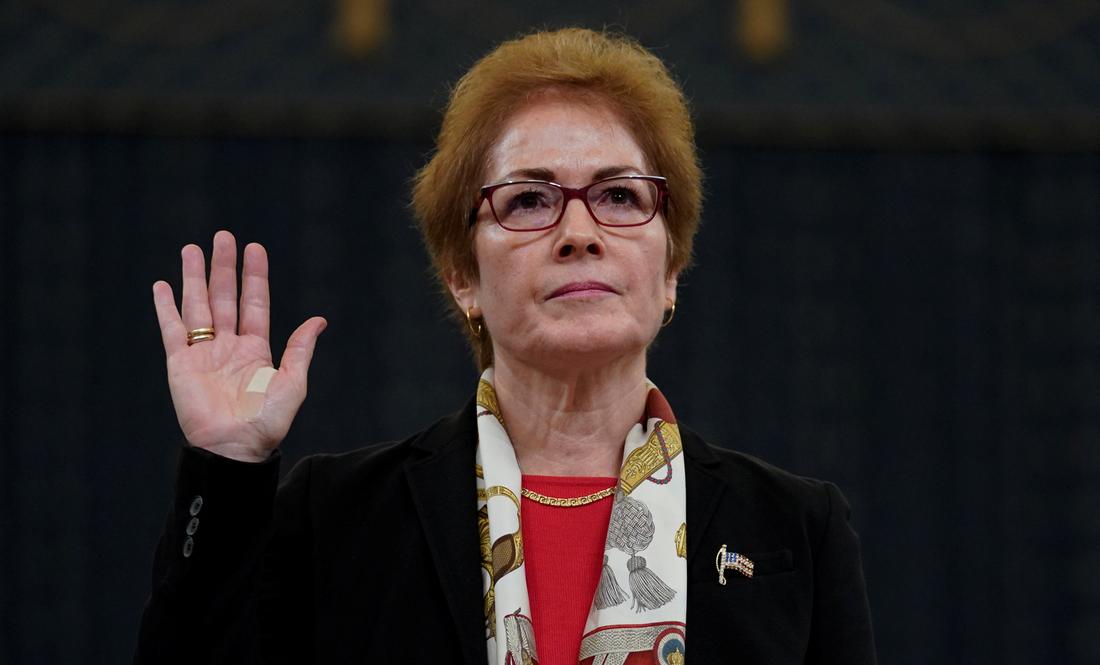 WASHINGTON (Reuters) — The former U.S. ambassador to Ukraine who was branded “bad news” by President Donald Trump and removed, defended her record and told a televised impeachment hearing on Friday she did not pursue a political agenda in Ukraine.

“I had no agenda other than to pursue our stated foreign policy goals,” the ambassador, Marie Yovanovitch, said in her opening statement on the second day of televised impeachment hearings in the U.S. House of Representatives.

The session before the House Intelligence Committee is part of the Democratic-led impeachment inquiry that threatens Trump’s presidency even as he seeks re-election in November 2020.

Yovanovitch was removed from her post as ambassador to Kiev in May after coming under attack by Trump’s personal lawyer, Rudy Giuliani, at a time when he was working to persuade Ukraine to carry out two investigations that would benefit the Republican president politically.

Giuliani was trying to engineer Ukrainian investigations of Democratic presidential contender Joe Biden and the former U.S. vice president’s son Hunter, who had served as a board member for Ukrainian energy company Burisma, as well as a debunked conspiracy theory embraced by some Trump allies that Ukraine, not Russia, interfered in the 2016 U.S. election.

The focus of the impeachment inquiry is a July 25 phone call in which Trump asked Ukrainian President Volodymyr Zelenskiy, who was elected in May, to open the investigations.

Democrats are looking into whether Trump abused his power by withholding $391 million in U.S. security aid to Ukraine as leverage to pressure Kiev. The money, approved by the U.S. Congress to help a U.S. ally combat Russia-backed separatists in the eastern part of the country, was later provided to Ukraine.

“Ambassador Yovanovitch was serving our nation’s interest in fighting corruption in Ukraine, but she was considered an obstacle to the furtherance of the president’s personal and political agenda. For that she was smeared and cast aside,” Democratic committee chairman Adam Schiff said in his opening statement.

“The powers of the presidency are immense, but they are not absolute and cannot be used for a corrupt purpose,” he said.

Trump has denied any wrongdoing and calls the impeachment probe a sham.

Republican Devin Nunes criticized Democrats for launching the impeachment inquiry, calling it a political exercise based on second- and third-hand hearsay.

“The problem with overthrowing a president based on this type of evidence is obvious. But that’s what their whole case relies on,” Nunes said in his opening statement.

Yovanovitch, who has worked for both Republican and Democratic administrations, told lawmakers behind closed doors on Oct. 11 that Trump ousted her based on “unfounded and false claims by people with clearly questionable motives” after she came under attack by Giuliani. She also denied allegations by Trump allies that she was disloyal to him and said she did not know what Giuliani’s motivations were for attacking her.

Trump called Yovanovitch “bad news” in the phone call to Zelenskiy and added that “she’s going to go through some things,” according to a White House summary of the call. Zelenskiy told Trump: “I agree with you 100 percent” that she was a “bad ambassador.”

In her private testimony to lawmakers, Yovanovitch also described how Gordon Sondland, the U.S. ambassador to the European Union, had urged her to use Twitter to express support for Trump to save her job. “He said, you know, you need to go big or go home. You need to, you know, tweet out there that you support the president,” she said.

Three more public hearings are scheduled for next week.

The hearings may pave the way for the Democratic-led House to approve articles of impeachment — formal charges — against Trump. That would lead to a trial in the Senate on whether to convict Trump and remove him from office. Republicans control the Senate and have shown little support for Trump’s removal.

“I hope that they treat her with the dignity she deserves, the respect that she deserves. By all accounts, she was an excellent member of the foreign service,” Krishnamoorthi told Reuters.

Krishnamoorthi said the evidence suggested she was removed to make way for the Trump administration’s “irregular channel” of diplomacy in crafting Ukraine policy personally beneficial to Trump in which Giuliani played a central role along with diplomats Sondland and Kurt Volker, as well as Energy Secretary Rick Perry.

The hearing comes a day after House Speaker Nancy Pelosi told reporters that Trump already had admitted to bribery in the Ukraine scandal.

“The bribe is to grant or withhold military assistance in return for a public statement of a fake investigation into the elections,” Pelosi, the top Democrat in Congress, told a news conference.

Pelosi’s comments could offer a preview of articles of impeachment Democrats might put forward.

Two other career U.S. diplomats, William Taylor and George Kent, testified on Wednesday in the first public hearing, expressing alarm over the pressure tactics on Ukraine by Giuliani for investigations that would benefit Trump politically.

Image: Marie Yovanovitch, former U.S. ambassador to Ukraine, is sworn in to testify before a House Intelligence Committee hearing as part of the impeachment inquiry into U.S. President Donald Trump on Capitol Hill in Washington, U.S., November 15, 2019. REUTERS/Jonathan Ernst