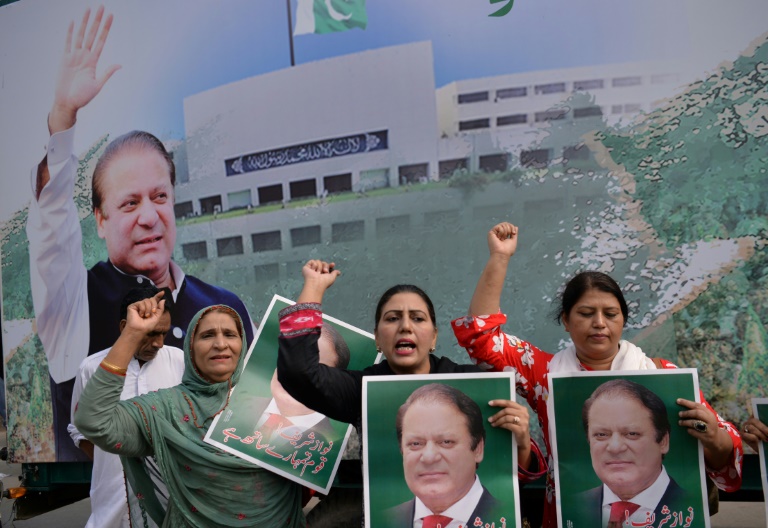 Pakistan authorities locked down parts of Lahore Friday for the return from London of former premier Nawaz Sharif, who faces possible arrest and a 10-year prison sentence ahead of already tense elections his party insists are being rigged.

Sharif was sentenced in absentia last week to 10 years in prison by a corruption court over the purchase of high-end properties in London, dealing a serious blow to his Pakistan Muslim League-Nawaz (PML-N) party’s bid weeks ahead of the July 25 polls.

He has claimed he is being targeted by the military.

“I know that… I will be directly taken to jail,” he said in a video released by his party Friday.

“I want to tell Pakistanis I have been doing this for you… Walk with me, join hands with me and change the destination of the country.”

AFP could not immediately confirm the production date of the video, which showed Sharif seated on a plane.

On Thursday his brother Shahbaz Sharif, who now heads the PML-N, said that hundreds of their workers and supporters had been arrested ahead of Nawaz’s expected return in what he said was “naked” pre-poll rigging against their party.

The younger Sharif has pledged to marshal a welcome for the former prime minister, saying thousands of supporters would travel to Lahore airport to back Nawaz.

“The whole world knows that PML-N is being targeted,” Shahbaz said. “We’ll go to the airport tomorrow despite this brutality, and we will remain completely peaceful.”

Up to 8,000 police officers are set to be deployed in Lahore, according to police chief Sajjad Hasan Man. Containers could be seen blocking some Lahore roads on Friday morning, while travel to and from the airport had reportedly been restricted.

Authorities have pinpointed at least 50 locations in the city to block if needed, according to a police official, who requested anonymity as he was not authorised to speak to the media.

Despite the crackdown, PML-N backers continued to flock to the city, vowing to confront authorities if challenged.

“We are going to airport and if anybody stops us then we are ready to go to jail,” Khurram Ehsan, 36, told AFP.

“We can go beyond our limits for our leader.”

Nawaz left London late Thursday, where his wife is being treated for cancer.

Analyst Zahid Hussain said the ex-leader’s return was the latest chapter in his long confrontation with the country’s security establishment.

“He’s fighting back for his political life,” Hussain told AFP.

However, it remained to be seen how the move would affect his party’s chances ahead of the polls.

Since Nawaz returned to London last month, the PML-N has fallen into disarray and failed to mount an organised campaign to rally the base ahead of the polls.

“Certainly it would have been worse for the party’s prospects had he not come,” Hussain added.

The election will pit the PML-N against its main rival, the Pakistan Tehreek-e-Insaf, which is led by cricket star-turned-politician Imran Khan.

Recent polling has showed PTI’s popularity steadily rising and closing the gap with the PML-N.

The election would be only the second-ever democratic transfer of power in the South Asian country.

Nawaz was the 15th prime minister in Pakistan’s 70-year history — roughly half of it under military rule — to be removed before completing a full term.

Sharif has faced — and fought off — similar challenges in the past.

In 1993 he was sacked from his first term as premier for corruption, while in 1999 he was sentenced to life in prison after his second term in office ended with a military coup.

Following the coup he was allowed to go into exile in Saudi Arabia, returning in 2007 before becoming prime minister for a third time in 2013.

The military remains the most powerful institution in the country, and has faced blistering allegations in recent months that it is pressuring the media and politicians in a bid to manipulate the polls against the PML-N.

The armed forces have denied the accusations, and said they have “no direct role” in the elections.