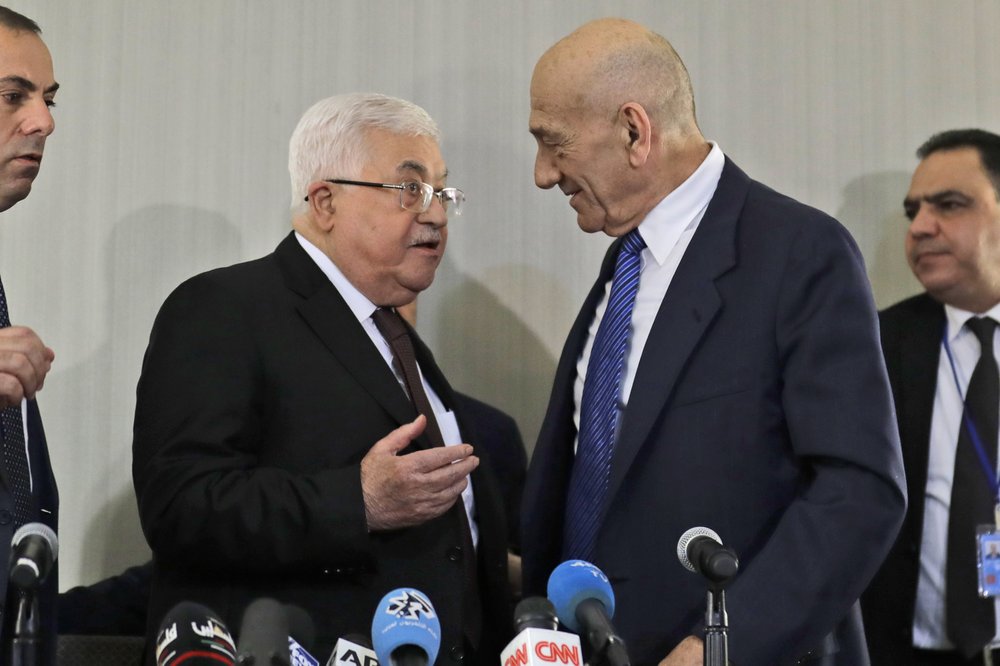 UNITED NATIONS (AP) — Palestinian President Mahmoud Abbas sat beside former Israeli Prime Minister Ehud Olmert on Tuesday and said he is ready to resume negotiations under an international umbrella on the peace deal they made significant progress on in 2008 — not on the Trump administration’s plan that he said destroys a two-state solution to the decades-old Israeli-Palestinian conflict.

Olmert said he thinks Abbas made a mistake in not accepting his 2008 peace plan. But he said now there is a plan put forward by President Donald Trump based on a two-state solution, and if that is a U.S. commitment, it “must be pursued further by all sides, including the Palestinian side.”

The rare joint appearance of the Palestinian Authority president and a former Israeli leader before international media appeared aimed at demonstrating to Israelis in particular, and the wider international community, that the Palestinians once had an Israeli partner they negotiated with seriously — and that they could do so again under the right circumstance.

Olmert offered Abbas a peace plan in 2008 that included a near total Israeli withdrawal from the West Bank, east Jerusalem as the capital of a Palestinian state, international control over Jerusalem’s holy sites, and negotiations on the issue of Palestinian refugees under the Arab Peace Initiative. He said they were “very, very close” to agreement.

But Olmert was forced to resign in July 2008 ahead of a corruption indictment that later sent him to prison for 16 months. Despite this, Olmert said he has remained in contact continually with Abbas over the last 11 to 12 years. And though they disagree on how to handle the U.S. plan, he said Abbas is “a man of peace.”

The press event followed an open meeting of the U.N. Security Council at which the Palestinian leader vehemently rejected the Trump plan and called for an international conference to pursue the two-state solution based on borders before the 1967 Mideast war demanded in numerous U.N. resolutions.

Abbas called the U.S. proposal “an Israeli-American pre-emptive plan in order to put an end to the question of Palestine” and said the disjointed Palestinian state envisioned in the U.S. plan is “like a Swiss cheese.” He said the plan violates numerous U.N. resolutions and annuls Palestinian rights “to self-determination, freedom and independence in our own state,” and thus should not be considered a basis for negotiations.

The Palestinians seek all of the West Bank and east Jerusalem — areas captured by Israel in the 1967 Mideast war — for an independent state and the removal of many of the more than 700,000 Israeli settlers from these areas.

The Trump plan would turn over key parts of the West Bank to Israel, siding with Israel on key contentious issues such as borders and the status of Jerusalem and Jewish settlements.

At the council meeting, Israeli Ambassador Danny Danon said if Abbas really wants peace, he should be in Jerusalem talking to President Benjamin Netanyahu — not at the United Nations.

“Only when he steps down can Israel and the Palestinians move forward,” Danon said of Abbas. “A leader who chooses rejectionism, incitement and glorification of terror can never be a real partner for peace.”

Abbas minutes earlier told the council: “We are fighting terrorism. We are not terrorists.”

Later, he told reporters: “Irrespective of the nature of relationships with our Israeli neighbors, we will not resort to violence. … We want to achieve peace through peaceful negotiations.”

He expressed hope that Abbas and other Palestinian officials “will not ignore” the U.S. commitment for a two-state solution and will work “to establish the necessary framework for negotiations that will promote it.”

“Who will be the partner on the Israeli side, we will know later this year,” he said, alluding to March elections scheduled in Israel, though two elections last year failed to produce a government.

It had been expected that the 15-member Security Council would vote Tuesday on a resolution co-sponsored by Tunisia and Indonesia and backed by the Palestinians opposing the U.S. plan. But the Palestinians said consultations on the text were continuing. Diplomats said it was unclear whether the resolution would receive the minimum nine “yes” votes for approval.

Olmert said everything he has done and is doing now is “for the state of Israel.” He said he told Abbas: “I didn’t come to support him or the campaign of the Palestinian Authority or to speak for them.”

He added that he thinks the majority of Israelis are not on the right politically and do not oppose negotiations with the Palestinians or seek of territory in the West Bank.

U.S. Ambassador Kelly Craft said the U.S. aim is to get the Israelis and Palestinians to the negotiating table to discuss the Trump plan.

“It’s a vision. It’s not a deal,” she said. “It’s an opportunity and I think today was the beginning.”

Palestinian leader to address UN on Trump plan, but no vote