In an effort to encourage tourism, adventurous cyclist Mohamed al-Masry is traveling all across Egypt – visiting a variety of archaeological marvels along the way.

Masry arrived on Sunday in Luxor nine days after his starting point from his village of Basyoun in Gharbia, Nile Delta, traveling more than 1,150 km on his way to reach 1,600 km at the end point in Aswan. 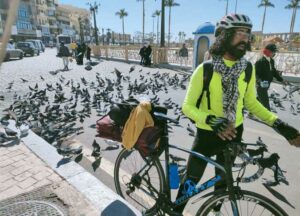 Masry, 28, has two kids, and owns a furniture workshop.

He said that he uses his free time to ride bicycles, which he loves since childhood, and uses them to travel and learn about cities and the nature of their people and landmarks.

Upon his arrival in Luxor, he was greeted by the people of the governorate, led by the Luxor Cycling Team, artists and young people who all encouraged him.

According to Masry, he began his journey from Basyoun to Edko, and from there to Beheira and Alexandria, then went through the desert road to Cairo and from there through the Agricultural Road, passing through governorates of Beni Suef, al-Minya, Assiut, Sohag, Qena, until he reached Luxor and met some of his friends – where he will stay until he journeys to complete his trip to Luxor. 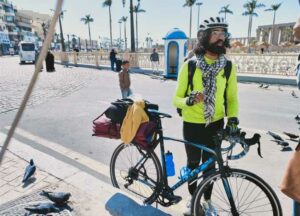 Masry added that since 2014, he has visited tourist and archaeological sites in various governorates, especially Luxor and Aswan, by bicycle to promote them on social media.

In total, he’s made 72 trips during nine years, during which he visited most of Egypt – which helped him to write his first book about 12 of his trips.

Masry indicated that the book also covers the customs and traditions of the people of these governorates, the most famous tourist and archaeological sites, and what distinguishes each governorate from the other.

He explained that during this trip, he was warmly welcome by the people of Luxor and truly felt the hospitality, love and humor that they are characterized by.

The cyclist said he also visited the Karnak Temple and enjoyed all the new developments inside it, which showed the beautiful colors in the columns, in addition to the Road of Sphinxes, which is the pride of all Egyptians and one of the most important projects supporting tourism in Luxor.