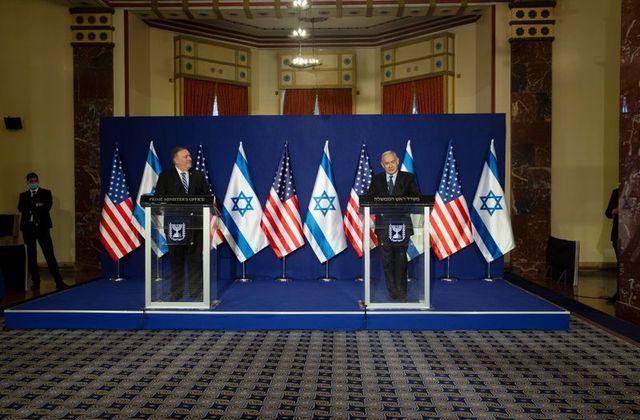 JERUSALEM (Reuters) – US Secretary of State Mike Pompeo said he would visit the Israeli-occupied Golan Heights on Thursday, marking the Trump administration’s break with previous US policy on the strategic plateau.

President Donald Trump in 2019 recognised Israel’s claim of sovereignty over the parts of the Golan that it captured from Syria in a 1967 war and later annexed in a move not recognised by the United Nations and most of the international community.

Nabil Abu Rudeineh, a spokesman for Palestinian President Mahmoud Abbas, said: “Pompeo’s visit to occupied land is an active participation in the occupation.”

Israel says the Golan – which overlooks northern Israel, Syria, Lebanon and Jordan – is a bulwark against Syria and Iranian forces.

Pompeo was also due to visit a settler winery in Psagot, a hilltop Israeli settlement near Ramallah in the occupied West Bank, Haaretz newspaper reported. TV footage showed American flags and what appeared to be security personnel there, while an Israeli military helicopter landed nearby. The US embassy in Israel declined to comment on that trip.

A year ago Pompeo announced that the United States no longer viewed Israel’s settlements as “inconsistent with international law,” in a further reversal of decades of US policy. In response, Psagot named one of its wines after Pompeo.

It is unclear whether Trump’s decision on settlements would be reversed by a future US administration under President-elect Joe Biden. However Biden is expected to take a tougher line on Israeli settlements in general.

“This visit hurts every Palestinian, and is against all international laws,” Palestinian Tourism Minister Rula Maayah told Reuters on Wednesday.

“We hope that things will change in the future with the American (government), and that, again, the Americans will (return to dealing) with settlements as entities against international law.”

Pompeo, who announced new US sanctions on Iran while in Israel, said Washington would also step up action against pro-Palestinian efforts to isolate Israel economically and diplomatically.

“I want you to know that we will immediately take steps to identify organisations that engage in hateful BDS (Boycott, Divestment and Sanctions) conduct and withdraw US government support,” he said.

“We will regard the global anti-Israel BDS campaign as anti-Semitic,” Pompeo said. Supporters of BDS dispute that designation, saying they are against all forms of racism.

“Instead of combating systemic racism and far-right extremism in the United States, the Trump administration is undermining the common fight against the scourge of antisemitism by equating it with peaceful advocacy of boycotts,” said Eric Goldstein, the group’s acting Middle East and North Africa director.