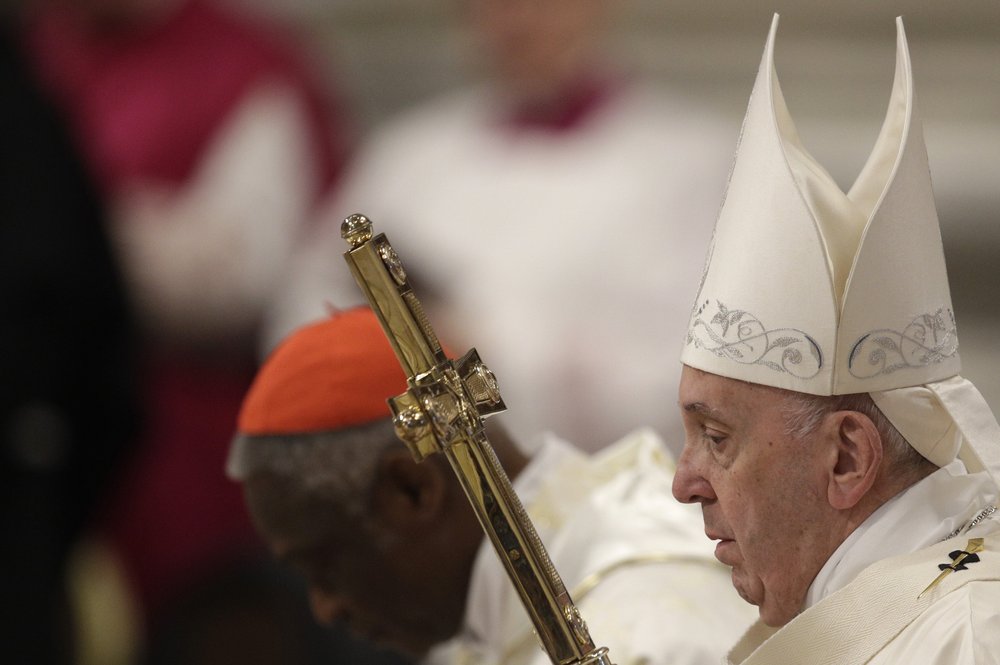 VATICAN CITY (AP) — Pope Francis is pinning much of his hopes for a more peaceful world in the new year on women, saying violence against them is akin to profaning God and calling for them to be increasingly involved in making major decisions.

In his homily Wednesday in St. Peter’s Basilica, Francis decried the “many times women’s bodies are sacrificed on the profane altar of advertisements, of profit, of pornography.” He also lamented that women are ”continually offended, beaten, raped, forced into prostitution” or forced to have abortions. The Catholic church forbids abortion.

Francis didn’t mention if under his watch things might change in how women are treated in the Catholic church. According to Vatican teaching, women can’t become priests. And the top job — the papacy — has been strictly for males.

He contended that if we want a better world in the new year, we should treat women with dignity.

Francis urged that women become ”fully associated” with decision-making in order to make the world more united and at peace.

“And if we want a better world, that is a house of peace and not a courtyard of war, may the dignity of every woman be at the heart of it,″ Francis said. “Women are givers and mediators of peace, and should be fully associated with decision-making processes.”

He added: “For when women can transmit their gifts, the world finds itself more united and more in peace. So, a conquest for women is a conquest for the whole of humanity.”

Francis didn’t comment on how the Catholic church treats women. As well as women not being allowed to be priests, some conservative elements of the Catholic church are scandalized by parishes that allow girls to be altar servers. And, as The Associated Press has reported, there have been instances of priests — who are supposed to be celibate — impregnating women, and then not recognizing the child as their offspring.

Reflecting on the state of affairs of the church, Francis cautioned against divisions, blaming the devil for those who emphasize differences, ideologies and factions.

Image: Pope Francis presides over a Mass for the solemnity of St. Mary at the beginning of the new year, in St. Peter’s Basilica at the Vatican, Wednesday, Jan. 1, 2020. (AP Photo/Gregorio Borgia)

Image: Pope Francis presides over a Mass for the solemnity of St. Mary at the beginning of the new year, in St. Peter’s Basilica at the Vatican, Wednesday, Jan. 1, 2020. (AP Photo/Gregorio Borgia)

Pope visits Jesuit Japan community that could have been his