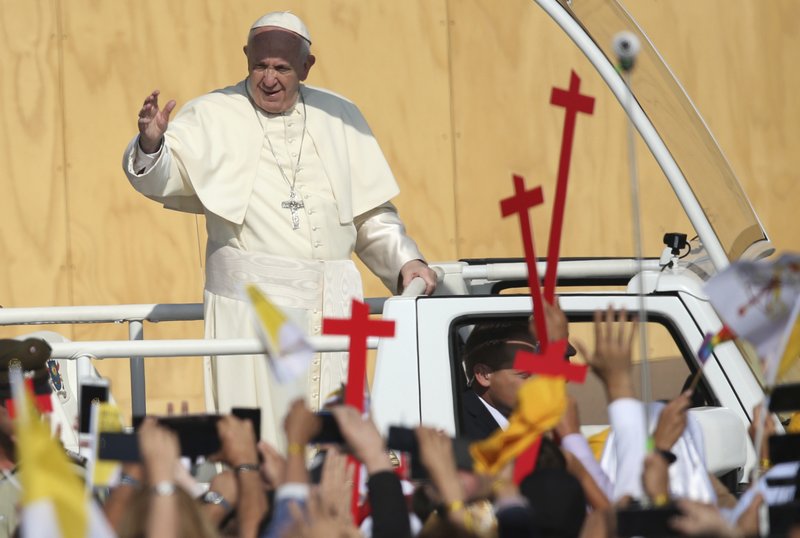 Looking to put Chile’s sex abuse scandal behind him, Pope Francis dives Wednesday into another divisive issue roiling the South American nation: the plight of the indigenous Mapuche and their long-running conflicts with government authorities.

In an ominous reminder of how the centuries-long conflict has occasionally erupted in violence, two Catholic churches were torched in the Araucania region on the eve of Francis’ arrival — one burned to the ground. In total, nine churches in Chile have been hit with gas-soaked cloths since late last week. No group has taken responsibility and no arrests have been made, but in recent years Mapuche activists have burned churches to press their cause.

The Argentine pope is particularly attuned to indigenous issues and hopes to use his weeklong trip to Chile and Peru to put the issue on the global agenda and set the stage for a big church meeting next year on the Amazon and native peoples who live there.

In his opening remarks in Santiago on Tuesday, Francis urged Chileans to listen to indigenous peoples who are “often forgotten, whose rights and culture need to be protected lest that part of this nation’s identity and richness be lost.”

Those initial statements were already reverberating among many in the Mapuche community.

“Saying that we should be respected, that we have a right to exist and be recognized is all very strong,” said Hugo Alcaman, president of ENAMA, a Mapuche group that encourages local businesses and advocates social change. “It’s Chile that has to respond, especially politicians.”

How likely that is remains to be seen, as the conflict is one of Latin America’s longest involving indigenous peoples.

Leaders of both the Mapuche and the Chilean government have expressed hope that Francis can facilitate dialogue. Their disputes date back to the late 19th century, when the Chilean military finally defeated the Mapuche, who had ferociously resisted Spanish and other European settlers for centuries.

Mapuche groups are pushing for ownership of ancestral lands in the southern Araucania region, legal recognition of their language and culture, and a stop to discrimination that leaders say often makes them police targets.

Francis’ trip to Temuco comes after a meeting in Santiago with survivors of clerical sex abuse Tuesday, where he wept with them and asked forgiveness for the “irreparable damage” they suffered. It was only the second time he has met with victims on a foreign trip — he talked with American survivors in the US in 2015 — and the session followed outrage in Chile over a scandal involving a pedophile priest and a years-long church-orchestrated cover-up.

Protests are expected in Temuco, including outside the Maquehue Air Base where the pope will celebrate Mass. It was built on land that was taken from the Mapuche in the early 20th century and remains a point of friction.

While the vast majority of Chile’s estimated 1 million citizens of Mapuche descent oppose using violence, a small number rely on it to push their agenda.

In recent years dozens of churches have been among the targets. Outside one the churches attacked last week, pamphlets extolling the Mapuche cause were found at the scene.

Some 4,000 police officers will be deployed in Temuco’s streets and the pope will be flanked by more than a dozen security vehicles as he rides the popemobile down a central avenue before visiting an order of nuns.

Many Mapuche are hoping Francis comes out with particularly bold statements, as St. John Paul II did when he visited Temuco in 1987.

During his homily then, John Paul said faith in God could overcome all human-caused problems, implicitly referring to friction between Mapuche and the then military dictatorship of Gen. Augusto Pinochet.

“It’s for this reason that the pope, from Temuco, encourages the Mapuches to conserve with healthy pride the culture of its people,” John Paul said, adding that included “the traditions and customs, the language and its own values.

In recent decades, the Mapuche community has made significant strides. Some ancestral lands have been returned, though the program is controversial. University scholarships have been set aside for Mapuche young people and various aspects of Mapuche culture, such as many foods, have become part of the mainstream.

“What do you see? The burning of trucks, Mapuches in jail,” she said. “What you don’t see is what is behind all that.”

“If people are repressed for hundreds and hundreds of years, it’s obvious they are going to fight back,” she added.

Pope Tawadros: Cathedral of Christ's Nativity is a message of love to the world