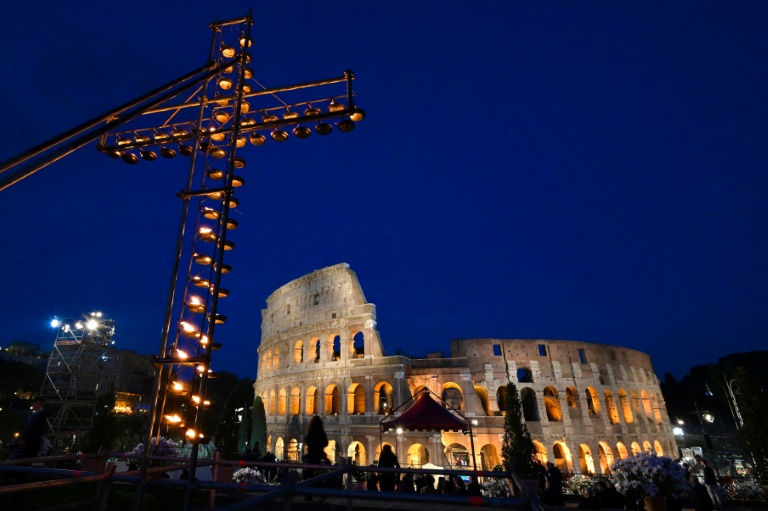 Pope Francis on Friday led the traditional Easter week “Way of the Cross” procession in Rome, which was this year took the theme of modern-day slavery and human trafficking, including the prostitutes who ply their trade on Italy’s streets.

The ceremony, taking place on Good Friday in the Christian calendar which marks the day Christ was crucified, took its theme from meditations written by Catholic nun Eugenia Bonetti, who has spent much of her life in Africa and also attended the event.

The event spotlighted sex slaves “used” but “condemned by a society which refuses to see this kind of exploitation”.

The text was read aloud as the procession continued through the streets of Rome, ending outside the iconic Coliseum, once the site of persecution against Christians under the Roman Empire.

Pope Francis, in a prayer at the end of the ceremony, spoke of “the cross of those who thirst for justice and peace”.

Around 20,000 Christian faithful gathered around the great Roman amphitheater, many holding lighted candles following the evening ceremony in silence.

The Pope spoke of those bearing “all the crosses of the world” including “those who hunger for bread and for love” and “those who find doors closed because of fear, and hearts sealed by political calculations”.

The Argentinian pontiff also alluded to the secularization of modern society, where the faithful “we believing in you and trying to live according to your word, find themselves marginalized and discarded even by their families and their peers”.

Pope tells Moroccans, 'We are brothers and sisters'