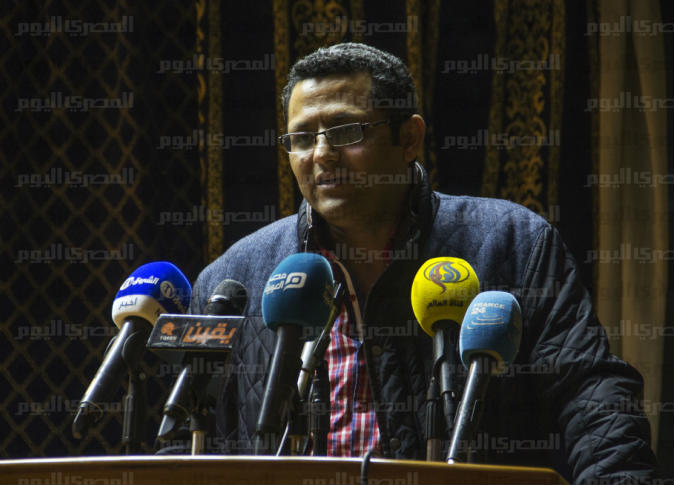 Egypt's press syndicate gave the interior ministry an ultimatum on Tuesday demanding the withdrawal of an arrest order against syndicate official Khaled al-Balshy within 48 hours.

Egyptian prosecutors issued on Monday an arrest warrant against the head of the press syndicate's freedoms committee on charges of inciting protests, disturbing public peace and calling for the overthrow of the government through social media networks as well as insulting the interior ministry.

Balshy, who is also the chief editor of al-Bedaiah news website, said that the complaint was filed against him by the assistant to the interior minister for legal affairs.

The press syndicate's Secretary General Gamal Abdel Raheem told Aswat Masriya that the syndicate's council reached the decision, to give the interior ministry a 48 hour ultimatum, in an emergency meeting on Tuesday.

"Measures to escalate will be considered" if the interior ministry fails to withdraw the arrest order in time, Abdel Rahim said.

Abdel Rahim added the council decided that Balshy will not appear before the prosecution unless the press syndicate receives official notice of the arrest.

More than 20 Egyptian rights groups, political parties and prominent figures expressed their utmost concern over press freedom in the context of the latest decision to arrest Khaled al-Balshy in a statement released Tuesday.

The Arabic Network for Human Rights Information (ANHRI) and the Egyptian Initiative for Personal Rights (EIPR), among others, considered the arrest warrant "the latest in a series of measures that target journalists, critics and opponents to the state."

They further demanded that authorities uphold constitutional rights and halt the "heightened attack" on press freedom.

Known to be an ardent defender of press freedom, Balshy led numerous press syndicate initiatives in solidarity with detained and forcibly disappeared journalists.

"The case is not personal;it is about press freedom in general and all detained journalists," Balshy stated via al-Bedaiah news website.

In several instances, the syndicate filed reports with the general prosecution accusing security forces of violating the law when journalists' whereabouts and the charges against them were unknown.

The Egyptian interior ministry has denied, on a number of occasions, the existence of any cases of enforced disappearance or torture. However in mid-January, the ministry disclosed the whereabouts of over 100 people who were allegedly subjected to forced disappearances in response to an inquiry by the National Council for Human Rights.

The Committee to Protect Journalists (CPJ) stated in an October report that Egypt has maintained an "intense crackdown on journalists" in 2015, "with record numbers of people behind bars for their reporting."

Later in the same year, CPJ said that Egypt is the "second worst jailer of journalists" worldwide.