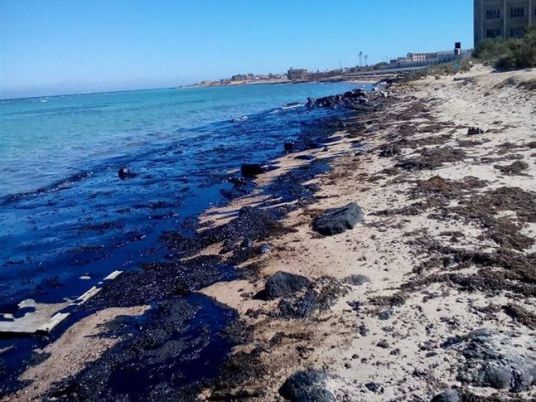 Residents in the Red Sea city of Ras Gharib have pleaded for authorities to help remove an oil spill that has stretched along its shores and created piles of dead fish.
Oil spills have become common for the city over the past years, discouraging locals and visitors from using its beaches, some residents say.
Local environment and contamination control authorities have been approached over the past 48 hours to address the phenomenon, which has blackened the sand and rocks.
Mohamed Helmy, head of Ras Gharib’s city council, said he had directed environment workers to head to the scene, review the situation and identify the source of the leak.
But locals told Al-Masry Al-Youm that previous efforts to determine the source of the recurrent contamination were futile.
“Officials have to save us and end the crisis,” one fisherman said. “Huge amounts of fish die and are cast ashore, making them a serious threat for humans if eaten.”
“We once found a turtle of a rare species dead on the beach, with its shell eaten away,” Amr Hammaden, a resident of Ras Gharib said. “It smelled like chemicals and had probably died from the petroleum contamination.”
Edited translation from Al-Masry Al-Youm