Rebel gains which have broken a Syrian government siege in the city of Aleppo will strengthen the opposition's hand should a new round of peace talks go ahead, an opposition negotiator told Reuters.

Previous rounds collapsed earlier this year when the opposition objected to the forces of President Bashar al-Assad and his Russian allies continuing to bomb and besiege rebel-held areas while the Geneva talks were seeking a political solution to the Syrian conflict.

Bassma Kodmani, a member and spokeswoman of the opposition High Negotiations Committee (HNC), said Damascus and Moscow had to recognize that last week's advance in Aleppo had changed the facts on the ground.

"Before this offensive [the Russians] believed they could bring us to their negotiating table and impose a national unity government with Assad remaining in power," she said in an interview.

"The message from the ground was: we are not going to let this happen. You do not strangle and suffocate a whole city and use it to impose your view of what a political solution should be," she added. "I think it has given a little bit more leverage to the opposition."

An August 1 deadline for establishing a transitional authority for Syria that would lead to elections in 18 months has come and gone, but United Nations envoy Staffan de Mistura said he now hopes to reconvene talks in late August. Russia and the United States say they are discussing how to reduce violence in the country before any negotiations.

Kodmani said a deal was as remote as ever. "We are nowhere close to even drawing what a political transition should look like," she said.

The rebel assault broke the month-long siege of rebel-held eastern Aleppo where about 250,000 people are living in deteriorating humanitarian conditions.

It set back Assad's hopes of using Russian air strikes to reclaim what was Syria's most populous city before the war, attend peace talks in a militarily strong position and speed the end of the five-year conflict with him still in power.

Kodmani said the HNC still wants a political solution, but the plight of those in bombarded eastern Aleppo had compelled moderate rebels to cooperate with more radical groups in breaking the siege.

"There was no reaction from the international community [to the siege]…the whole world was watching in silence what was going on," she said.

The HNC is pressing for the restoration of a 'cessation of hostilities' deal brokered in February by Washington and Moscow, but which collapsed due to the escalating violence centered on Aleppo.

"We wanted to see a restoration of the cessation of hostilities because that would allow (the HNC) and the opposition to immediately see that the moderate groups can organize life, communities and security," Kodmani said.

"The more radical groups would be marginalized because their value resides in their firepower. Instead what we saw was exactly the opposite… the moderate groups [were left] with no choice but to join forces with those who can, together, lead an offensive of some significance."

By far the rebels' biggest coordinated assault since the conflict began in 2011, the Aleppo offensive united around 6,000-8,000 fighters from disparate groups.

These ranged from the Islamist alliance Jaish al-Fateh, which includes Jabhat Fateh al-Sham, known as the Nusra Front until it cut ties with al Qaeda two weeks ago, to the Free Syrian Army (FSA), vetted and backed by the West.

The HNC will present in the next couple of weeks its detailed vision for a political transition, but Assad's government is not willing to negotiate, Kodmani said.

"We need a lot of heavy lifting between Russia, the US, the UN and other players … On the regime side we have not seen so far any willingness to engage in good faith, so at the moment I think intensive international consultations need to take place."

Although some food has entered in recent days, eastern Aleppo continues to suffer heavy air strikes.

Russia said on Wednesday that daily three-hour ceasefires would be declared to allow deliveries of aid supplies, but there has been no let up in the air strikes.

Kodmani said this move, like the Russian offer two weeks ago of 'humanitarian corridors' for people to leave the city, was a cynical and unilateral move which was not discussed with opposition groups.

"The purpose of the humanitarian corridors was to evacuate people, to force people to get out. It was basically: 'leave the city or be bombed'. It was not about bringing relief into the eastern part of the city."

The UN said three hours was not enough and it wanted a 48-hour weekly halt to the violence to deliver aid and evacuate the sick.

Kodmani welcomed the UN calls for a longer pause in fighting, but said this was not a long-term solution. "These measures are again only a way of relieving in a very provisional way, momentarily, a disastrous situation." 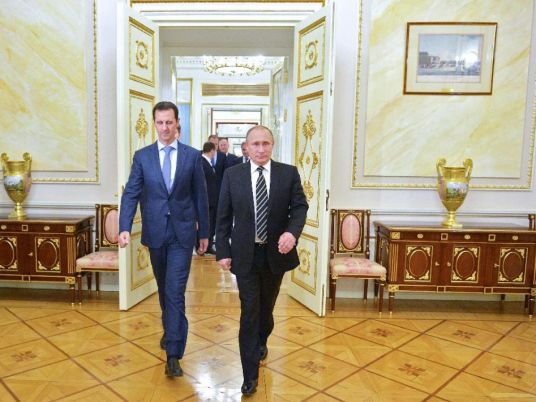 Putin signs Syria base deal, cementing Russian presence there for half a century