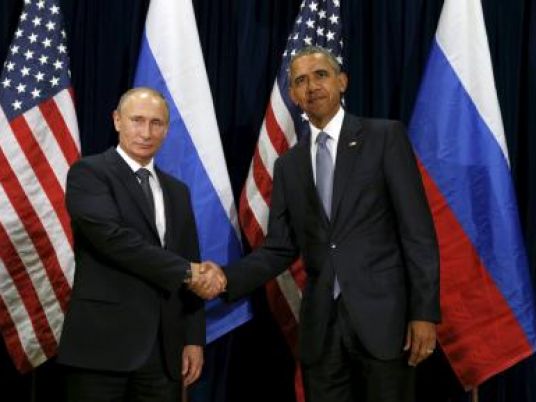 Reports of heavy civilian casualties from Russia’s bombing campaign in Syria are one key reason why Washington is unlikely to coordinate airstrikes with Moscow against Islamic State, US officials told Reuters, even as President Barack Obama left the door ajar on Tuesday to military cooperation with the Kremlin.
Appearing at a White House news conference with his French counterpart, Francois Hollande, Obama reiterated that Russia was "welcome to be part of this broad-based coalition that we've set up." But first, he said, it must shift its focus from propping up Syrian President Bashar al-Assad and redirect its airstrikes away from moderate rebels to hit Islamic State militants.
US officials, however, said there are other obstacles to Russian participation in the US-led coalition of some 60 nations that is hitting the Islamic State in Syria and Iraq.
From the White House to the Pentagon, officials are concerned about widespread reports of mounting civilian casualties from Russian air strikes, even though the issue has received far less public attention than the Assad government's use of "barrel bombs" against unarmed civilians.
The United States, by working with Moscow militarily in Syria, could be seen as complicit in the killing and wounding of civilians, US officials said, speaking on condition of anonymity.
They also said they feared that US-Russian military cooperation would strain US ties with moderate rebel groups, some of whom Washington is backing militarily.
A US official said that Russia’s apparent lack of regard for civilian casualties was one of the reasons the United States has been reluctant to partner with Moscow. The official noted the lengths that the United States has gone to prevent civilian deaths, describing it as a core part of the US-led coalition’s strategy in Syria.
Worry over casual ties and allies
US officials said they did not dispute Syrian human rights activists' allegations that Russian bombs and missiles have hit mosques, hospitals and other civilian infrastructure, killing hundreds of people.
Colonel Steve Warren, a Baghdad-based spokesman for the US-led coalition, said the US military believes private estimates from non-governmental groups of the civilian death toll were probably "fairly accurate."
The Syrian Observatory for Human Rights said in a November 20 report that at least 403 civilians, including more than 160 women and children, had died in Russian airstrikes. Other organizations have different estimates.
"This is sloppy military work," Warren said of the Russian airstrikes. "This is the reckless and irresponsible, imprecise and frankly uncaring approach to operations in Syria that the Russians have taken on."
Russia says its airstrikes are directed against the Islamic State, and it denies that it has killed civilians. It said earlier this month that it was "outraged" by a report by a US organization, Physicians for Human Rights, that alleged it had bombed 10 medical facilities in October.
"Dumb bombs"
Fadel Abdul Ghany, the head of the Syrian Network for Human Rights, put his organization’s latest count of civilian deaths in Russian airstrikes at 265. Most Russian attacks have been in opposition-held areas of northeastern Idlib Province, neighboring Latakia Province and around the contested northern city of Aleppo, he said.
The Obama administration has been careful to avoid calling attention to the civilian casualties. Washington is vulnerable to criticism for its own airstrikes that US officials say inadvertently killed civilians in Iraq and Afghanistan, most recently last month in a hospital in the northern Afghan province of Kunduz.
One reason why Russia's airstrikes are killing civilians, according to US officials, is its heavy reliance on "dumb bombs," as opposed to precision-guided munitions. One US government source also said many of Russia's targets in Syria have been supplied by Assad's government.
The United Nations estimates that some 250,000 people have died in Syria’s civil war and 11 million uprooted from their homes, including more than 4 million who have fled the country.
The administration has other concerns about closer military cooperation with Russian President Vladimir Putin, who has called for coordinating airstrikes with the US-led coalition.
Washington has had rocky relations with many of the Syrian rebel groups that it has armed. Even if Russia shifted the focus of its airstrikes to the Islamic State, US officials worry that allying with Russia could fray relations further.
Finally, Putin’s failure to ensure that pro-Russian rebels in eastern Ukraine implement a February 2015 peace deal is yet another factor, the officials said.
Lieutenant General Ben Hodges, the commander of US Army forces in Europe, said Putin's openness to coordinating militarily with Washington is making America's Eastern European allies uneasy.
"There is concern amongst several East European allies and Ukraine that this will allow Russia to sort of come out of its isolation," Hodges told Reuters, referring to the international sanctions imposed on Russia for its invasion of Ukraine.
Further dampening prospects of US-Russian cooperation, NATO ally Turkey, shot down a Russian fighter jet on Tuesday. It accused Moscow of violating its airspace as it carries out strikes against non-Islamic State targets across the border in Syria.
Until now, communication between the United States and Russian militaries on Syria has been limited to contacts aimed at avoiding an accidental clash in the skies as they carry out rival bombing campaigns.