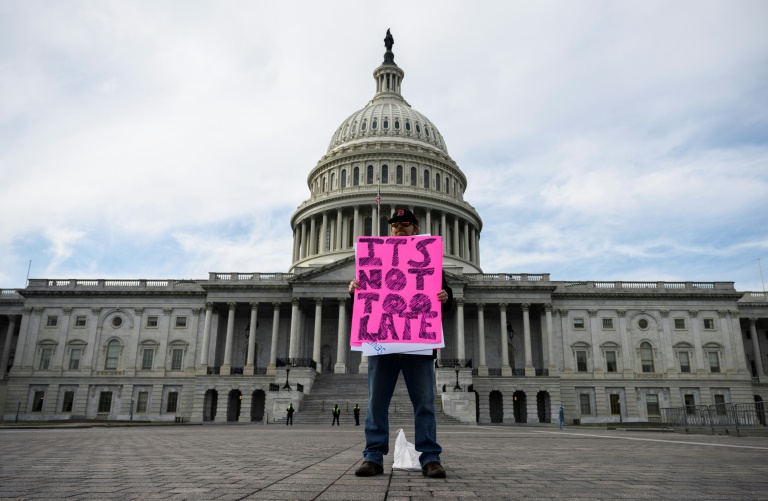 Republicans prepared to defend their expected acquittal of President Donald Trump, on Sunday’s TV talk shows, after their Senate votes to reject witness testimony at his impeachment trial sparked criticism they were aiding a cover-up and abdicating their duties.

Criticism only intensified late Saturday after US media reported that US officials cited presidential privilege in redacting 24 emails related to Trump’s hold on military assistance to Ukraine, an issue at the heart of his impeachment trial for abuse of power and obstruction of Congress.

Trump on Saturday claimed his polling numbers were up after the Senate paved the way for his acquittal next Wednesday.

However, according to the RealClearPolitics website, Trump currently has a 44.6 percent approval rating in collated polls, almost exactly the same as when he came to office in January 2017.

His assertion, made on Twitter, came with Washington also awaiting the results of Monday’s all-important Iowa caucuses.

The first vote in the US primary process will be closely watched as a sign as to which of 11 Democratic candidates are gaining early momentum to challenge Trump in November’s election.

As Democratic contenders raced across the Midwest state, the US Senate on Friday rebuffed Democratic calls for witnesses at only the third impeachment trial of a US president.

Trump is all but assured of being acquitted by the Senate, where Republicans hold 53 seats to 47 for the Democrats. A two-thirds majority, or 67 senators, is needed to remove a president from office.

“Trump poll numbers are the highest since election, despite constant phony Witch Hunts!” the president tweeted on Saturday from his Mar-a-Lago resort in Florida.

He was impeached for abuse of power over pressure on Ukraine to open investigations including into a leading Democratic challenger, Joe Biden.

On Friday, just two Republican senators — Mitt Romney of Utah and Susan Collins of Maine — joined Democrats in voting to introduce witnesses into the impeachment trial.

Democrats argued that every other impeachment trial of US officials has called witnesses.

“America will remember this day — a day when the United States Senate did not live up to its responsibilities, turned away from truth and instead went along with a sham trial,” Schumer said.

Nancy Pelosi, the Democratic speaker of the House of Representatives, which impeached Trump on December 18, accused Republicans of being “accomplices to the president’s cover-up.”

Democrats had been eager to hear from Bolton following reports that, in a forthcoming book, he says Trump told him military aid to Ukraine was tied to Kiev’s investigating former vice president Biden.

That is the crux of the case against Trump.

Republican Senate Majority Leader Mitch McConnell, a Trump ally, said House prosecutors — known as “managers” — had already presented enough evidence to make their case and there was no need for further witnesses.

Among the material was more than 28,000 pages of documents gathered during the House impeachment inquiry.

Just hours after the vote to reject any witness testimony, reports pointed to new potential evidence.

The administration’s Office of Management and Budget (OMB) said in a court filing that it “has redacted portions of 24 documents pursuant to the Presidential Communications Privilege,” according to US media.

These emails “reflect communications by either the President, the Vice President, or the President’s immediate advisors regarding Presidential decision-making about the scope, duration, and purpose of the hold on military assistance to Ukraine,” OMB’s deputy general counsel Heather Walsh said in the court document cited by media.

McConnell said the Senate would resume as a court of impeachment on Monday to hear final arguments, before voting on Wednesday on the two articles of impeachment passed last month in the House.

Republican Senator Lamar Alexander of Tennessee, who had been considered a possible swing vote on witnesses, said there was no need for more evidence.

“If you have eight witnesses who say someone left the scene of an accident, why do you need nine?,” he told NBC in an interview to air Sunday.

But, he added, “I think he shouldn’t have done it. I think it was wrong. Inappropriate was the way I’d say — improper, crossing the line.”

Four contenders for the Democratic nomination — Senators Bernie Sanders, Elizabeth Warren, Amy Klobuchar and Michael Bennet — were required to be present at the impeachment trial.

Monday’s vote is headed to a photo finish, with leftist Sanders holding a narrow polling lead over Biden.