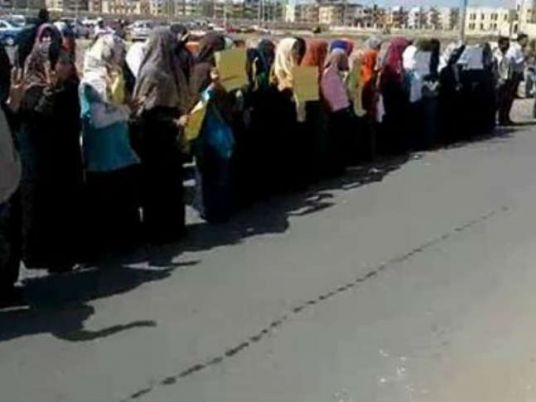 A Cairo court sentenced 188 supporters of ousted Islamist president Mohamed Morsi to death Tuesday over the killing of 13 policemen in a village on the outskirts of Cairo on August 14, 2013.

The defendants were found guilty of killing the officers in Kerdassa on the day security forces forcibly dispersed two pro-Morsi protest camps in Cairo in an operation that left hundreds of demonstrators dead.

"Mass death sentences are fast losing Egypt's judiciary whatever reputation for independence it once had," Sarah Leah Whitson, HRW's Middle East and North Africa director, said in a statement.

"Instead of weighing the evidence against each person, judges are convicting defendants en masse without regard for fair trial standards."

Egyptian courts have sentenced hundreds of Morsi supporters to lengthy jail terms and many to death after speedy mass trials, which the United Nations called "unprecedented in recent history".

The government crackdown on Morsi supporters since the army ousted him on July 3 last year has resulted in at least 1,400 people dead and thousands jailed.

Several leaders of Muslim Brotherhood, including Morsi, are themselves on trial in cases which carry the death penalty if convicted.

"It is quite telling that the sentencing… was handed down in the same week that the case against former president Hosni Mubarak was dropped," said Hassiba Hadj Sahrouai, deputy director for the Middle East and North Africa.

"This is blatantly a case of justice being meted out based on a political whim."

The European Union too shared its "serious concerns" over Tuesday's ruling, adding that it will follow such cases of mass death sentencing "very closely".

"The EU reiterates its call on the Egyptian judicial authorities to ensure, in line with international standards, the defendants' rights to a fair and timely trial based on clear charges and proper and independent investigations," Catherine Ray, spokeswoman for EU foreign affairs chief Federica Mogherini said in a statement.

A Cairo court on Saturday dismissed murder and corruption charges against Mubarak and seven aides in a case involving the deaths of some of the roughly 800 demonstrators killed during the 2011 revolt that ended the veteran leader's three-decades old rule.

The prosecution has filed an appeal against the Mubarak verdict.